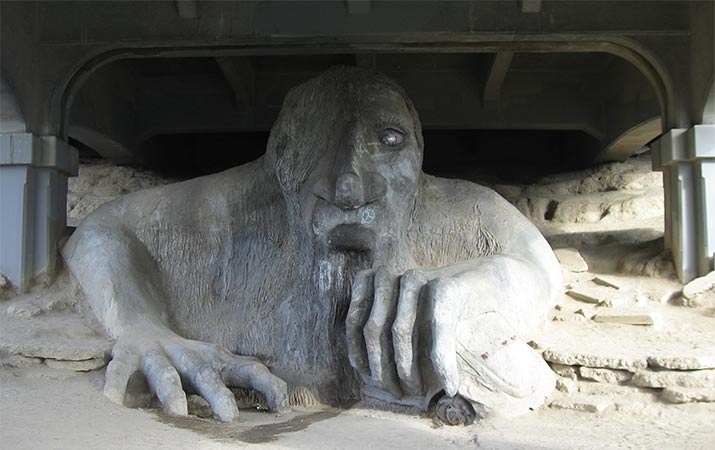 On a trip to Seattle, the Fremont Troll was something to see.

The Pacific Northwest has many bridges, some quite long, such as the bridge from Oregon to Washington over the Columbia River, bridges that connect islands to the mainland, a bridge for trains and pedestrians only, suspension bridge high above the trees in British Columbia, 19th century covered bridges.

At Cascade Locks on the Columbia River, Bridge of the Gods is for hikers. In Native American legends, Bridge of the Gods was originally a rock bridge, given by Manito, the Great Spirit, to the people so they could cross the river. A beautiful maiden, Loowit, guarded the bridge (and later she was transformed by Manito into a spectacular mountain, Mount St. Helens).

And in Seattle, under the Aurora Bridge, is a troll.

The Fremont Troll is a gigantic, one-eyed concrete troll, clutching a squashed car in its paw. Not an ancient troll, it appeared out of nowhere on Halloween in 1990.

Inspired by Hannah West in Center of the Universe, a mystery about the Fremont neighborhood, we had to see the troll for ourselves. It’s located at N 36th St. and Troll Avenue N., under the Aurora Bridge. (Tip: The troll is not located at the blue and orange Fremont Bridge, close by.)

After seeing the Fremont Troll, we started to wonder about more monsters under the bridges in the Pacific Northwest? 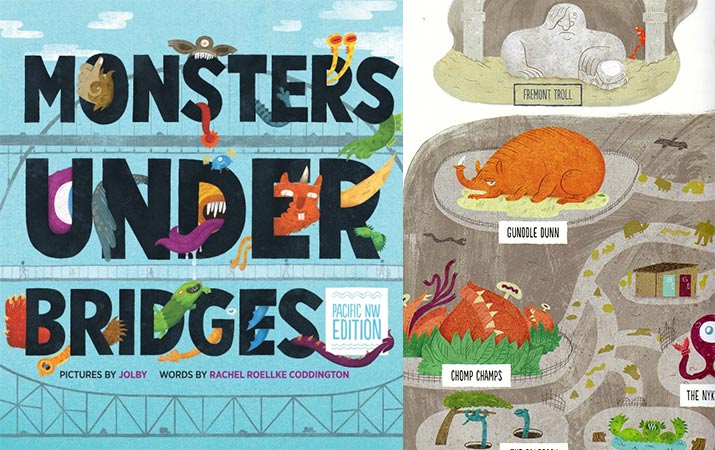 And here’s the book that started us on our search for the Fremont Troll: