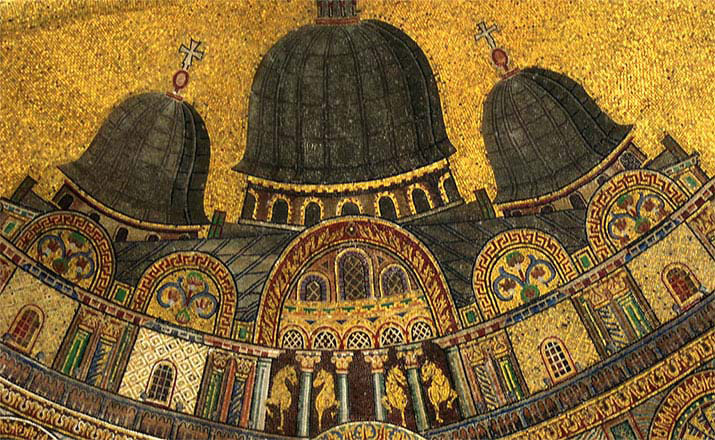 St. Mark’s Basilica is a “must see” in Venice, and here’s a few tips to have fun visiting the church, how to avoid long lines, find the only restroom inside, and discover golden treasures.

Also, highlights of our favorite things to see with kids at Basilica San Marco.

Tips for families at St. Mark’s 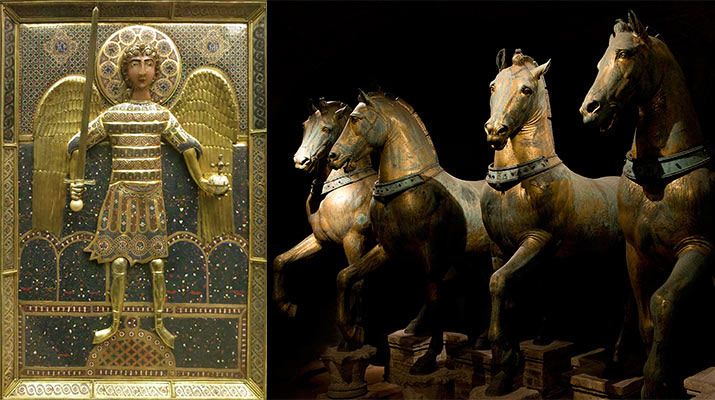 Tip: Our recommendations for a route through the basilica are, after entering the atrium, first climb up the stairs to the Loggia – Museo di San Marco (San Marco Museum). Then go back downstairs, see the Treasury, view the Pala d’Oro and sarcophagus of St. Mark, then follow around on the north aisle, which will exit the church. Outside, spend time looking at the extraordinary exterior facades of St. Mark’s Basilica.

Passing through the bookstore, check out the three wooden models of St. Mark’s at earlier eras, the cutaway provides a sense of the many levels of the church, from crypt, to the domes above.

Go outside to the Loggia to see four great bronze horses (these are replicas, the originals are in the museum, which you’ll get to shortly). Look over into the Piazza, and pretend you’re a doge, viewing the popular in the square below. Walk south on the Loggia, where there’s stellar views of the Doge’s Palace upper stories, and two columns with St. Theodore and winged lion in the Piazzetta.

After exploring the Loggia, go into the Museo di San Marco (San Marco Museum), and there’s the four original gilded bronze horses (quadriga)! The horses, a chariot team, were made by the Greeks or Romans centuries ago, the Venetians took them from Constantinople in 1204, and displayed them on the Loggia terrace for everyone to see. Later, Napoleon stole the horses and carted them off to Paris, but eventually the quadriga returned to Venice.

In the museum is a lovely exhibit of mosaic fragments, re-assembled from other parts of the church. Here kids can see basilica mosaics up close – figures such as St. Mark, prophet Isaiah, kings David and Solomon, Virgin Mary and child, St. Peter – and admire thousands of tesserae put together to make a picture. The golden tesserae are tiny glass pieces, covered with real gold leaf!

Continue down the hall, where you’ll pass by more mosaics (Tree of Jesse is quite splashy) to the Sala dei Banchetti room, exhibiting tapestries and a red velvet doge’s throne, then there’s a restroom (also vending machine with water bottles along the way).

The Venetians had a good eye for treasures when they looted Constantinople in 1204, and the Treasury has an amazing collection, along with artistry of Venetian goldsmiths.

On the left, check out the reliquary of Doge Pietro Orseolo. A large reliquary, at the bottom is a lion, then two leg bones, topped by the doge’s hat (corno) and golden halo. In the next case with five arm reliquaries, don’t miss the St. George reliquary – on the crystal lid, St. George on horseback spears a lovely dragon.

In the other room, look for a stellar 11th century Byzantine icon of archangel Michael holding a sword and orb, medieval chalices of precious stones such as sardonyx, turquoise and chalcedony, alabaster vases from Egypt 300 BC, cloisonne gold and silver box with pieces of the True Cross, 14th century iron dagger of St. Peter, rock crystal dishes and candlesticks, and a domed silver casket shaped like a church, decorated with griffins and lions.

The Pala d’Oro (Golden Altarpiece), made in Byzantium in the 12th century, is covered with precious stones and cloisonne enamel. In the center, Christ is surrounded by the four Evangelists, Matthew, Mark, Luke and John (pearl halos), and the Apostles. On the top frieze, in the center is a spectacular blue and gold enamel archangel Michael.

In front of the Pala d’Oro is the marble sarcophagus of St. Mark. Four alabaster columns, completely decorated with scenes from the life of Mary and Jesus, support a green canopy. Above in the dome is a mosaic of Christ the Pantocrater. This is the center point of the basilica. 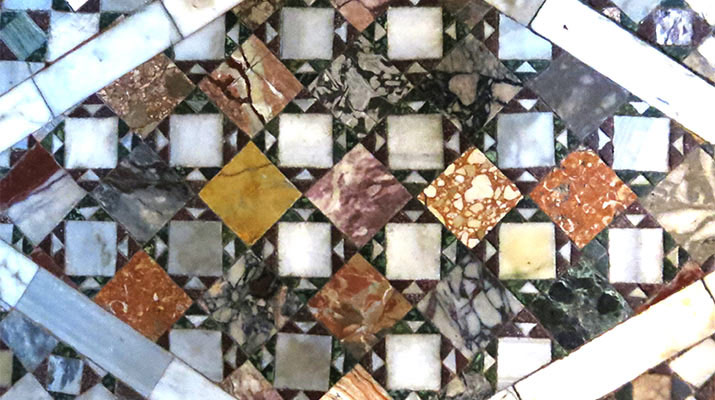 Given the route through the basilica and crowds of people, it’s a bit difficult to see the dazzling marble floors. The entire basilica floor is covered with colored marble geometric patterns – circles, triangles, diamonds, squares, rectangles, hexagons, octagons, in red, green, yellow, black and white – and tiny tesserae animal designs of peacocks, doves, roosters, foxes, even a rhinoceros. Look for the two peacocks as you walk through the south and north aisles, these are easy to see.

After exploring the church interior, take a break, get a snack, then go look at the extraordinary south, west and north facades of St. Mark’s Basilica. (Binoculars comes in handy here.)

Start with the south facade, facing the water next to the Doge’s Palace. At the bottom of the tower are goodies brought from Constantinople – the Tetrarchs, a 4th century statue of red granite, with four figures (co-emperors of the Roman emperor Diocletian) along with stone reliefs embedded in the wall (find the exquisite Byzantine peacocks and griffins). 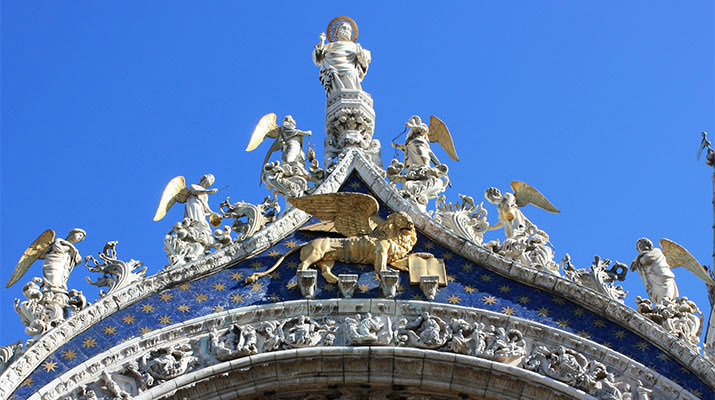 The west facade is simply unique, and created to make an impression, it certainly does. Stand in the middle of the piazza and look up. The central door (portal) is flanked by two doors on each side. Each portal is ornamented with multicolor, swirly marble columns (160 total) brought from Byzantium. Above each door are golden mosaics portraying events in the life of St. Mark.

Above the central portal, look up to the loggia with the four bronze horses. Above the loggia, the lion of St. Mark is surrounded by golden stars on a blue background, and topping it all off, a statue of St. Mark and rows of angels.

The north facade overlooks the little square with a red marble lion kids can climb all over. Look up at the relief panel with twelve lambs (representing the twelve Apostles). To the left is the Door of Flowers (Porta dei Fiori), topped with a carved nativity scene of Mary, Joseph, and two oxen protectively looking over the baby Jesus.

A visit to St. Mark’s Basilica with kids is fabulous, extraordinary, like-no-other, but also can be frustrating with the set route along the aisles. The most important thing, take time to look – every inch of the church is like opening a treasure chest.

ALL TEXT AND IMAGES ARE COPYRIGHTED!