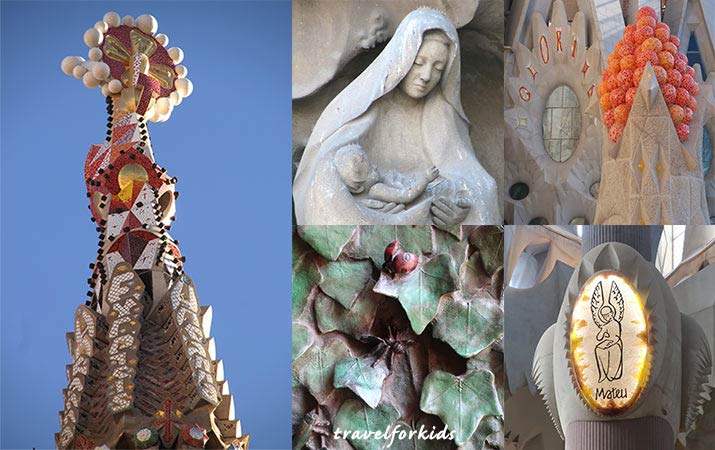 Coming the Sagrada Familia basilica in Barcelona, do not be surprised to see building cranes along with soaring towers high in the sky.

Construction of this church is ongoing, although Antoni Gaudi created his designs for the Sagrada Familia more than a century ago.

Gaudi spent four decades working on the Sagrada Familia, from 1883 – 1926, and envisioned the basilica as a symbol of Christianity – birth, death and resurrection, and glory of Jesus Christ. He was also inspired by nature, and his designs incorporate animals, plants, trees, and flowers into the form of the church.

Gaudi made detailed plans and models for the whole basilica, but only the Nativity Facade, crypt, apse and one tower were built in his lifetime. Over the next century, more architects, sculptors, artists, builders have interpreted and constructed Gaudi’s designs.

This post will help kids become familiar with what’s portrayed inside and outside the basilica, inspiration from nature, and symbolism of Gaudi’s designs.

Tip: Be sure to have binoculars with you, things described below may be way high up on the church. 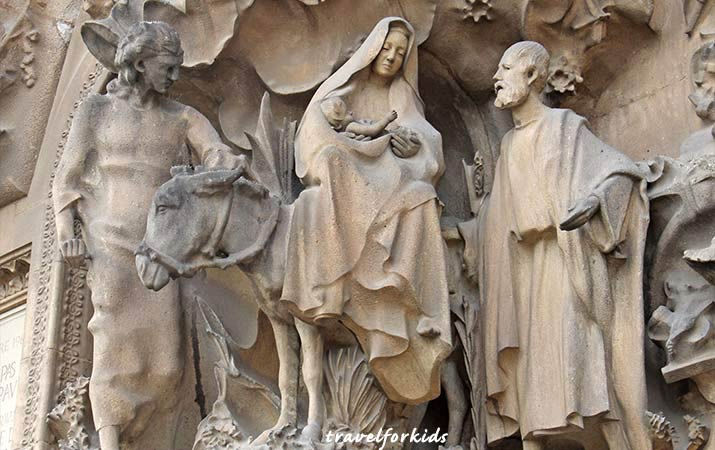 Scenes from the Bible are portrayed in sculpture, represent the joyful birth of Jesus, family events and early childhood.

There’s so much rich detail on the Nativity Facade, spend some time looking before going inside the basilica.

The biblical scenes in the central Charity portal are familiar, starting with the first sculpture group above the doors – birth of Jesus in Bethlehem, shepherds kneeling, the Three Wise men holding gifts (Adoration of the Magi). 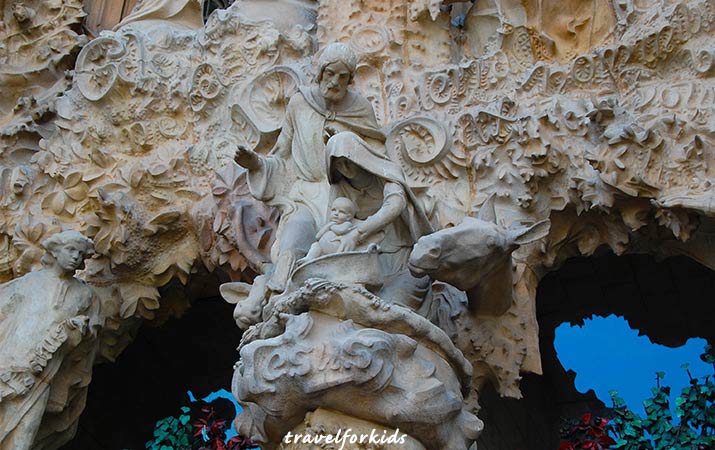 Mary holds the baby Jesus, Joseph tenderly standing over her, surrounded by a donkey and ox. Above left are the words “Gloria in excelsis Deo” (Glory to God in the highest), words said by the angels announcing Jesus’ birth. 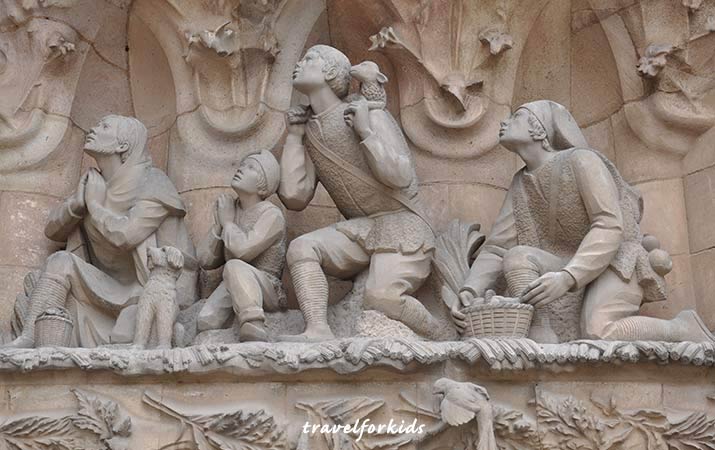 On the right side, shepherds kneel in adoration of the birth, on the left, the three Wise Men bring gifts to the newborn baby. 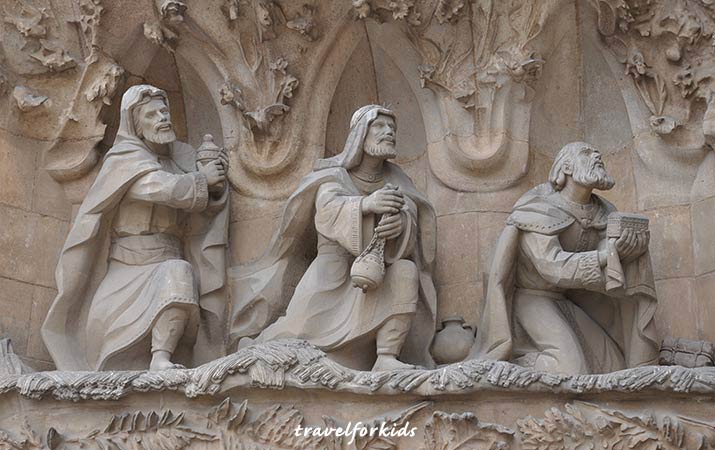 Next level are a group of angels singing in the center, six angel musicians on either side, each playing a different instrument – harp, bagpipe, tambourine, guitar, horn, violin.

Further up the facade is the Annunciation, Mary and the archangel Gabriel telling her she will be the mother of Jesus.

With binoculars, look way up to the pinnacle on top – this the Tree of Life. White doves (symbol of the Holy Spirit) perch on a dark green cypress tree, topped with the Greek symbol for Jesus and a single dove.

Animals on the facade

Typical farm animals are featured in Biblical scenes on the facade – donkey and ox in the Bethlehem scene, shepherds have a dog and lamb, look for groups of ducks, chickens and turkeys.

In the Flight from Egypt on the left door, Mary rides on a donkey (Gaudi used a live donkey as a model) underneath are turkeys. 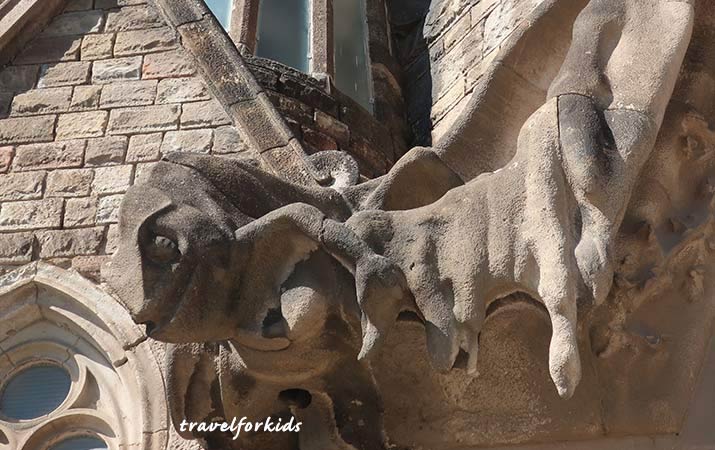 Each far side of the Hope and Faith portals is ornamented with a large chameleon, gliding off the roofline (photo above) – the chameleon represents earthly changes.

Angels on the facade 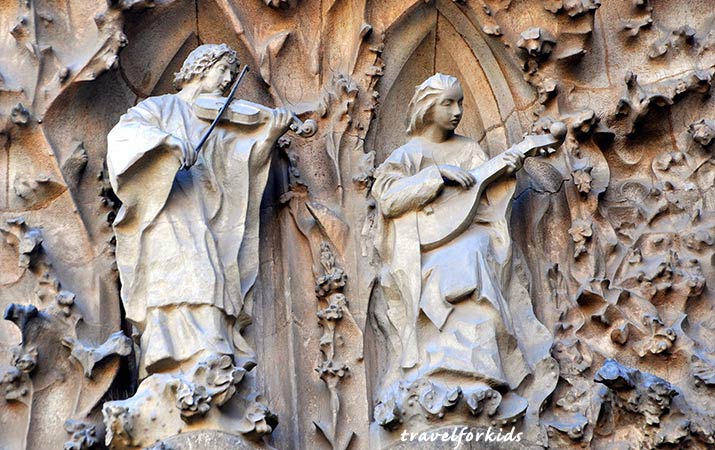 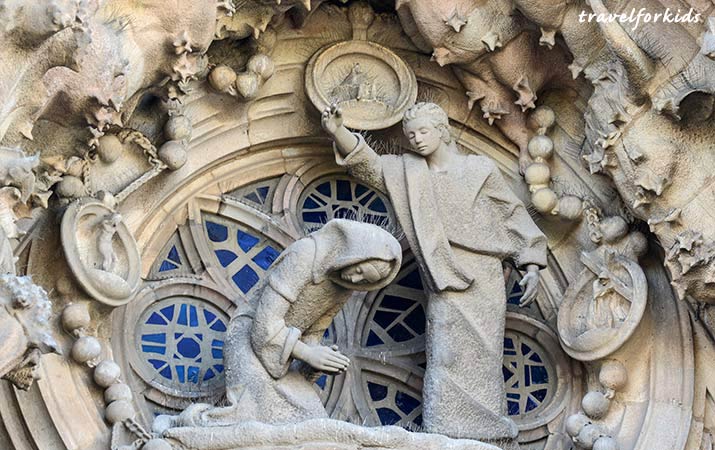 In the Annunciation scene aobe, the Archangel Gabriel gives Mary the news that she will be the mother of Jesus.

At the top of two spiral columns, look for four angels with bronze trumpets.

Plants, flowers, wildlife on the doors 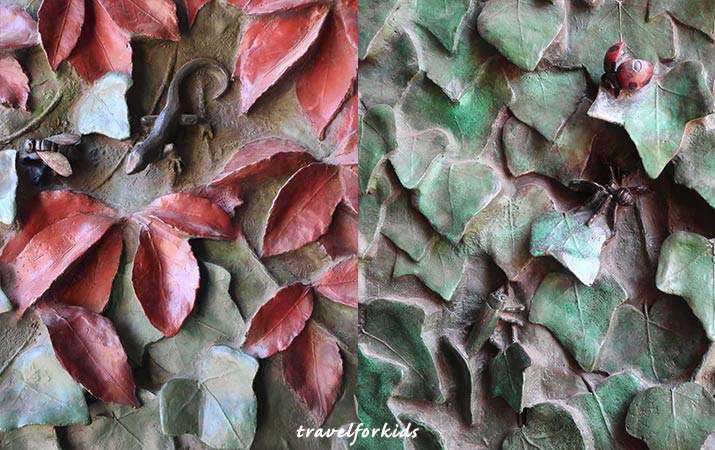 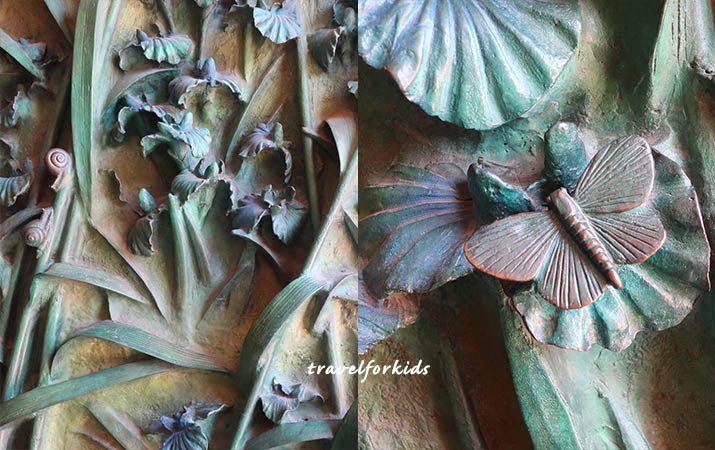 Left door, look for a turtle, frog, butterfly, snails dragonflies (over the doorway). 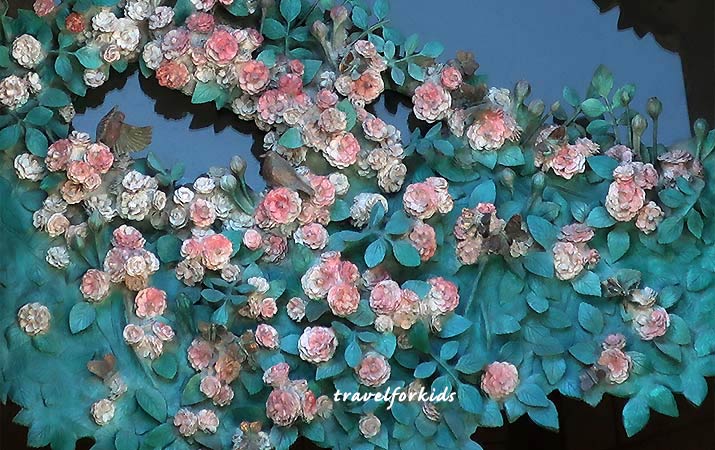 Right door is covered with roses, birds, and butterflies, see if you can find the birds’ nest. 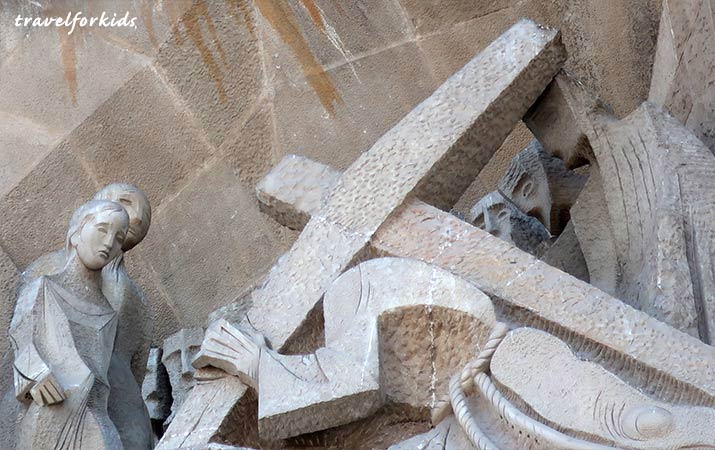 In contrast to the joyous details of the Nativity Facade, the Passion Facade on the opposite side of the basilica portrays somber scenes of Jesus death and resurrection.

Wondering why the Passion Facade looks so different from the Nativity Facade? Contemporary Catalan sculptor Josep Maria Subirachs created this facade, based on a detailed drawing by Gaudi from many years earlier.

The Passion Facade has twelve sculpture groups, starting at the lower left with the Last Supper, following right to the Kiss of Judas, Flagellation on the column, denial of St. Peter, trial of Jesus, carrying the cross and Veronica’s veil, Longinus on horseback, Crucifixion and burial.

Over the facade is triangular pediment with eighteen bones (symbols of death), a lion and lamb at either end, symbols of Jesus. 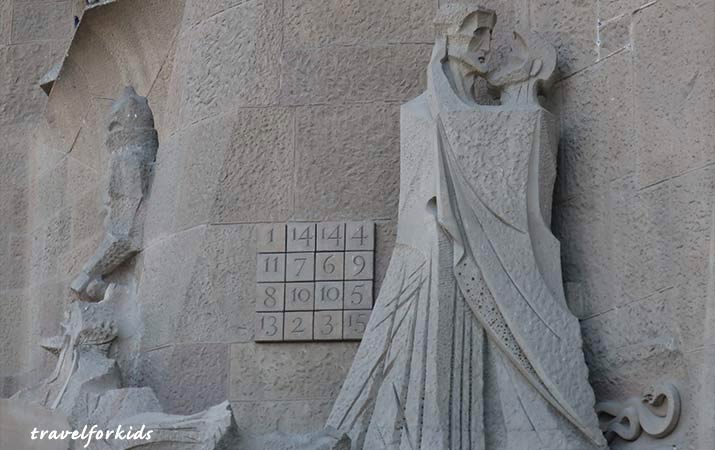 In the Kiss of Judas scene is a magic square. All the numbers in the magic square add up to 33, the age of Jesus at his death.

Above the portal, at the top of the pinnacle is a dove, symbol of the Holy Spirit. Even higher up, on the bridge between two bell towers is Jesus in heaven. (Tip: If you take the elevator up to the Passion Facade tower, the statue of Jesus on the bridge is visible close up.) 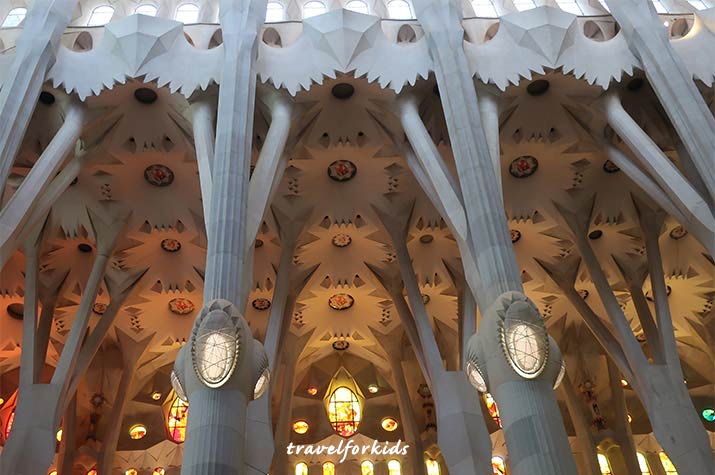 It took more than hundred years to complete Gaudi’s unique creative vision for the columns, windows, and roof, but when you step inside, the basilica is an exceptional light-filled space.

Look closely at the tree-shaped columns. Gaudi not only closely observed tree trunks for his innovative design, but the “branches” of the columns fulfill structural requirements to support the weight of the massive roof high above.

In the center of the nave, the four columns are ornamented with the names and symbols of the four Evangelists: Mateu (Matthew) angel, Luc (Luke) bull, Marc (Mark) lion, Joan (John) eagle.

Holy Family symbolism continues inside the church. A statue of Joseph appears over the door leading to the Nativity Facade, Mary is above the door to the Passion Facade, in the center above the altar is Christ on the cross, under a glowing canopy. On the floor of the transept is a mosaic with the initials of Jesus, Mary and Joseph.

The bronze door to the Glory Facade is inscribed with the Lord’s Prayer in fifty languages, above is a contemporary statue of St. George, patron saint of Catalunya.

Before leaving the basilica, look up at the vaulted ceiling, filled with star shapes over the side naves and sunbursts in the center nave, suffused with natural light.

After visiting the basilica, be sure to walk around the church. 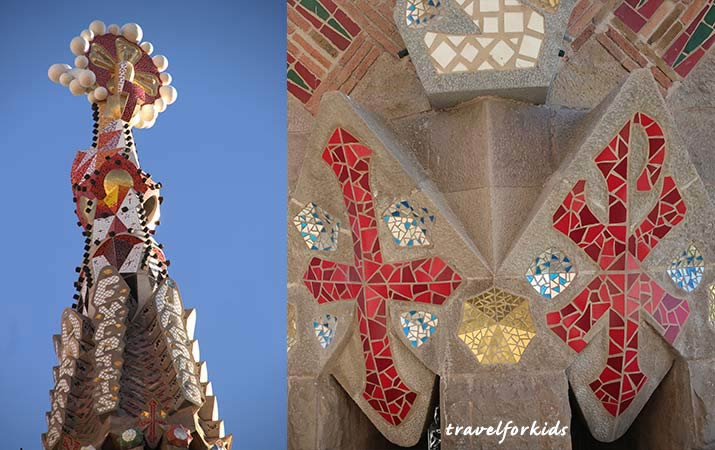 The pinnacles of the eight bell towers are decorated with bright colored ceramic mosaics.

At the top are symbols relating to Catholic bishops, the miter (hat with four sided cross), staff, and ring. Further down the pinnacle is the mosaic initial of each apostle, e.g. T for Thomas, B for Barnabus etc., and prayers – Hosanna and Excelsis. 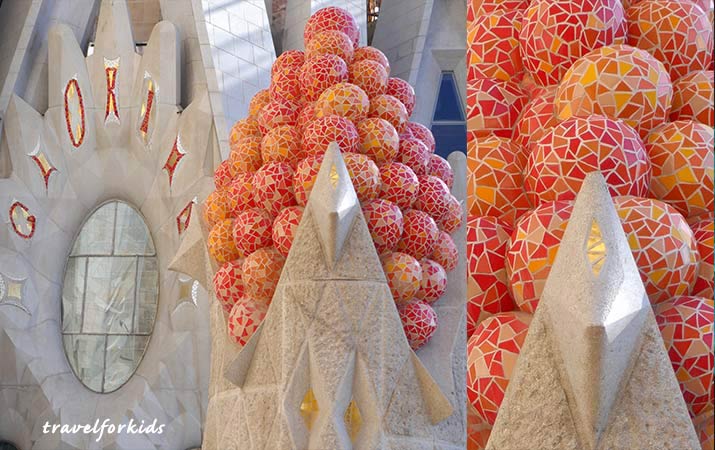 Jewel-like spires over the nave are decorated with colorful mosaic fruits. The fruits represent fruits for each season of the year – peaches, cherries, figs, pomegranates, almonds, oranges, etc. 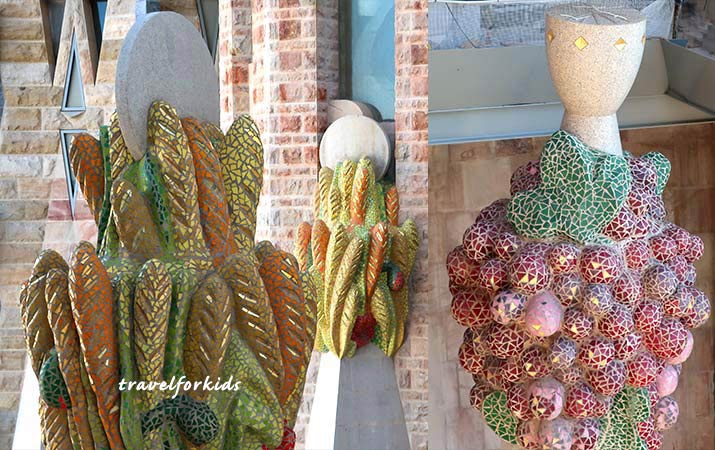 Another line of spires are topped with grapes and chalice, and wheat and wafer – this represents wine and bread of the Eucharist in the Catholic service. 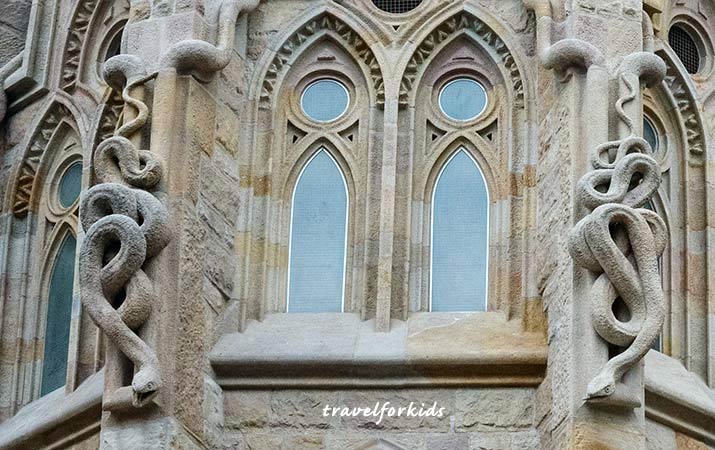 Go around to Carrer de Provenca to look (with binoculars) at the apse, decorated with gargoyles (rain gutters) in the shape of a twirly snakes, chameleons, frogs, snails.

Gaudi modeled the gargoyles on animals that were familiar in Barcelona. (When he started designs for the basilica in the late 19th century, the site was not in the middle in of a busy city as it is today, it was in the middle of a field, surrounded by plants, flowers and small animals. )

Above the gargoyles, topping the round windows are stones carved with the symbols of the Holy Family – Virgin Mary (crown and M), Jesus (J with crown of thorns), Joseph (J with daffodil flowers). 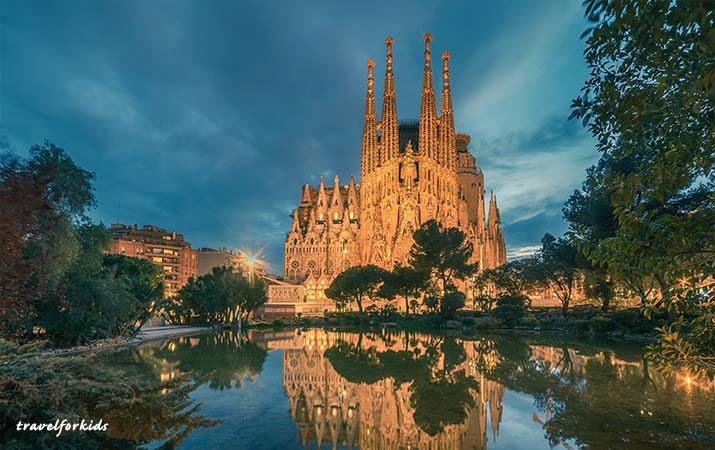 Find more “fun things to do with kids” in Barcelona on Travel for Kids website.