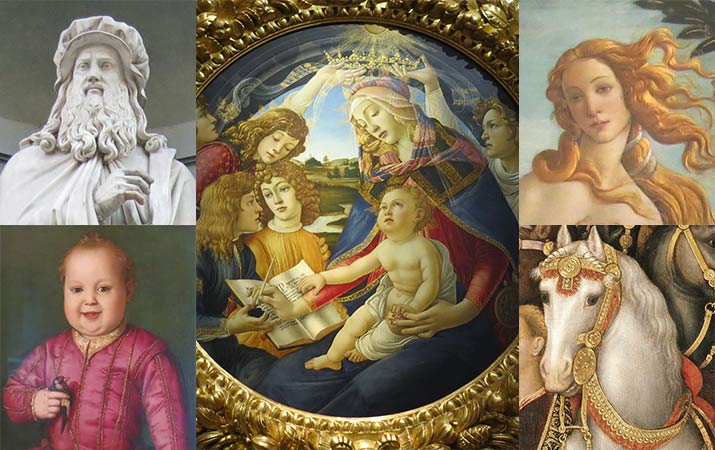 The Uffizi Museum (Galleria degli Uffizi) in Florence has a magnificent collection of Italian painting and sculpture. Compared to “gazillion rooms” Louvre or British Museum, the Uffizi is a more manageable museum experience with kids, enhanced by a helpful museum staff.

Here’s our tips for families visiting the Uffizi, and some favorite artworks to see. 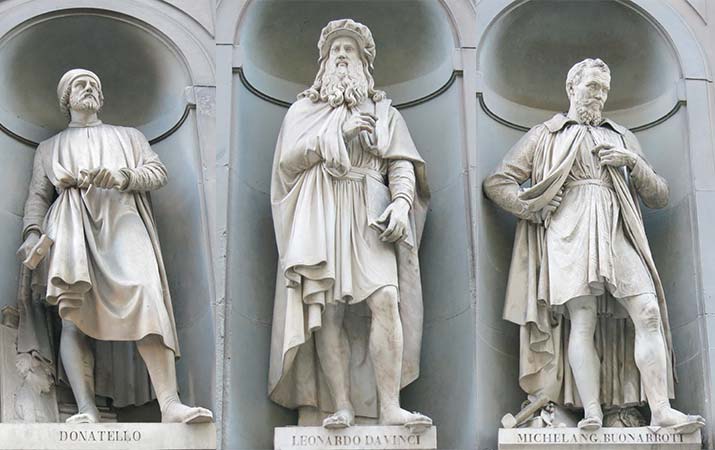 In the courtyard, while waiting to pick up your tickets, check out the statues of famous Italians – Donatello da Vinci, Michelangelo, Dante, Machiavelli, Galileo and more.

Start your visit, by climbing the grand staircase, past two fierce ancient Roman dog statues, to the second floor. 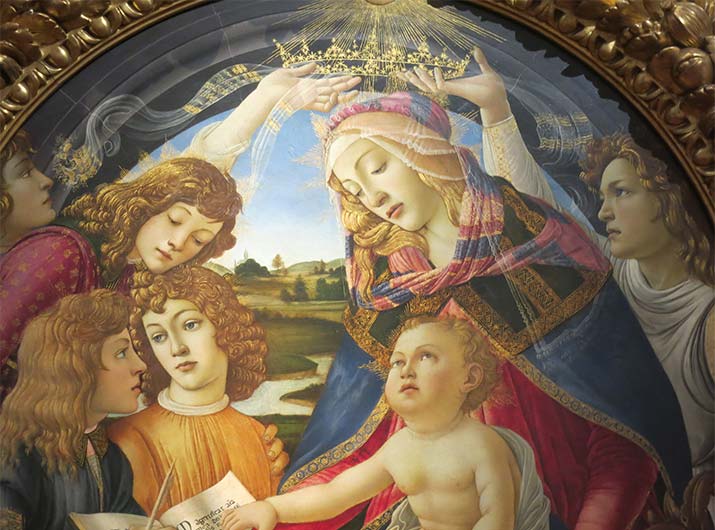 Rooms 10 -14 are devoted to Botticelli, displaying two of his most famous paintings Allegory of Spring (Primavera) and Birth of Venus.

Also don’t miss Madonna of the Pomegranate – an angelic Christ child holding a pomegranate, sitting on Mary’s lap, and Madonna of the Magnificat – Mary crowned by angels (shown above). 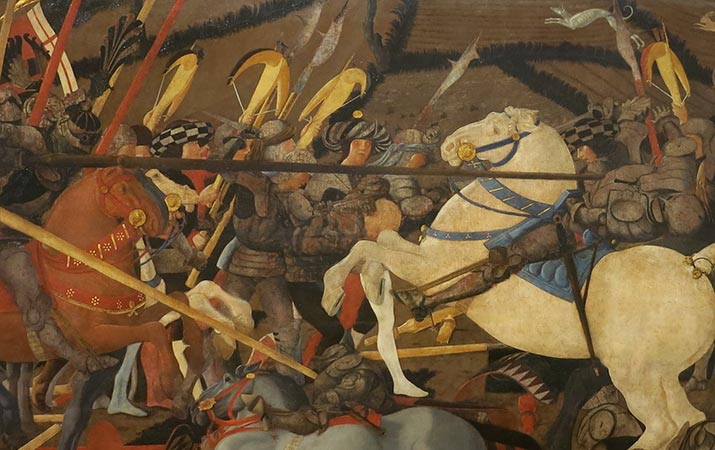 Paolo Uccello painted three different scenes of this victorious battle between Florence and Siena in 1432. It’s quite a free-for-all – armored knights trying to stay on horseback, riders toppled by lances. Room 8

Tip: The other two paintings of the Battle of San Romano by Uccello are in the Louvre in Paris, and National Gallery in London.

Adoration of the Magi paintings 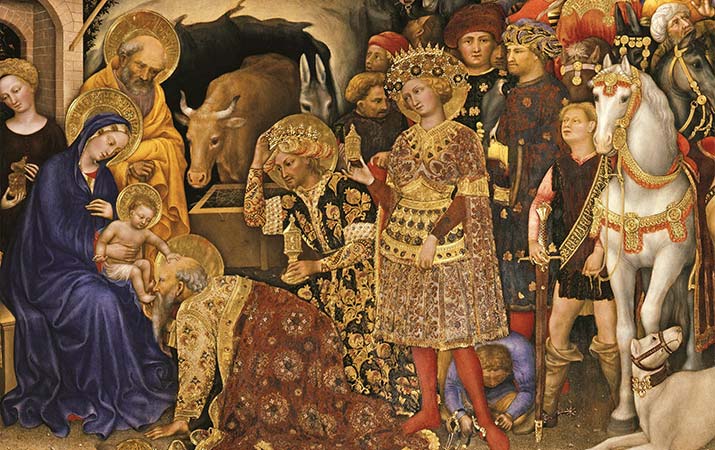 The Florentines commissioned many paintings called “Adoration of the Magi,” scenes of the Three Wise Men in Bethlehem, bringing gifts to the Christ child.

One of the most famous is the Adoration of the Magi by Gentile da Fabriano (above). See if you can spot these animals in the painting – monkeys, cheetah, horses, dogs, ox, donkey, birds. 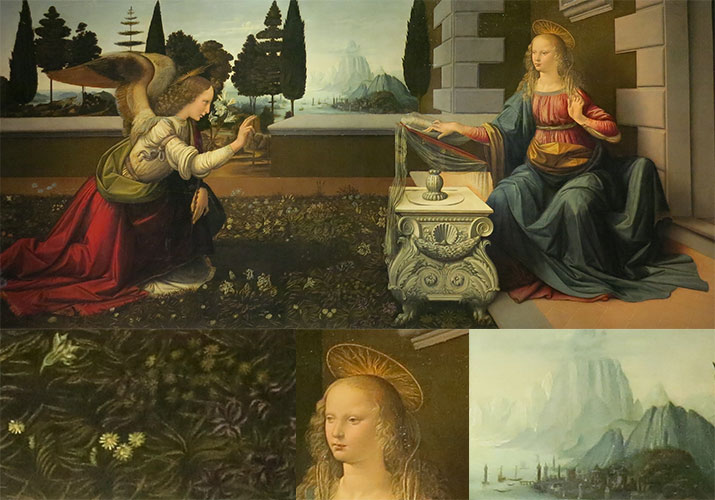 Da Vinci did not complete many paintings, but what there is – it’s extraordinary. The three Leonardo works in the Uffizi were done while he lived in Florence, apprenticed to the artist Verrocchio

His Annunciation, a scene of an angel announcing to Mary she will be the mother of Christ – is sublime. The angel, kneeling in the garden and holding a lily, gracefully extends his hand in greeting. Virgin Mary looks up from her book in surprise.

In the Baptism of Christ, the overall painting is by Verrocchio, but Leonardo painted the glowing angel at the far left.

Adoration of the Magi, though unfinished, is a masterpiece. Look at the baby Jesus reaching out to touch the gift from one of the three kings, and riders on horseback in the background. Of all the Adoration of the Magi paintings, this is like no other. 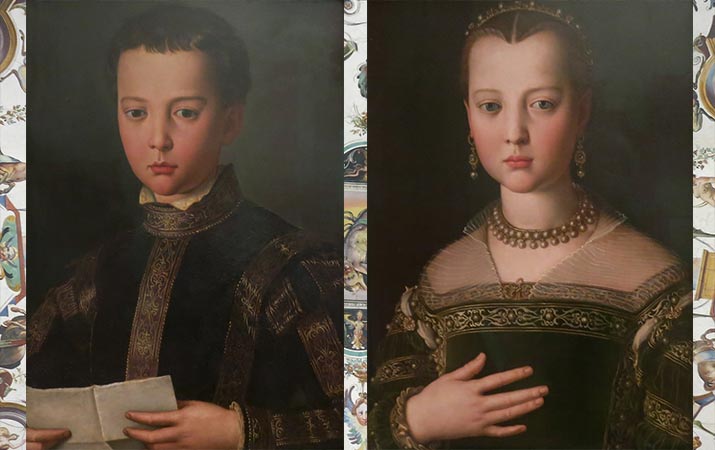 It’s fun to see what kids from a wealthy dynasty looked like in the Renaissance. Medici children portraits were painted by court painter Bronzino – Francesco, Maria (shown above) Giovanni and Bia.

Also look for Grand Duchess Eleonora of Toledo, decked out in shining ropes of pearls and golden belt, her arm around Giovanni’s shoulder, and Grand Duke Cosimo I wearing pointy armor. 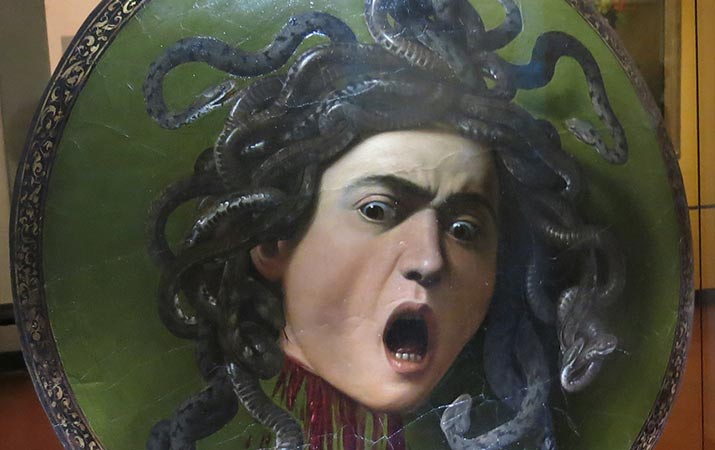 Teens should check out Caravaggio’s Head of Medusa, and dramatic Sacrifice of Isaac, as well as Judith Slaying Holfernes (lady knew how hold a sword) by Artemisia Gentileschi. 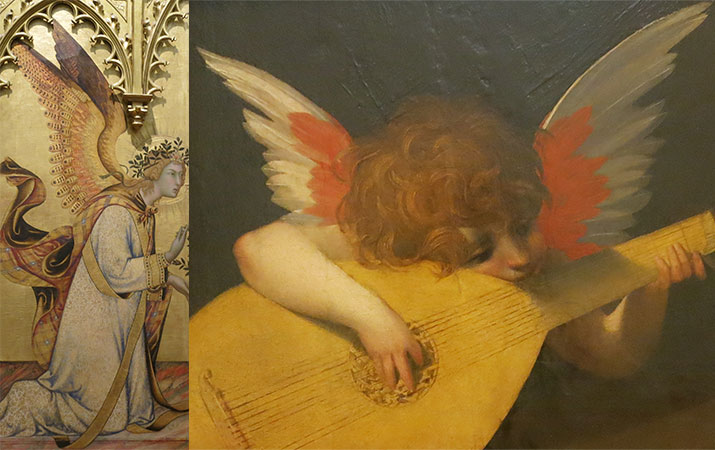 The Uffizi has so many paintings with angels – it’s too many to count.

Some angels have bright multi-colored wings (Coronation of the Virgin, Saints and Angels by Lorenzo Monaco, above) or white feathers and flowers (Annunciation by Botticelli); other angels are adorable chubby cherubs with curly hair – Musical Angel (above). 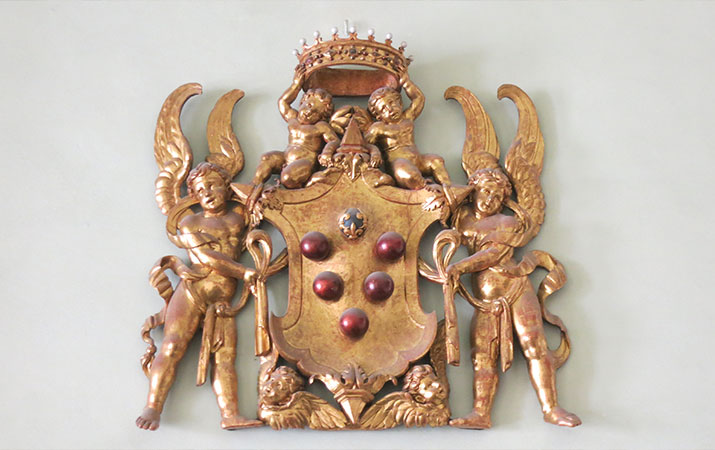 After Medici grand duke Cosimo I assumed control of Florence and moved into the Palazzo Vecchio, he ordered construction of the Uffizi next door, for government and guild offices.

His son Francesco turned the Uffizi into an art gallery, and later generations added more artworks to the Medici collections. In the 18th century, the last Medici bequeathed the museum to the people of Florence.

Look for the Medici coat of arms (red balls) throughout the Uffizi – on wooden doors, gilded decorations, painted ceilings. In addition, find Cosimo I emblems also – turtle and ram.

Tips for enjoying the Uffizi with kids

You’ll want a ticket with a timed entry, and make your reservation well in advance (more than a month before your visit).

Tip: If possible, reserve the first timed entry in the morning, when the museum is less crowded.

The least expensive online reservation is the Musei Firenze website – Uffizi Gallery. (Tip: Page default is Italian, but select English at the bottom of the page)

Go about 15 min. to half an hour before your timed entry to redeem the printed confirmation with actual tickets at the Reservation Ticket Office, west side of the courtyard.

Or, take a private family tour: The Uffizi for Families

Tip: When we visited, some artworks were in different rooms than listed in our guides, and some galleries may be closed.

Ticket is good for one entry only – that is, you can’t go in and out to take a break.

No food, bottles or cans in the museum. There is a cafe for snacks, cold drinks, lunch stuff, and stellar views of the Palazzo Vecchio across the way.

Photos (no flash) are okay, but selfie sticks are not allowed. And please be considerate of others while taking snaps.

Strollers are permitted – there are wide corridors, but rooms do get crowded, especially with large tour groups gathered around a certain painting.

Ask directions – The museum attendants are accessible and speak English. Looking for a specific artist, just ask directions. In our experience, they were cheery and helpful.