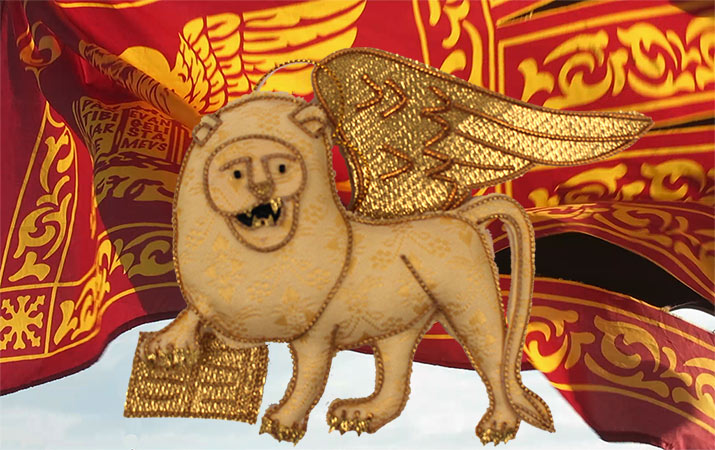 The winged lion of Saint Mark is the symbol of Venice. In the 9th century, Saint Mark became the patron saint of the city, the lion a guardian of peace and power. In its paws, the lion holds a book, sometimes a book and a sword.

Over centuries of the Most Serene Republic of Venice, in dazzling ceremonies the Doge’s Golden Boat shone with lions, on the bow of Venetian war galleys, lions sailed over the water. The lion is emblazoned on the red and gold flag of Venice. 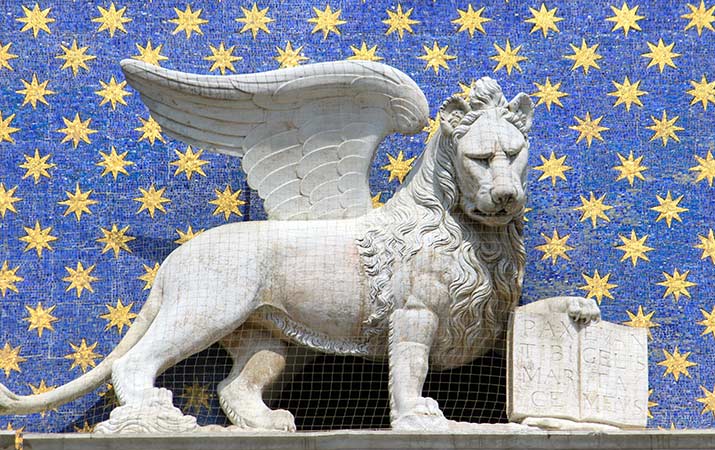 In early Christian art, the four Evangelists are represented as a divine animal or angel; Saint Mark is the winged lion.

Saint Mark was martyred in Alexandria, and buried in a safe place by Christian followers in the 1st century AD. How did the saint, who died in Egypt, come be buried in Venice?

The Venetian lion of St. Mark holds a book in its paws. The book is inscribed with Latin words “Pax tibi, Marce, evangelista meus” – “Peace to you, Mark, my evangelist. Here, your body shall rest.” 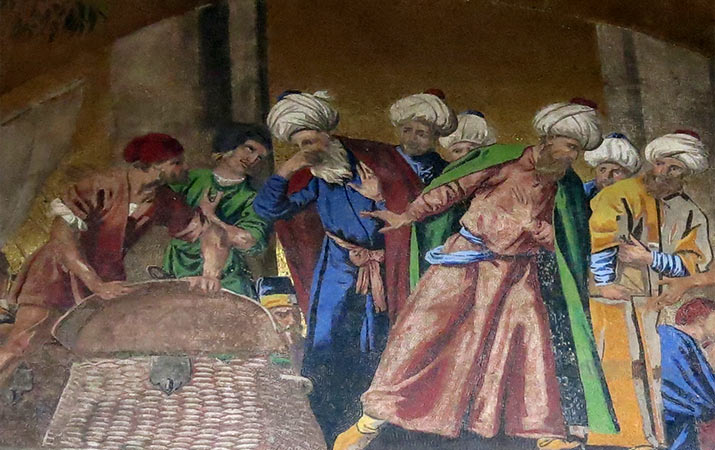 In 827, two Venetian merchants voyaged to Egypt, opened the saint’s tomb and stole the body of St. Mark. They hid it in a basket, sailing back to Venice with the sacred relic.

Stealing the relics of Saint Mark, the Venetians followed a prophecy concerning the saint. During his missionary work, Saint Mark came to the Venetian lagoon but was stranded on one of the islands. A divine messenger appeared, and reassured Mark that one day his body would rest in Venice.

On the west facade of St. Mark’s Basilica, four mosaics portray the story of how St. Mark came to Venice. From right to left the mosaics are – Removal of the body of St. Mark in Alexandria, Arrival of St. Mark in Venice, The Doge and people receive the remains of St. Mark, St. Mark is carried in procession into the basilica.

Inside the basilica, next to the Pala d’Oro altarpiece is the sarcophagus of St. Mark.

Lion of St. Mark in battle 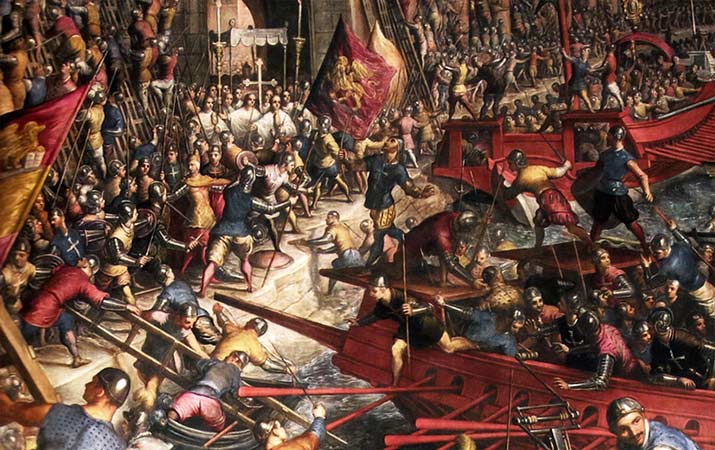 Going to war in the Middle Ages, Venice carried a red and gold flag with the lion of St. Mark, a huge banner easily identifiable in naval battles, and rallying cry for land battles. Venetian war galleys were ornamented with golden lions – Saint Mark would help them in battle.

In 1000, Doge Pietro Orseolo II sailed out of the lagoon to conquer cities on the Dalmatian coast. It’s probable the red banner with lion of St. Mark flew on the Doge’s ship for the first time. The expedition was successful, and thereafter, on May 9th the Venetians celebrated a ceremony of thanksgiving.

On the Fourth Crusade, Venetians sailed with a fleet of ships to take Constantinople. In 1203, just as the siege was going badly, the blind 90 year old Doge, Enrico Dandolo, holding the red and gold flag, stepped to the front of his ship, and ordered the ship to ram the shore. The Doge leaped on land, put the banner in the ground, Venetian warriors followed his lead, and the battle was won.

Tip: In the Doge’s Palace, this scene is dramatized by Tintoretto The Fall of Constantinople, shown above.

As Venice expanded its maritime empire around the Mediterranean and in Italy, the flag flew above the castles, winged lions were carved on stone fortresses in conquered cities. On the island of Crete and in the city of Bergamo, look for the lion of St. Mark today.

Kids will have fun in Venice counting all the lions of St. Mark, lion heads (too many to count), lions ready to roar, worried lions, lions with sharp teeth, majestic lions with responsibilities, a lion even sleeps with a book under its paw. Look up, look down, step into a church, cross a bridge, go into a cafe, look into shop windows, you’ll find lions. 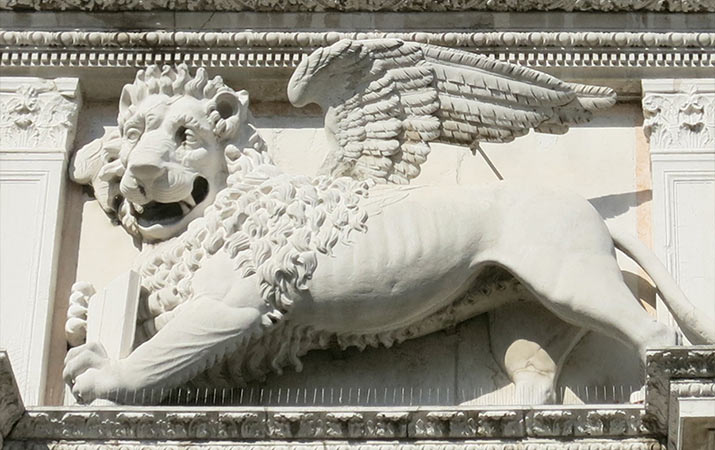 In the Arsensale, a huge fortified shipyard, the Venetians made war galleys and stockpiled weaponry.

Above the main gate, notice the winged lion – the book (and its message of peace) is closed, the lion is showing its teeth. On the stairway, lion heads seem ready to roar. Definitely lions of war.

The four big lions in front of the entrance are ancient, Venetian loot taken from Greece. The two youthful lions on the right are probably 6th century BC, from the Lion Terrace at Delos. Two lions on either side of the stairs are more than 2000 years old. If the lion on the left looks a bit worn, it should be – in the 11th century, Scandinavians carved runes on the statue. 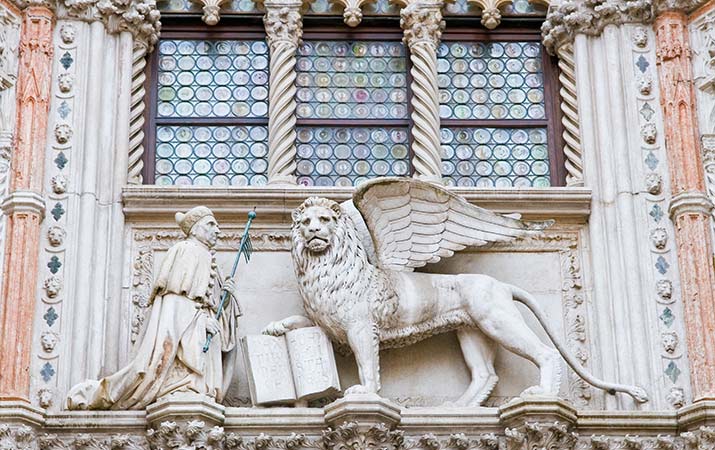 Doge’s Palace (Palazzo Ducale) was the duke’s residence and chambers of the Venetian government. A symbol of power, the lion is everywhere in the palace, too many to count, especially on the palace exterior!

On the loggia level, each of the quatrefoil decorations has a lion head underneath. On the Porta della Carta, Doge Franceso Foscari kneels in front of the lion of St. Mark, outlining the arch and doorway is a line of lion heads (65 or more).

In the courtyard, look for lion heads on the underside of arches, on the bronze wellhead in the center, and winged lion on the east wall.

In the Armoury, lions adorn red and gold shields and helmets. 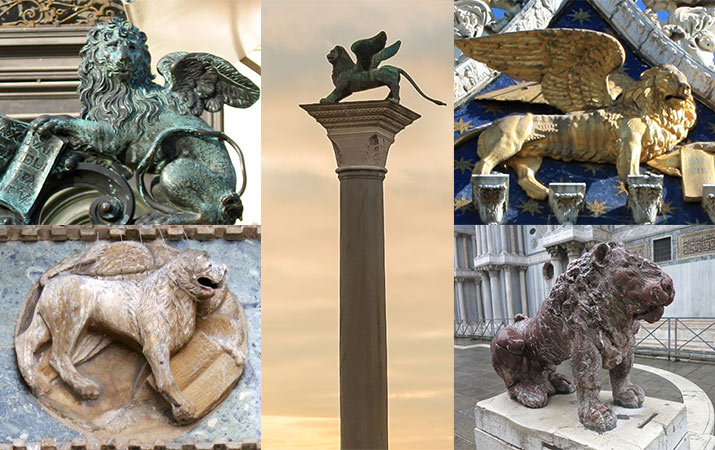 Piazza San Marco (and Piazzetta) is lion central – lions on the clock tower, reliefs on the facade of St. Mark’s Basilica, bronze monuments, and more.

In the Piazzetta, perched on the eastern column is an ancient winged lion, looking out over the Basin of St. Mark. (The western column has a statue of St. Theodore and the dragon.)

On the exterior of St. Mark’s Basilica, on the west facade, over the far left portal are reliefs of the four Evangelists, the lion of St. Mark is second from left. At the very top of the basilica west facade, look up to a statue of St. Mark, and under him a golden lion on a field of blue and gold stars.

Before going up the Campanile, stop to rub the bronze lion at the base of the bell tower. Kids can climb all over the red marble lion in the small square next to the north facade of St. Mark’s Basilica. 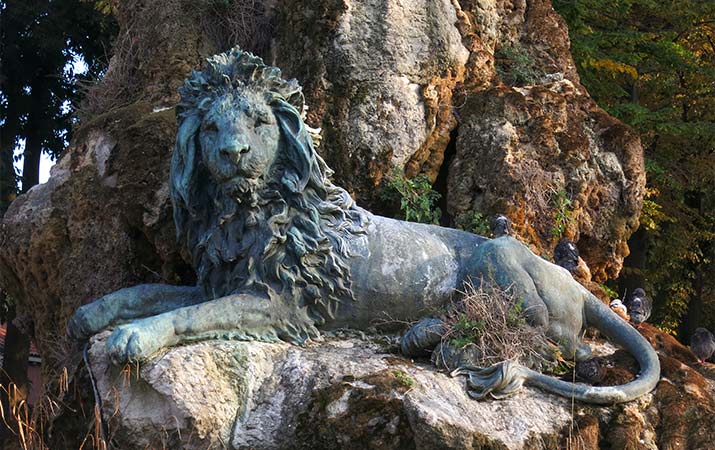 Last of all, one of our favorite lions, a bronze statue on Viale Garibaldi, near the Giardini Pubblici. Like the long history of Venice, this lion has many stories to tell.