The Boston Tea Party is a famous event in the American Revolution. On the night of December 16, 1773, as a protest against British taxes and tea monopoly, a group of 100+ patriots tossed tons of tea into the harbor.

In Boston, at the Boston Tea Party Ships & Museum, kids will step aboard a replica ship, toss tea chests into the water, and see enactments by live actors of dramatic events. On display is also an original tea chest – over 200 years old. 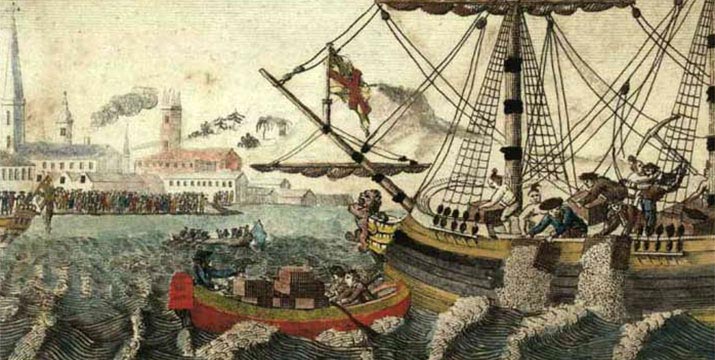 By December 1773, three ships from England, the Beaver, Eleanor and Dartmouth, were docked in Boston harbor.

Each ship carried a cargo of 114 tea chests, each weighing about 400 pounds, packed with different kinds of tea from China.

The American colonists refused to pay tax on the tea, and requested the British governor send one of the ships back to England, without unloading the valuable tea cargo.

On the night of December 16, 1773, thousands of people gathered in the Old South Meeting House to hear the governor’s response. Meanwhile, following a secret plan, 100+ men disguised themselves with old blankets, covered with their faces with soot, and assembled at Griffin’s Wharf.

In the Old South Meeting House, when news arrived the governor ordered the tea unloaded the next day, Sam Adams announced “This meeting can do nothing more to save the country.”

This was a signal for the patriots to board the British ships, and destroy all the tea. The colonists hoisted up heavy tea chests onto the deck, broke them open, and tossed the tea into the water. They worked quickly and efficiently, and in less than three hours, the harbor was “a large cup of tea for the fishes.”

When the patriots were finished, they returned to the wharf, and walked away into the night, accompanied by the tune of “Yankee Doodle.”

The next day, the colonists were delighted, but the British were very angry (tea cargo was worth about two million dollars today). And Boston was punished – the harbor was closed to all trade, and warships with soldiers arrived from England.

Boston encountered the worst treatment by the British, but as a result, the thirteen colonies unified and started down the road to revolution.

Identities of the patriots at the Boston Tea Party were secret for years, as this was an act of treason. In later years, some patriots revealed their names, Paul Revere was certainly present.

It’s fun to read the participant’s list with ages and occupations – the youngest were teenagers, one sailor was 41 in 1773, but lived to age 97. 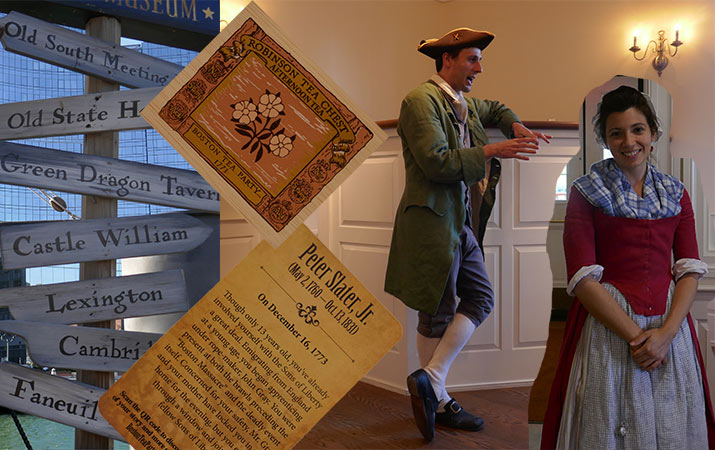 The tour of the Boston Tea Party Ships and Museum is a first hand experience.

When the tour gathers in a meeting house, live actors set the scene and everyone is given a card with information about one Tea Party participant (it’s fun to read the details, e.g. a teenager escapes out of his room to rush down to the harbor).

Next, step off the dock onto the Eleanor, a full-size replica ship, go below deck to see where tea chests were stored, and the crew’s and captain’s quarters. Kids can toss boxes of tea into the water (and haul them back up, to toss them overboard again).

Back on the wharf, listen to more stories about the Boston Tea Party, and kids can hoist up weighty tea chests with block and tackle.

Inside the museum are hologram scenes of what happened after the Boston Tea Party (loyalists vs. patriots), George III talking to Sam Adams, a movie of Lexington and Concord, and display of an original tea chest, owned by the Robinson family. Tip: The box is painted with flowers, because at one time the chest was used to store dolls.

The tour ends in Abigail’s Tea Room, where you can sample five of the teas carried on the ships, lemonade, cider, plus scones, muffins, and cookies.

Tip: The tour take bit more than 1 hour, and is best with kids who are old enough to have some idea of the American Revolution. 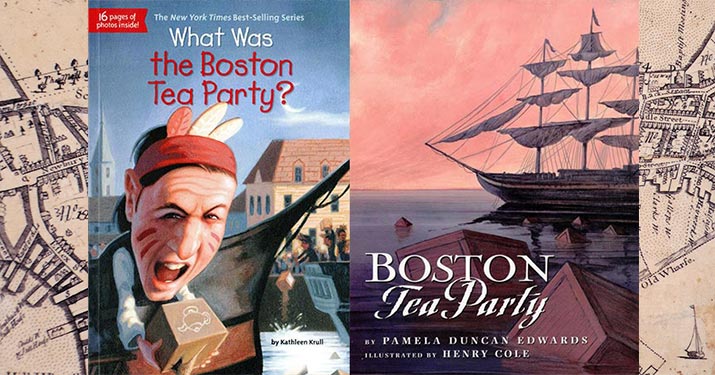 Children’s books to read about the Boston Tea Party:

Tip: Planning a visit to Boston, you’ll need a fun place to stay. Check out our Travel for Kids selected list of Boston family hotels.