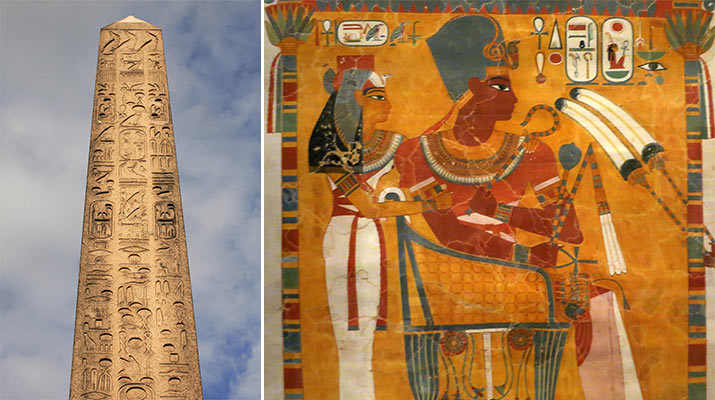 The oldest monument in New York City is more than 3,500 years old – it’s an ancient Egyptian obelisk called Cleopatra’s Needle in Central Park. And what about tomb paintings, such as this one of pharaoh Amenhotep III, with his mother standing right next to him?

For a treasure trove of ancient Egyptian goodies, head to the Egyptian Art galleries in the Metropolitan Museum of Art. Here’s some of our favorites: 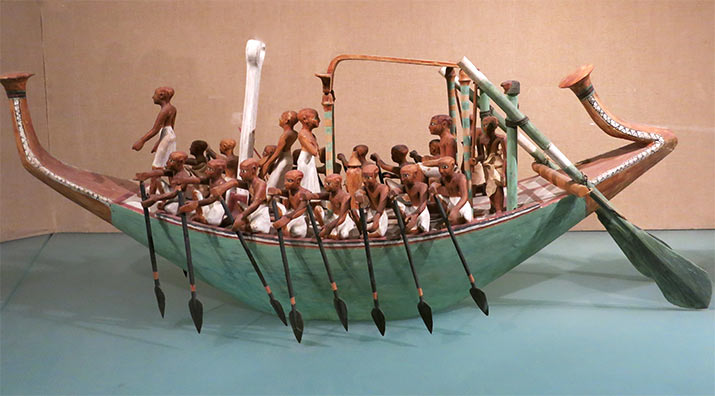 Models from the tomb of Meketre are a wonderful glimpse into life in ancient Egypt. It’s so tangible to see a model boat, made 4,000 years ago from wood, paint, plaster and twine. The boat is pushed off from the shore by one guy with a long pole, sails are raised, they’re sailing on the Nile (just like we sailed in a felucca many centuries years later). 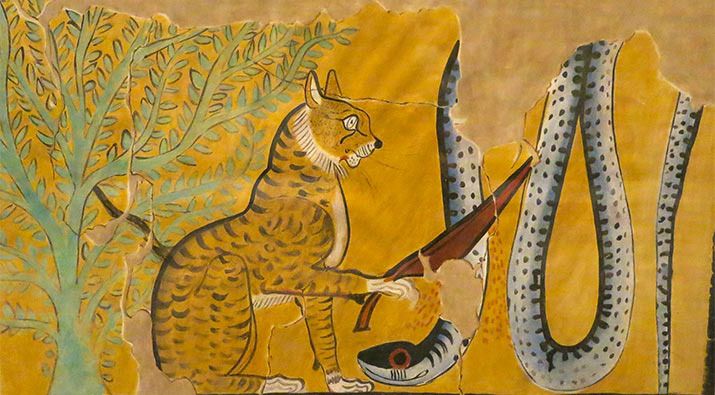 Kids will have fun looking for cats in the Egyptian Art galleries. Here’s a tomb painting (exact copy) of a cat and swirly serpent – the serpent looks very confident, but the uncertain-looking cat is about to whomp the snake.

Editor’s note: We returned from our trip to Egypt with a whole collection of souvenir cats. At every occasion, we couldn’t resist buying yet another stone cat from very youthful vendors (especially on top of the trail above the Valley of the Kings).

In the Sackler Wing, check out the Temple of Dendur, built in 10 BC near Aswan. Built in the Roman period by Caesar Augustus, this temple honors the Egyptian goddess Isis, along with reliefs of Osiris and Horus.

After seeing the museum, head outside to Central Park, to see Cleopatra’s Needle, a 69ft high obelisk. To get there, walk around west from the Metropolitan Museum, cross East Dr., go on the path. Here’s a map that shows the location of obelisk. 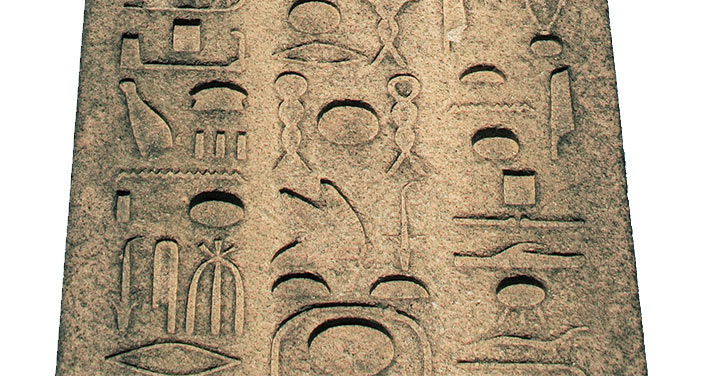 The granite obelisk was set up by Thutmose III in Heliopolis around 1500 BC to honor the sun god Ra. Pharoah Ramses II later re-inscribed more hieroglyphs on the obelisk. In 12 BC, Caesar Augustus moved it to Alexandria (bit of a challenge, as the obelisk weighs 220 pounds). Centuries later, a gift from Egyptian government, the obelisk arrived here at Central Park in 1880.

The name of the obelisk is misleading, as there is no association with Cleopatra, who lived centuries after the obelisk was made.

The obelisk has been recently cleaned, so it’s easier to see the hieroglyphs. What’s very cool for kids is the four crabs at the base of the obelisk – they look like they’re trying to crawl out from under the huge granite stone. The crabs are functional. When Romans set up the obelisk in Alexandria, the corners were bit broken, so four bronze crabs were added for stability.

Wondering how the bronze crabs look so well-preserved, it’s because they are replicas of the Roman crabs, made when the obelisk was set up here in New York. (See two of the original crabs in Gallery 131 inside the museum.)

In addition, there’s another pair of obelisks you’ll want to see on your travels (we’ve seen all four). One obelisk (topped with gold) is in the Place de Concorde in Paris, the other stands in front of the Luxor Temple in Egypt.