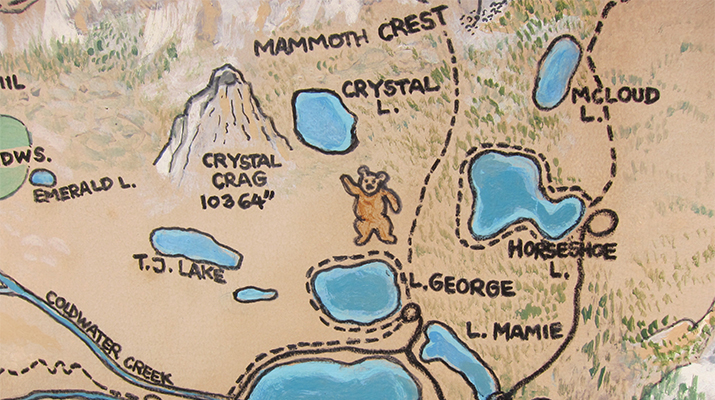 California has some of the most glorious natural scenery, not only majestic Yosemite National Park, Lake Tahoe, Big Sur and Point Reyes, but also golden hills dotted with oak trees (Napa and Sonoma Valleys), deserts with cactus and knobby Joshua trees (California deserts), and alpine meadows covered with shooting stars and buttercups, places where there are no roads, only trails through the landscape.

Hiking with kids at any age is a wonderful experience.

Stick your infant in a baby backpack (ditch the stroller), and you can hike as far as you like. With toddlers, savor the experience of stopping to look at every little thing along the way.

The distance may be short, but the joy of tiny discoveries is immeasurable.

Watch curly oak leaves floating in the creek, red ants digging holes on the trail, bees buzzing in a hive stuck on a massive sandstone cliff. Climb in the branches of a live oak tree along the way or spend time playing in a stream.

With older kids, you can cover more territory, hike longer distances to reach a high mountain lake, scramble over rocks in the desert or follow a chalky trail to reach the beach far below.

And before you know it, your kids will be taking the lead, speeding up the trail ahead, leaving slowpoke adults in the dust.

Hiking in California is something we’ve done with our kids since they were infants. One summer when the boys were 3 and 5, we spent several weeks in Reds Meadow, in the Eastern Sierra.

In Reds Meadow Valley, we could hike to a meadow or bubbling spring, then take the shuttle bus back (a free shuttle bus goes down the valley). Other hikes were off the shuttle bus route, but took us to spectacular sights, such as Rainbow Falls.

A most ambitious hike was up the Red Cones, 6 miles round trip, 1,000 ft. gain in elevation.

Our 3 year old was my special hiking partner. I walked hand in hand with him. When he was tired, we rested, but I’d say, “Let’s stop up the trail at that shady spot under that tree,” or “Can you make it to the top of this little hill?”

We had lots of snacks and drinks of water along the way. And before he realized it, we were at the top of the Red Cones.

Some kids are natural hikers, others may ease into it more slowly.

Start easy, but keep at it. With a little effort, the rewards are so satisfying – wade in a river at the bottom of a magnificent waterfall, look out over the panorama of a golden valley below, or climb to a mountain pass, where views in any direction go on, as far as the eye can see. 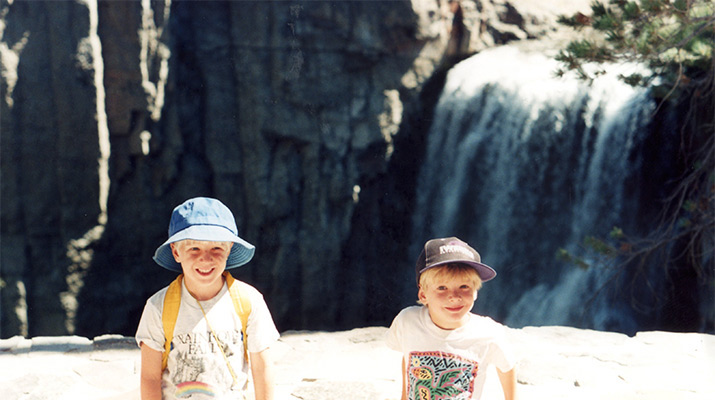 Our boys at Rainbow Falls, near Mammoth Lakes in the High Sierra.

Also find so many more fun things to do, when you go traveling with kids in 45+ countries worldwide: Travel for Kids