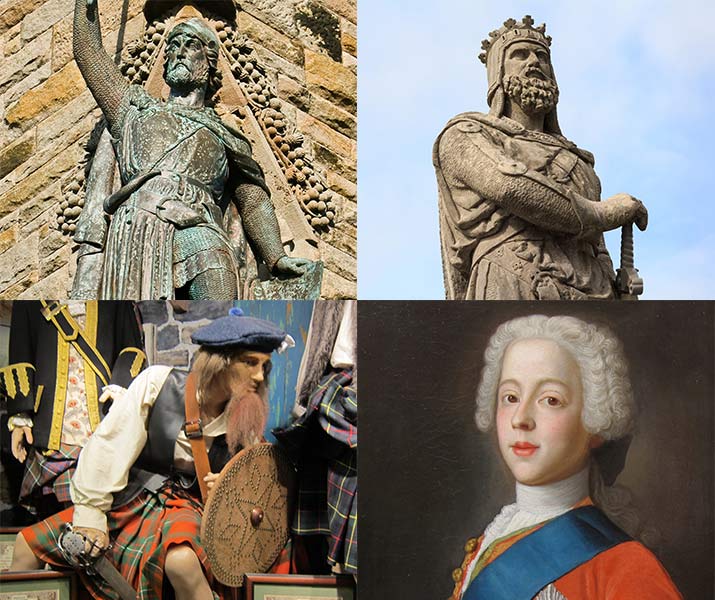 Before walking through the gate to majestic Edinburgh Castle, take a look at the statues on either side. On the right (looking very stern) is William Wallace, on the left is Robert the Bruce.

William Wallace, leading the Scottish army, thwacked the English army at the Battle of Stirling Bridge in 1297.

Robert the Bruce, not only fought the English and won at the Battle of Bannockburn, but in 1306 became King of Scots. Inside the castle, in The Honours of Scotland gallery, check out the full-size diorama of Robert the Bruce, crowned with a circlet of gold.

Bonnie Prince Charlie, trying to regain the Scottish throne in 1745, did occupy Edinburgh (but never conquered Edinburgh Castle). He stayed in style in the Palace of Holyrood House, sleeping in a comfy bed, and attending parties and balls. You’ll also see his portrait (Charles Edward Stuart), wearing a white curled wig, in the National Portrait Gallery.

On the Royal Mile, at the Tartan Weaving Mill and Exhibition are dioramas of Scottish clan heroes, including Rob Roy MacGregor, the “Scottish Robin Hood.”

This is the site of two great battles in Scottish History – Stirling Bridge and Bannockburn, and Stirling Castle was the prize.

In the Battle of Stirling Bridge, William Wallace had a small army, but he tricked the English knights, divided the army and clobbered them. At the Wallace Monument, check out William Wallace’s broadsword, and stained glass windows of other Scottish medieval warriors and heroes.

In 1314, the English organized a whomping big army to fight Robert the Bruce, with another showdown at Stirling Castle. Bruce maneuvered the English knights to get stuck in the mud at Bannockburn, and using an innovative formation of Scottish knights with spears and pikes (“hedgehogs”), sent the English packing. The Battle of Bannockburn Visitor Centre has a super 3-D multimedia recreation of the battle.

Bonnie Prince Charlie seemed to be on a winning streak in his fight with English, but at Culloden, east of Inverness, Charlie’s Highland army lost big time on April 16, 1746. Visit Culloden Battlefield Visitor Centre with multimedia exhibitions to bring the battle alive.

After Culloden, Bonnie Prince Charlie went into hiding, escaping into the Highlands. He was aided by Highlanders, including Flora MacDonald, who smuggled him onto the Isle of Skye. See a charming portrait of Flora MacDonald wearing a tartan dress with white bows at the National Portrait Gallery in Edinburgh.

The West Highland Museum in Fort William has Charlie memorabilia – a secret painting of the prince, his clothing, and lock of hair.

The mountains and valleys around Loch Lomond are Rob Roy MacGregor country. The area is filled with legends of this 18th century folk hero, who may have stolen cattle, but he also defied a powerful duke, always managed to escape, and gave his ill-gotten gains to the poor.

Biographies of our Scottish heroes, this is a fun book series we found on our trip in Scotland. Illustrated chapter books with details of battles, wins and defeats, high adventure, good for older kids (especially boys): 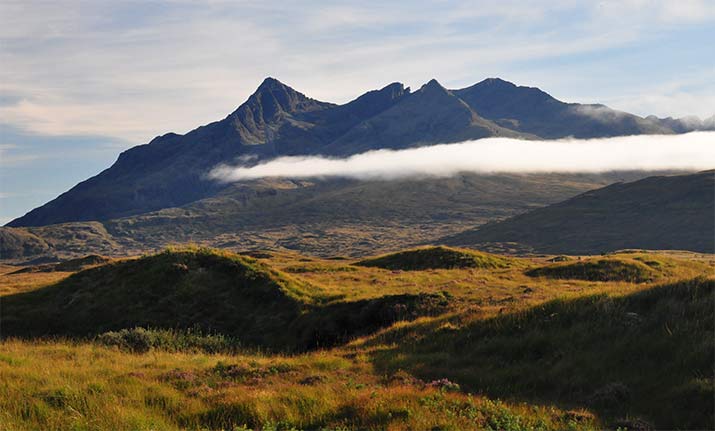