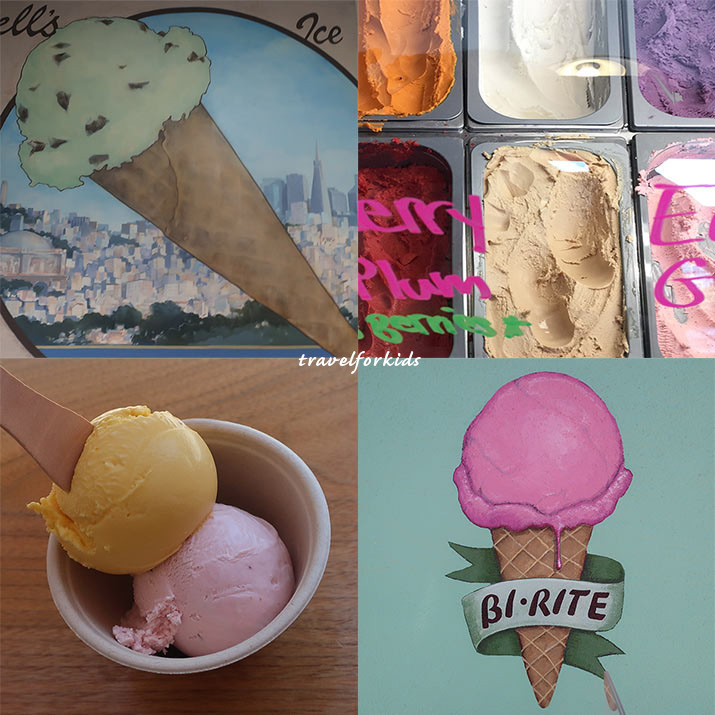 What flavor is that purple ice cream? Ube is a purple yam from Asia, perfect in ice cream.

Why is ice cream green? Some ingredients are matcha (green tea), avocado, mint, or pandan leaf.

Hmmm, why is this strawberry sorbetto is so red? Sorbetto has no cream or milk, so fruit color stands out.

Ice cream is a taste of the world. And so delicious it is.

Cacao beans, originally from a tree growing wild in South America, were used by ancient Maya and Aztec to make chocolate drinks. The Spanish imported vanilla and cacao beans to Europe in the late 1500’s.

By early 17th century, Italians made iced frozen desserts, sorbettos, with strawberries and lemons. When they added sweetened custards with cream and eggs, this was now gelato, ice cream.

The popularity of ice cream spread throughout the 18th century, arriving in the United States too. Thomas Jefferson wrote down his recipe for vanilla ice cream, and served ice cream in the White House. By 1799, eating ice cream on July 4, Independence Day, became a tradition. 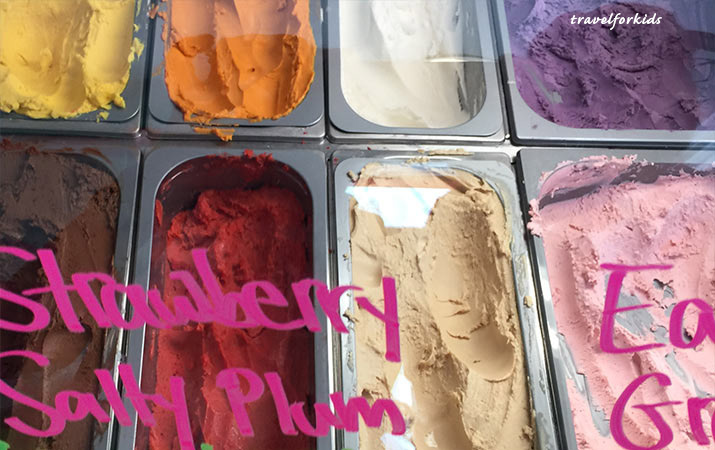 The Mission District has plenty of ice cream shops, and is easily accessible with public transportation, take the J Church tram.

The location of this ice cream shop is ideal, it’s one block from Mission Dolores Park. Enjoy ice cream outdoors on the grass, no worry about dripping ice cream.

Along with scoops of ice cream, on the menu are sundaes, fruit flavor ice pops, chocolate covered ice cream bars, ice cream sandwiches, and a donut with soft-serve ice cream inside.

Mitchell’s is a family-run business, at this location since 1953, and it’s as popular as ever.

Mitchell’s is on the southern edge of the Mission District. Take the J Church tram, walk two blocks down 29th St. to San Jose Ave. 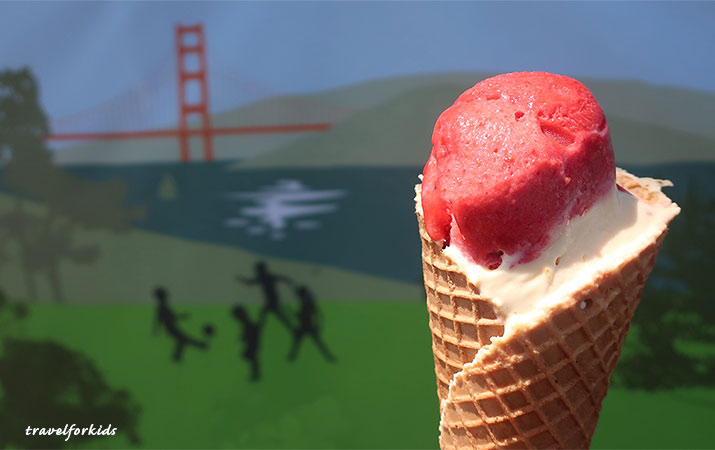 This neighborhood is also called “Little Italy.” Starting in the Gold Rush, Italian immigrants came to San Francisco, bringing with them their food, and ice cream – gelato.

Sorbetto is non-dairy, typically made with luscious fresh fruits, such as strawberry, lemon, apricot, raspberry, orange. 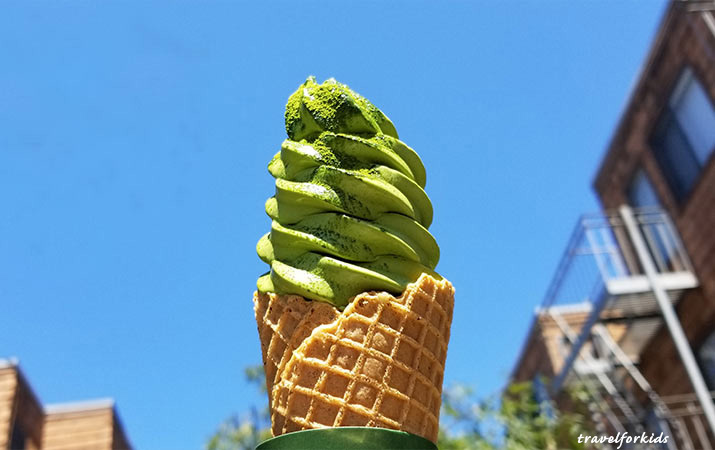 During the Gold Rush, Japanese immigrants came to San Francisco. They settled in the city, established their businesses, and re-built after the 1906 earthquake in the neighborhood that is now Japantown (Nihonmachi).

Soft-serve ice cream with Tofu, Matcha (green tea), Sesame flavors, in a Taiyaki cone (shaped like a fish) or regular cone, toppings such as red bean or sprinkles. 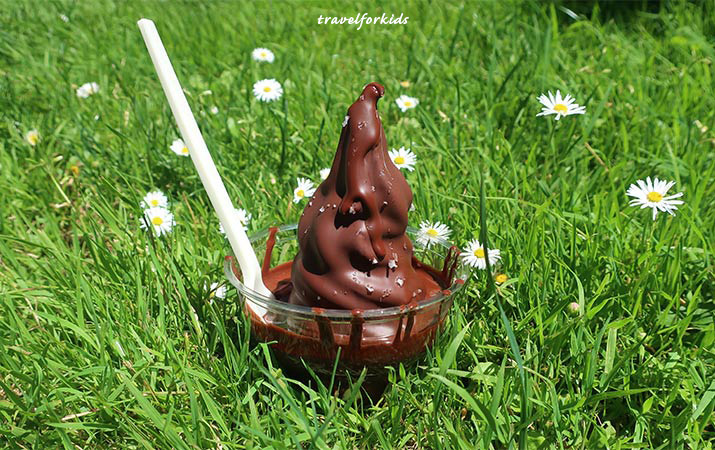 Shop is located one block from Golden Gate Park, on 9th Ave.

In 1849, Domenico Ghirardelli came from Italy, and set up a chocolate business and “confectionary” store in San Francisco. After making chocolates for decades, Ghirardelli opened up an ice cream shop, like the old- fashioned ice cream parlors in the Gold Country.

Tip: Inside the ice cream shop, it’s fun to watch machines mixing chocolate, going round and round. 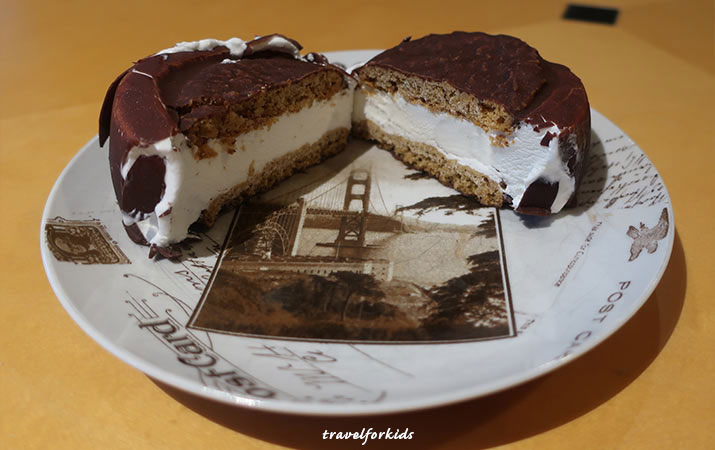 Playland at the Beach was a popular amusement park at Ocean Beach, on the western end of Golden Gate Park.

In 1928, an ice cream stand offered a new treat – ice cream sandwich, with two oatmeal cookies dipped in chocolate, scoop of vanilla ice cream in the middle. It was so delicious, people said “This is IT.”

The amusement park has closed, but IT’S-IT ice cream sandwiches are still made in the Bay Area, and enjoyed by generations of kids, parents and grandparents.

Target at the Metreon (789 Mission St) is right next to Yerba Buena Gardens, perfect spot to take your ice cream sandwiches.

Tip: Find out more fun things to do with kids in San Francisco on Travel for Kids, and check out our list of fun places to stay: San Francisco family hotels.