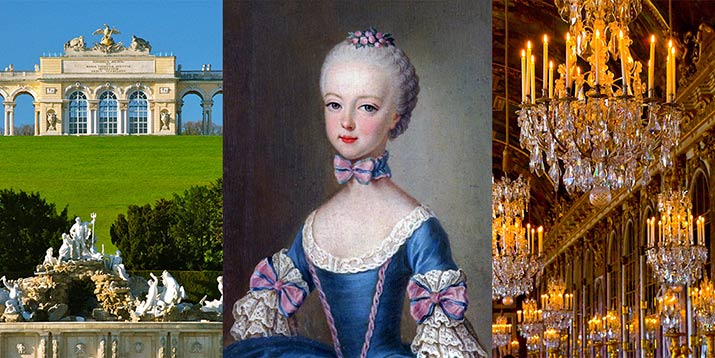 Marie Antoinette was a symbol of the monarchy of France, but she wasn’t French.

Born Maria Antonia, she was Austrian, and grew up in Vienna at the Habsburg court. Her favorite palaces were Schoenbrunn, summer palace outside Vienna, the Petit Trianon and Hamlet at Versailles.

Maria Antonia Josepha Johanna was the twelfth child of Empress Maria Theresa. The royal court (including Antonia and her numerous siblings, tutors, governesses, servants) spent fall and winter months at the Hofburg palace in downtown Vienna, spring and summer at Schoenbrunn palace, outside the city.

Life in Vienna was fun for Antonia – sleigh rides and drinking hot chocolate, picnics and playing in the fountains at Schoenbrunn on summer days. Antonia liked dancing and music. As a child, Mozart came to play for the court in Vienna, where he met Antonia (and according to legend, asked her to marry him).

Empress Maria Theresa, Antonia’s mother, had big plans for Antonia, her youngest daughter. When Antonia was twelve, her mother decided the perfect husband for Antonia would be heir to the king of France, dauphin Louis-Auguste.

It was time for Antonia to shape up, literally. She had a new royal governess, so Antonia would speak only French, not German. A new tutor arrived and found Antonia couldn’t really read or write. Her teeth were crooked, so a dentist came to straighten things out and a hair stylist created a whole new look. Then it was time for the perfect portrait to be sent to France.

The portrait was a success, and the French offered a marriage proposal. (That’s the portrait below, painted in 1769).

In Vienna, visit both Schoenbrunn and Hofburg palaces.

The gardens and fountains of Schoenbrunn are largely preserved as it was in Antonia’s time, plenty of room for kids to run around.

Take a tour of the palace, you’ll see portraits of Antonia, and her many siblings, furnishings are from a later time (Franz Joseph late 19th century). To find out how royal children lived, visit the Schloss Schoenbrunn Experience hands-on museum.

The Hofburg palace has two not-to-be-missed museums, the Treasury (Schatzkammer) with a stellar collection of Habsburg crown jewels (Marie Antoinette was not allowed to take any of the Austrian crown jewels with her to France) and the Arms and Armor Museum.

Off to marry heir to the king of France in April 1770, Antonia departed Vienna in a gold and glass carriage, accompanied by a very large procession of the royal court.

Two weeks later, when she crossed into France at Strasbourg, Maria Antonia left behind every bit of clothing from Austria, and became Marie Antoinette.

For the royal wedding at Versailles, Marie Antoinette wore a gown of silver white cloth, glittering with hundreds of diamonds. Louis and Marie Antoinette trooped through the Hall of Mirrors to the royal chapel for the wedding Mass. After a lavish wedding supper, teenage Marie Antoinette and Louis danced the minuet, without mistakes.

The food at Versailles was very rich, quite different the Austrian court. A typical meal had sixteen different courses and towers of fancy desserts.

The court ate with a large audience of people watching, Louis was a very hearty eater, Marie Antoinette lost her appetite. At least she could eat breakfast in her apartments, and have croissants.

Croissants were originally a Viennese pastry, but Marie Antoinette made it popular in France. 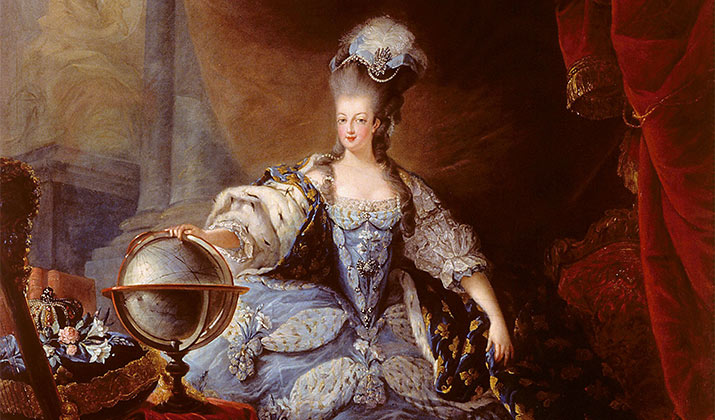 Getting dressed every morning took hours. The pouf hairstyle – a wire structure 3 ft high was fitted on her head, her hair arranged over it, powdered with white flour, then decorated with jewels and flowers. Her face was covered with white paste and red rouge circles. She wore heavy brocade, velvet and silk gowns, laced with tight corsets, and satin high heeled shoes.

Among the French crown jewels were the gorgeous French Blue (Hope Diamond), worn by King Louis XVI. Marie Antoinette was very fond of diamonds, often worn in her elaborate hairstyles.

In 1775, Marie Antoinette became the queen of France. Her husband, Louis XVI promptly gave her a golden key to the Petit Trianon, her own private palace at Versailles. 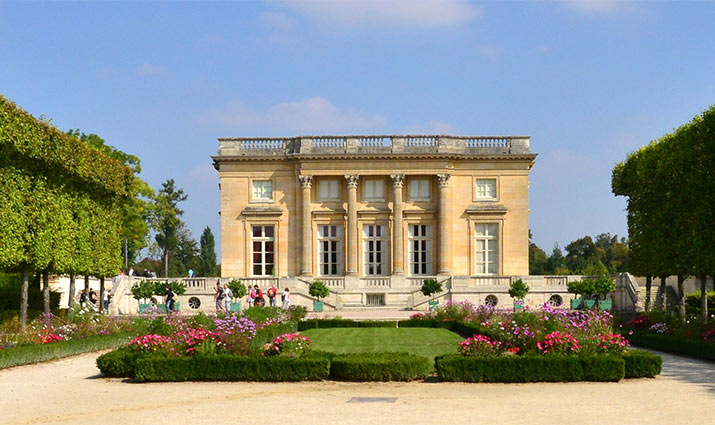 At the Petit Trianon, Marie Antoinette could escape life in a goldfish bowl of the Chateau. She entertained her friends with delightful parties that spilled out into the gardens in warm weather, and even Louis could only come to the Petit Trianon by invitation.

She directed her architect to create a grotto with waterfall, eight-sided tower, landscape an island and new lake, and redo the gardens in a less formal style. Marie Antoinette built a gilded little theater where she put on plays.

Marie Antoinette also wanted to build a farm for her children, where they could live “simply.”

At great expense, the Hamlet (Le Hameau) was created, a rustic village with thatched cottages, watermill, dairy, and lake. Cows provided milk, butter, cheese, a farmer and his wife tended sheep, goats, ducks and pigs. Marie Antoinette’s children had rabbits for pets, picked strawberries and gathered eggs. This was all quite idyllic, but real peasants in France were going hungry.

During the French Revolution, Versailles was looted and the French crown jewels stole, but today the Chateau of Versailles, with kings and queen’s apartments, and Marie Antoinette’s Estate, the Petit Trianon and Hamlet, are elegantly restored. 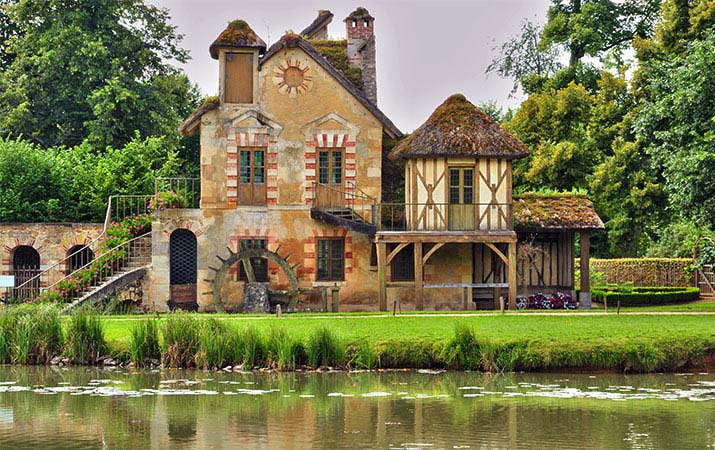 It’s best to visit the Petit Trianon and Hamlet, in summer, when the gardens are in bloom and kids can run around. This is also are area where there are far fewer tourists. A cafe is available near the Petit Trianon, but bring your own picnic.

Marie Antoinette’s young daughter and son liked playing at the Hamlet, and kids will have fun exploring the Queen’s House, dairy, and water mill. Look for cows, goats and sheep grazing in warm months.

Tip: It’s a separate admission to Marie Antoinette’s Estate (which includes Petit Trianon and Hamlet), and it opens at noon. Both the Chateau and Petit Trianon & Hamlet are closed on Mondays. 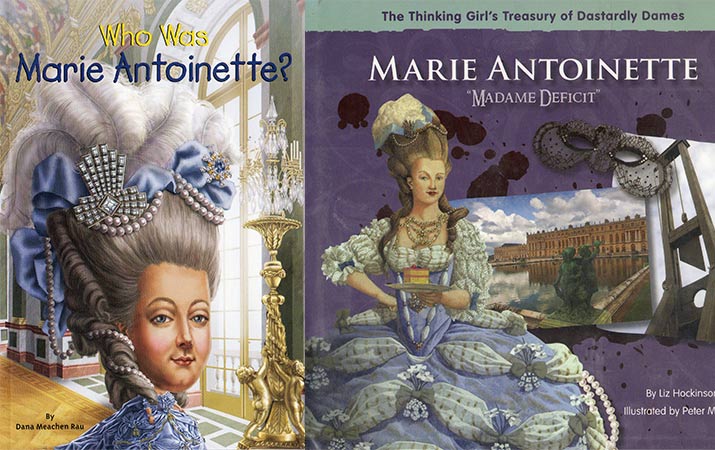