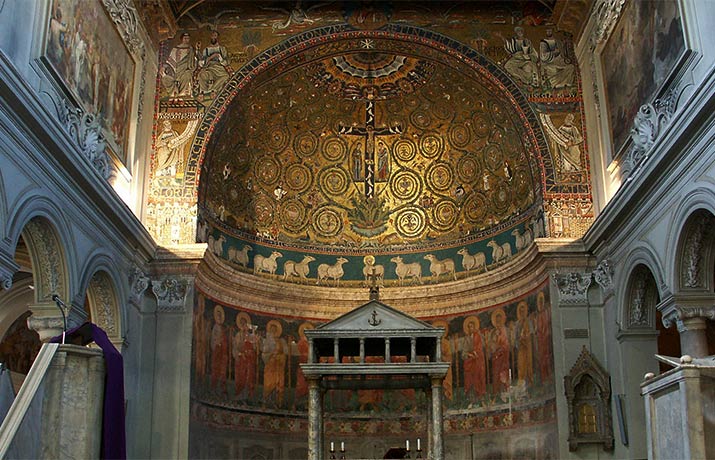 Basilica San Clemente is one of the oldest churches in Rome, and commemorates St. Clement who was the fourth Pope and lived in the 1st century AD.

According to stories of his life, St. Clement was tossed into the Black Sea and drowned by the Romans for preaching Christianity.

In 867 AD, the relics of St. Clement were retrieved and laid to rest here in the lower basilica. When the upper church was built in the 12th century, the reliquary of St. Clement was buried under the high altar.

The upper church was constructed over the ruins of an earlier basilica dating back to the 4th century. The 4th century church was built over a small temple to Mithras (2nd century), the Mithraeum adjoins a 1st century Roman apartment house (or building). 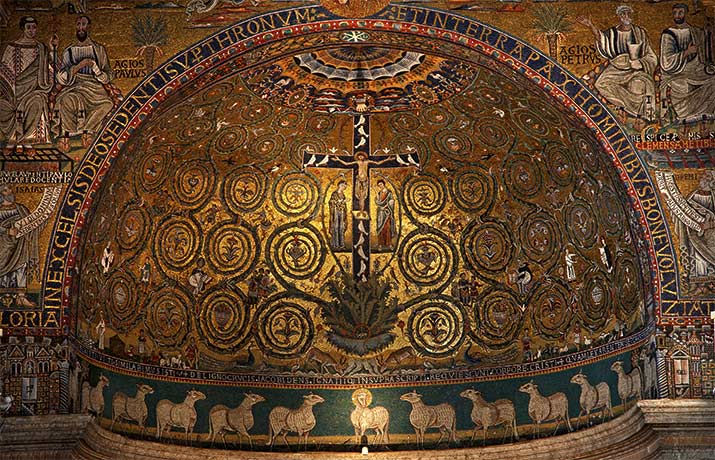 From the street, when you enter the upper church, it’s a long rectangular nave with a luminous 12th century Byzantine mosaic at the far end of the basilica.

The apse mosaic, in glowing red, blue, yellow, green colors, has a golden background with twirling vines of the tree of life, growing up from the bottom of the cross.

In the center, Christ is on the cross, surrounded by 12 doves, which represent the Apostles. Directly above is heaven and the hand of God, holding a circular crown of victory.

At the top of the apse are Christ and the four Evangelists, represented by the lion of St. Mark and angel wings of St. Matthew on the left, eagle of St. John and bull of St. Luke on the right.

The two large figures in blue and white at the top right are St. Peter (with white hair) and St. Clement (under his feet is a boat with oars).

The mosaic has fabulous details of plants, flowers, birds and animals.

At the bottom of the mosaic is the Lamb of God (Jesus) and twelve sheep (also representing the Apostles), with the city of Jerusalem on the right, Bethlehem on the left.

Just above the sheep, look for peacocks on either side of two deer drinking from the four rivers of paradise in the middle, and figures of everyday people are tending their flocks and feeding animals.

Before you leave the upper church to go to the next level (stairs near the right aisle of the basilica), look down at the striking Cosmatesque patterns on the floor. Cosmati work is inlaid marble triangles and squares in complex geometric designs.

As you go down the stairs to the lower church, look through the grating to see remnants of a catacomb.

The long corridor in front of you has fragments from excavations, and 9th century frescoes on the walls. Originally this was a large interior porch (narthex) for the basilica.

The 4th century fragments include crosses, heads embedded in the walls, and a reversible stone stab with pagan inscription one one side, Christian inscription on the other.

On the right side of the narthex are two especially vivid frescoes, depicting scenes from the life of St. Clement.

The first one (red tones with marvelous fishes) shows the miracle of a child caught in a high tide, but saved in St. Clement’s tomb under the sea, and returned safe and sound to his mother.

The second fresco (pictured below) is the procession of St. Cyril and St. Methodius, bringing the remains of St. Clement to be buried here in Rome. 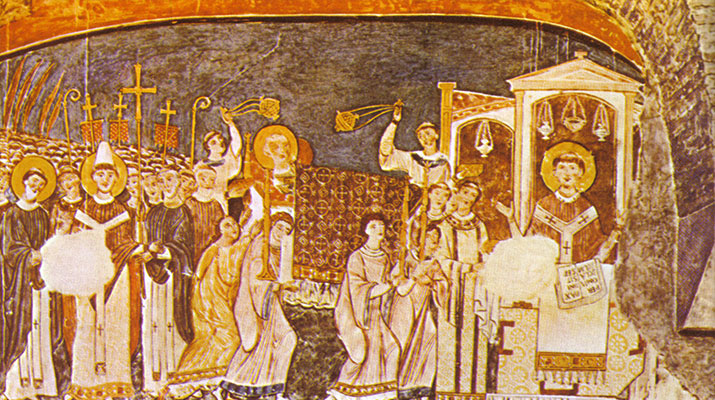 Go into the 4th century basilica, which has a long nave and aisles on either side.

Look down at the smooth worn mosaic floors, with designs in flowers and heart shapes.

As you explore the basilica, in the right aisle is a stunning fresco of Madonna and child (or also thought to be Theodora, wife of Byzantine emperor Justinian).

In the left aisle is the tomb of St. Cyril, and a replica of the Mithraeum altar (this is where you can see the altar on all four sides).

Continuing down the stairs to the next level, listen for the sound of water. 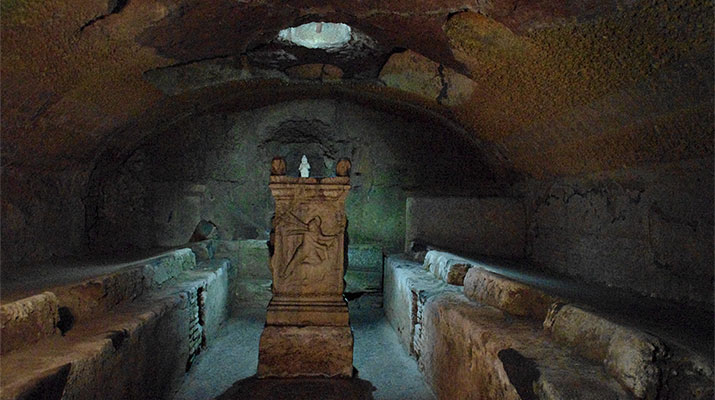 Most impressive is the small Mithraeum, a temple with altar of Mithras and benches on either side. Initiates (men only) would have sat on the stone benches to celebrate a ritual meal.

The altar in the center has a relief of Mithras slaying a bull. Apollo commanded Mithras, a god born of rock, to slay the bull to ensure fertility and renew life.

On the top of the altar are heads of Helios the sun god on the left, Selene the moon goddess on the right.

At the far end of the Mithraeum is a figure of Mithras at his birth, emerging from a large bumpy rock.

Follow the twisting tunnels and narrow stone passageways into two rooms of a 1st century Roman apartment house (or building) – it was around when Rome burned during Nero’s reign.

In the large room, check out the typical Roman herringbone brick pattern on the floor, squares in a diamond pattern on the walls, and barrel vaulted ceiling.

Sparkling water flows from a spring or unknown aqueduct (who knows where the water originates), gushing into a small channel, where it disappears from sight.

Listen to the sounds of centuries, all around.