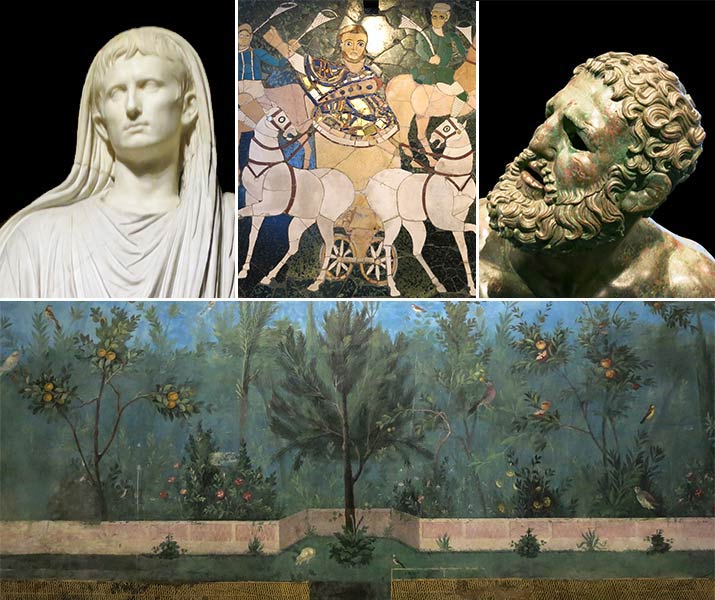 In Rome, one of the best museums for families is the Palazzo Massimo alle Terme, an amazing collection of ancient Roman sculpture, paintings and mosaics.

Located across from the Termini train station, it’s part of the National Roman Museums (Museo Nazionale Romano). Artworks are beautifully displayed, labeled in English, and the museum is not jam-packed with people like the Capitoline museums.

The museum has three floors (labeled ground floor, first floor, second floor on the museum map), and basement. We start at the top floor, and work our way down.

On this floor are fresh and exquisite wall paintings from ancient Roman villas, and spectacular mosaics.

Villa of Livia – In this gallery is reconstructed the summer dining room (20 – 10BC) of Livia, wife of emperor Augustus. Step into a blooming garden filled with oak, pine, fir, palm, and fruit trees. The paintings are so fresh, in the trees you can almost hear the birds singing, yet the murals are 2000 years old!

Villa Farnesina – Before you visiting the rooms, stop to see a video re-creation of the villa, which was located along the Tiber River, also in the time of Augustus. Bedrooms are decorated bright red, with Egyptian motifs such as sphinxes and the goddess Isis. The winter dining room, painted black to absorb heat and keep people warmer, has friezes of griffins and lovely geometric colorful mosaics on the floor.

In Gallery III, look for an Egyptian-themed mosaic with hippos and crocodiles, four stellar mosaics of charioteers (wearing white, blue, red, green, like those that raced in the Circus Maximus), and an inlaid marble panel (4th century AD) of a chariot race, an important personage waving his hand for the race to begin, and four riders.

Room X has exhibits about the Ships of Nemi. Caligula had two gigantic pleasure ships (which he sailed on Lake Nemi), covered in marble and mosaics. Check out a boggling bronze Medusa and lion, leopard, and wolf animal heads that decorated the ships.

The Romans were quite taken with Greek art, and on this floor are two original Greek lost wax bronze statues – the very realistic “The Boxer” (looks like it was a very tough fight), and “The Hellenistic Prince.” Don’t miss a gold-bronze portrait of Alexander the Great, and incomparable statue of Augustus from Via Labianca, dressed in clothing of the High Priest (Pontifex Maximus).

Pop down to the basement to see what wealthy ladies were wearing for jewelry in ancient Rome – golden snake armlets, cameos, golden hair nets, necklaces and bracelets with precious stones.

The coin (numismatic) collection is amazing – Roman coins, dating back to the 3rd and 4th century BC, through the Imperial eras, as well as coins of the Goths and Byzantines.

More photos on Travel for Kids .

Tip: Palazzo Massimo is one of the museums included in the Archaeologia Card. Purchase the card at the this museum (rarely long lines), and you can use the card for entrance to other sites such as the Colosseum, Roman Forum.