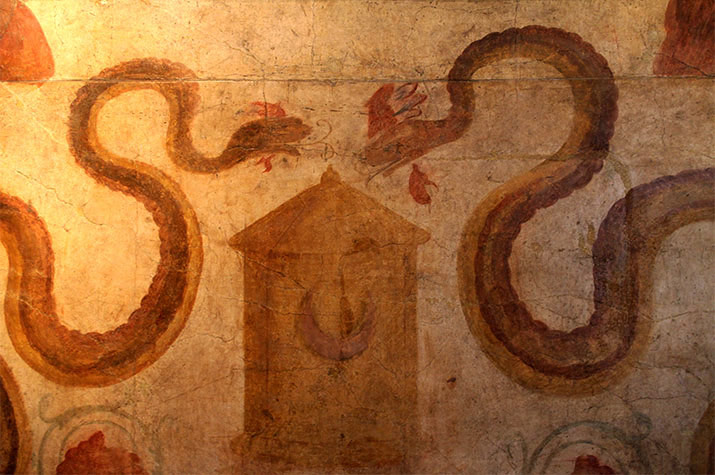 Serpents decorated household shrines, kitchens, shops, crossroads, and public temples in Pompeii. In these places, snakes are not scary or evil; quite the opposite, snakes are guardian deities and “bringers of abundance.”

Visiting the Naples Archaeological Museum and exploring ruins of Pompeii with kids, look for snake paintings.

In ancient Roman religion, there were different gods for every occasion. Protective deities, the Lares, sons of the god Mercury, became an essential element of household shrines (lararium). Lares are represented in figurines and paintings as young guys in tunics, carrying drinking horns.

Snakes, often accompanying the Lares, are also symbols of good fortune and guardian deities that protect the home, shop, neighborhood, or temple. In household shrine niches, offerings of fruit and eggs were brought for the snake deities, and some murals show snakes eating the offerings.

Room LXXV in the Naples Archaeological Museum has fabulous examples of lararium snake paintings, preserved from the ruins in the Pompeii. 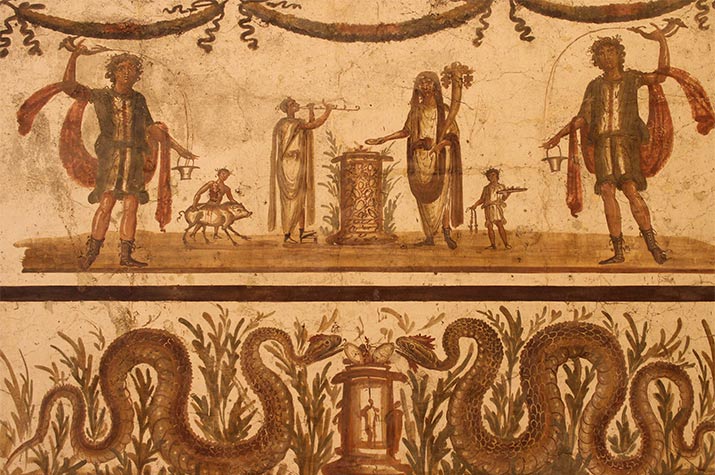 In a Pompeii house painting, two Lares are positioned on either side, holding drinking horns and dishes. In the center, the head of the family makes offerings, a musician plays, two smaller figures bring items for sacrifice (including a pig). In the panel underneath, two scaly but friendly-looking snakes are getting ready to nibble the offerings on the altar.

Check out two paintings from Sacrarium in the Temple of Isis at Pompeii. In one, the Egyptian goddess Isis is situated in a boat, rescuing Osris (floating on the water). Underneath are two lovely snakes, guarding a wicker basket with the lunar symbol (the basket would contain secret holy items, such as water from the Nile).

In another painting from the temple, Osiris-Serapis sits on his throne, surrounded by two festive cobras with flowers on top of their heads! A third snake twines around a tree.

From the House of the Centenary, the lararium painting features a mountain covered with vineyards and grape-covered figure of Dionysus, small panther next to him. Underneath is large single snake, moving toward the altar. 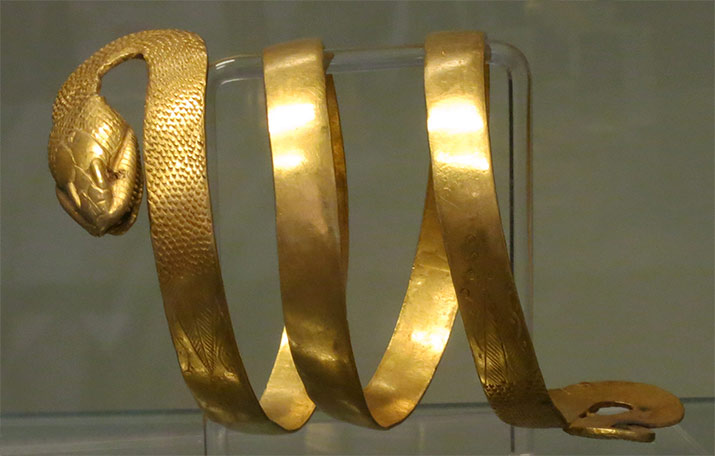 Also in the museum, don’t miss the double headed snake golden armband from Pompeii. As in the paintings, the snake on the armband is a symbol of protection, provided to the wearer.

The lararium paintings are beautifully preserved in the Naples Archaeological Museum, but be sure to see the paintings situated in actual houses and locales in Pompeii. 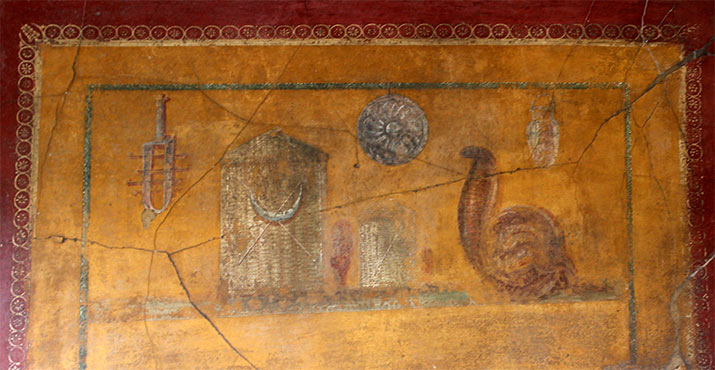 In the House of the Amorini Dorati (House of the Gilded Cupid), you’ll find snake paintings in a corner next to the peristyle garden. At the bottom are two curly yellow snakes, hovering over the altar in the corner; above them is an Egyptian style painting, with cobra, wicker basket with lunar symbol (as in the Temple of Isis painting), and other objects for worship. 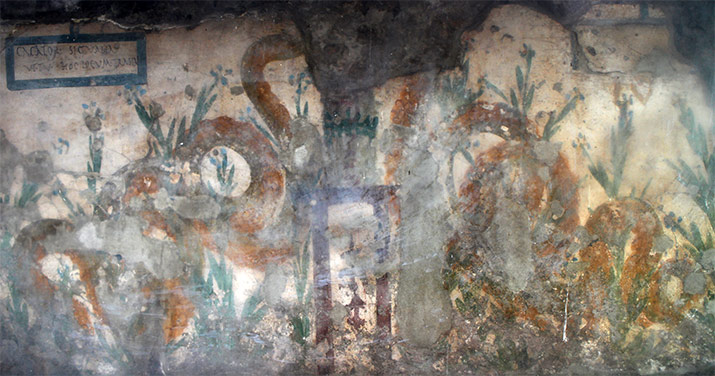 Neighborhood crossroads were also protected by lararium paintings, and offerings were given. At the Porta Vesuvio (Vesuvius Gate), on the northeast side by the path that goes behind the city walls, look for the painting (little hard to see behind the protective plastic). Just imagine a Roman standing at this same intersection, almost two thousand years ago, looking at two golden snakes, surrounded with leafy green foliage. 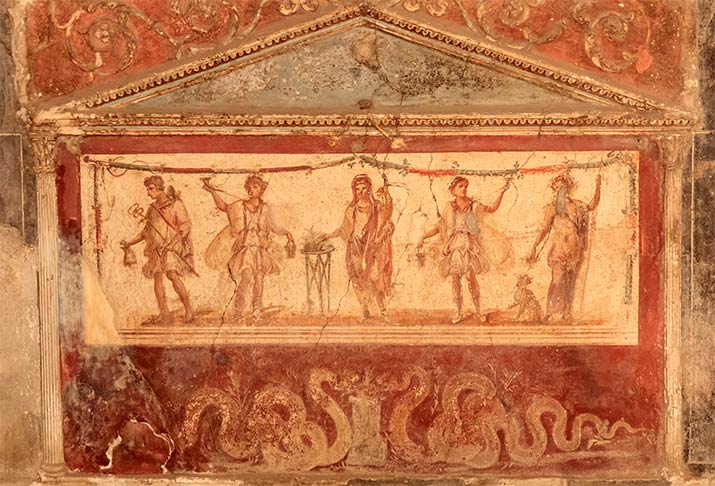 On of the best preserved lararium paintings is in the Thermopolium of Lucius Vetutius Placidus, on Via dell’Abbondanza. At the thermopolium (snack bar) drinks and hot food were served. On the back wall is a painted shrine for the guardian deities of the shop. In the middle, the master of the house makes offerings, on either side of him are the Lares (holding their drinking horns). On the far left is the god Mercury (god of trade), on the far right is Dionysus (god of wine). Below, two wavy serpents make their way to the altar in the center.

While exploring the ruins at Pompeii, keep an eye out for more lararium snake paintings – the three above are just those we saw on our visit.