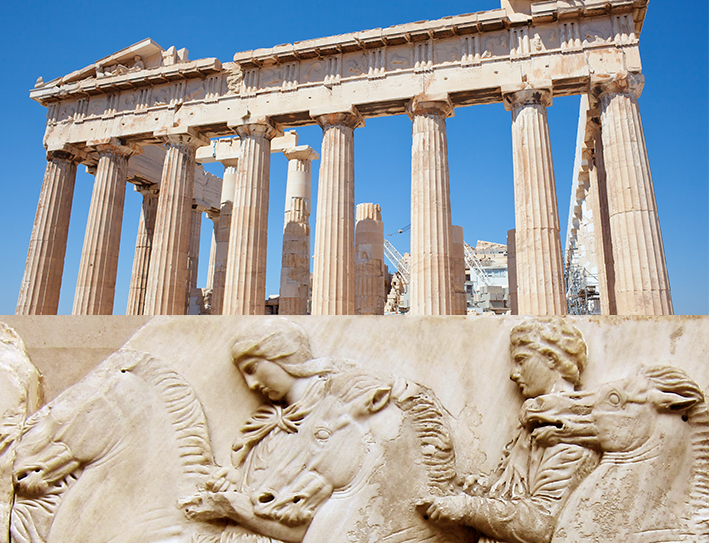 The Parthenon in Athens, a “wonder of the world,” is a symbol of classical ancient Greece.

Over the centuries, the Greek temple was used as a Christian church, mosque, and fortress.

Today the Parthenon is a gleaming marble monument slowly emerging from the ruins, as archaeologists re-build it block by block.

The original sculptures of the Parthenon are now in two different locations – Athens Acropolis Museum, and British Museum in London.

Our boys first saw Parthenon sculptures on a summer trip to London; on a later spring vacation in Greece, we explored the Acropolis.

History of Acropolis and Parthenon

The Acropolis, a rocky limestone plateau, has been inhabited since 3500 BC.

Starting in the 8th century, temples built on the Acropolis were dedicated to the goddess Athena, patron of the city.

Athena is the daughter of Zeus, leaping out of his brain fully formed. She was a warrior who protected heroes such as Perseus, Odysseus and Hercules in battle, she invented weaving, spinning, music, and tamed horses.

In summer, Athenians celebrated the goddess Athena’s birthday with a big festival, the Panathenaia, which included a long procession of people bringing a woven robe (peplos) to a temple on the Acropolis. 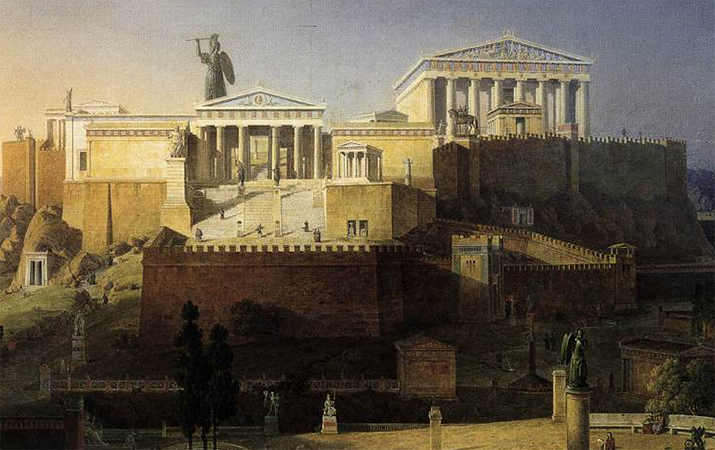 The Parthenon was built between 447 and 432 BC (Classical era), and is dedicated to Athena Parthenos.

An amazing construction of perfect marble, the temple had two rooms – in one room was a colossal statue of Athena, in the other, gold and silver treasures were stored.

Created by the great Greek sculptor Pheidias, the statue was 40 ft (12 m) high, and covered with gold and ivory.

In one hand Athena held a shield with a coiled snake, on the other hand was delicately balanced statue of Nike. She wore a garment fringed with snakes, and a medallion with the face of the gorgon Medusa.

On the temple pediments (triangular spaces at the roof line) were dramatic scenes of Athena’s birth and a contest between Athena and Poseidon.

The Parthenon was also decorated with a carved frieze that went all the way around the four sides of temple, with scenes of horsemen, and a procession, thought to be the Panathenaic Festival.

The Classical era was a highpoint in the history of Athens.

After that, Philip II and Alexander the Great took over the city – Alexander hung up shields, booty from his conquests, on the east side of the Parthenon (look for the holes in the marble).

When Rome conquered Greece, Augustus set up his own temple near the Parthenon, but largely left it alone.

In the Byzantine era, the Parthenon was re-purposed as a Christian temple. Paintings were added to the interior, and the Christians whacked away at the pagan carvings, especially the metopes (rectangular blocks) above the outer columns.

In the Middle Ages, the Acropolis was used as a fortress, Italian and French conquerors renovated the Propylaea (gateway) as a residence.

The Ottoman Turks erected a mosque and minaret inside the Parthenon in the 15th century. The Acropolis was now a military base and the Parthenon used to store gun powder.

In 1687, the Venetians fighting the Turks lobbed hundreds of cannonballs at the Parthenon, the gun powder exploded. Columns fell down, the roof was blown off, and the Parthenon became a ruin.

During the 19th century, Europe was fascinated by ancient Greece, and tourists came to see the Parthenon. Both the locals and visitors carted off bits of statuary and sculpture from the Acropolis (one of the sculptures was found on a house in Athens).

Lord Elgin, the British ambassador to Constantinople, eager to save the sculptures of the Parthenon, removed parts of the temple to London.

In 1816, the British Museum purchased the “Elgin Marbles,” and that’s where you’ll see them today.

It’s extraordinary for kids to visit the Acropolis and Parthenon in person.

Go later in the day, when the creamy marble changes color as the light changes.

Also, we liked the view from Filopappos Hill (Filopapou Hill), much less crowded, and at a distance, the Parthenon seemed more impressive, rising out of the plateau.

The temple is an active archaeological construction site with scaffolding and cranes, and in summer, crowds of tourists are tromping around.

On the top floor gallery of the museum, kids can walk around the Parthenon sculptures – east and west pediments, four friezes, metopes.

The floor plan is the same size and orientation as the temple on the plateau. On the pediments and friezes are plaster cast replicas from the original sculptures now in the British Museum.

On the east pediment is a scene of Athena’s birth – Zeus sits on a throne, Athena stands big and tall next to him, on either side are horses of the sun. On the west pediment, Athena challenges Poseidon, god of the sea, to a contest.

All three friezes lead to the east frieze, with the gods seated, waiting for the event to begin, and a priest and child holding a square of cloth (peplos) an offering to Athena.

The metopes portray battles between the gods and giants, Greeks and the Amazons, centaurs (half horse, half human) and the Lapith people, and scenes from the fall of Troy.

Don’t miss the Archaic Gallery on the first floor, with older temple sculptures that preceded the Partheon.

Our favorites are the three headed monster with a curly snake tail called “Bluebeard” (the guys have dark blue beards), Hercules fighting the Triton sea serpent, smiling kore ladies with lovely gowns and long curly hair, and Athena with snakes on her wrist, fighting a giant.

Tip: On the Acropolis, around the Parthenon are more temples, theaters, marketplace.

This is a large area, so allow plenty of time to explore, run around, and if possible visit more than once. Read more on Travel for Kids: The Acropolis. 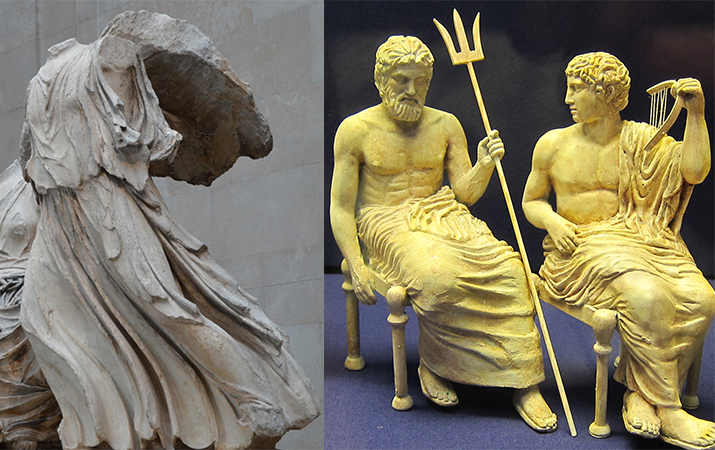 Before going into the museum, as you’re walking up the steps of the south entrance, look up. The entrance has a pediment and columns in classical Greek style, inspired by the Parthenon.

The Elgin Marbles are displayed in a long gallery, but don’t rush in here first.

Stop into the preceding gallery on the right – there are explanations of the sculptures and exhibits kids can touch. Check out models of the Parthenon, east frieze with all the gods, a horsemen metope, and temple sample painted in colors of red, blue and gold.

At the left corner is the sun god Helios (or Dionysus) and four horses, on the right side is the moon goddess Selene and a magnificent horse head on a separate pedestal.

At the opposite end of the gallery are two sculptures from the west pediment – a reclining river god, and Iris, goddess of the rainbow.

(The middle sections of east and west pediments are in the Athens Acropolis Museum.)

Along the walls of the gallery are sections of the four friezes. Lines of horsemen are spectacularly carved in marble – look at all the details of horses and people from almost 2,500 years ago!

For the east frieze, the marble relief is somewhat mushy, but the story is fascinating.

The ancient Greek gods are lolling on couches and waiting for the ceremonies to start, in the middle is a child and priest holding a sacred square of cloth (peplos). 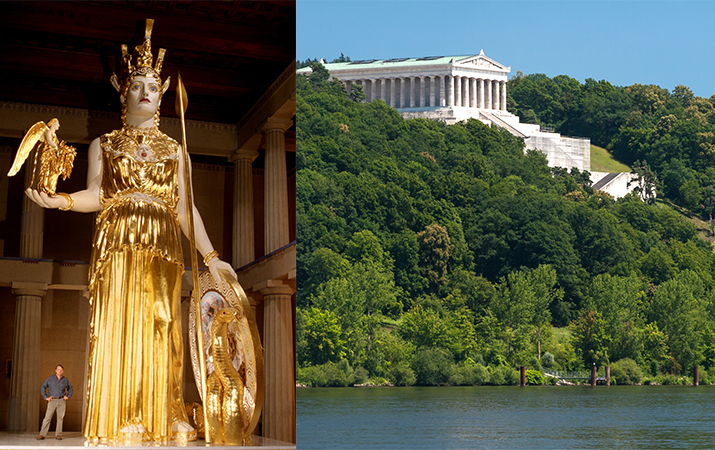 Around the world are replicas, and buildings inspired by the Parthenon.

In Nashville Centennial Park is complete replica of the Parthenon, on the pediments are plaster casts made from the original sculptures.

Inside is a 42 ft statue of Athena, based on existing small copies of the long-lost Athena colossus. The sculptor Alan LeQuire used the latest archaeological studies to cast the statue, which was then gilded, the face and shield painted in glowing colors.

Also in the United States, for buildings inspired by the Parthenon, check out the facade of the Lincoln Memorial and the Supreme Court building in Washington DC.

As a day trip from Regensburg, we took a boat ride down the Danube; the lunch stop for the cruise was Walhalla.

We had no idea what that was, but walking up the hill from the river, we suddenly saw a shining Greek temple looming above us.

In the mid-19th century, the building was commissioned by King Ludwig I, as an homage to classical Greece (symbolized by the Parthenon), and a memorial to display statues of important Germanic people throughout history.

This Parthenon replica, situated in a leafy green forest above the smooth flowing Danube River, is quite a contrast to the Parthenon on the sunny, rocky Acropolis plateau.

In Edinburgh at the end end of Princes St. is Calton Hill. Climb up the hill, and there’s the National Monument of Scotland. The monument is dedicated to Scottish soldiers who fought against Napoleon. Started in 1825, and modeled on the Parthenon, the landmark was never completed.

Calton Hill has panoramic views of the city and Arthur’s seat. Bring a picnic and kids can run around. 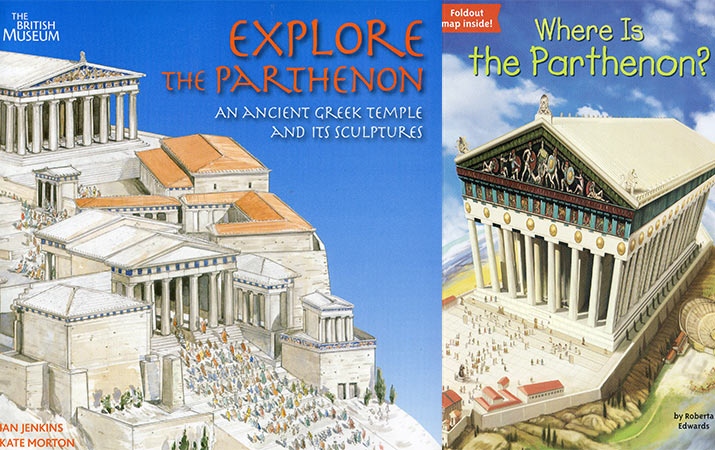 Here’s our list of children’s books about the Parthenon and ancient Greece. At the bottom is a guidebook to the Acropolis and Acropolis Museum, perfect to bring on your trip.