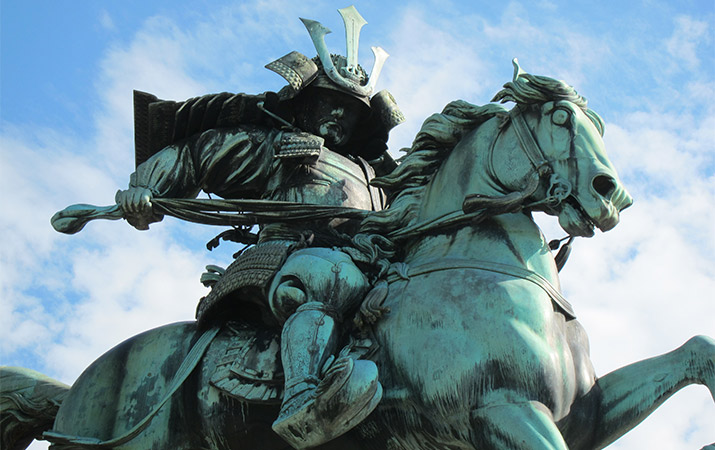 Japanese samurai were elite warriors, highly skilled in sword-fighting, archery, and horseback riding. They were loyal to a daimyo (feudal lord), who supported the Emperor or Shogun (military general). By the end of the 12th century, the Emperor remained hereditary ruler of Japan, but the Shogun had centralized power, and controlled armies led by samurai.

In 1603, the Tokugawa Shogun relocated the capital to Edo (Tokyo). He ruled Japan from Edo Castle, an immense castle complex, strongly fortified with moats and stone walls. Keeping peace was not easy, with competing clans ready to go to war, the Shogun kept daimyo and samurai close at hand.

Exploring Tokyo with kids, go up the high hillside where the donjon of Edo Castle once towered over the city, find samurai armor and swords in museums, and visit Sengakuji temple of the Forty-Seven Ronin – samurai who were loyal to the end. 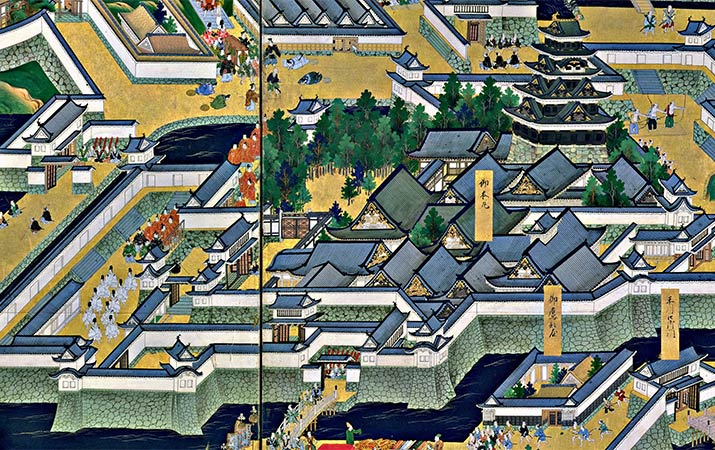 Where Edo Castle once stood is now the Imperial Palace area in downtown Tokyo.

Today it’s hard to get a sense of the enormous size of Edo Castle – an outer moat 10 miles (16 km) around protected an equally fortified inner moat area. The castle was closely guarded and only select people could enter through entrance gates and high bridges over the moat into castle grounds. In the outer castle, daimyos and their families lived in elegant mansions, it was a busy area like a small town.

The Shogun’s private family residence and halls for official ceremonies were located in the inner moat area, defended by massive granite stone walls and guardhouses. One section of the Edo Castle inner moat area is now the Imperial Palace East Garden.

Statue of Kusunoki Masashige on horseback (photo at top) is a dramatic introduction to samurai legend and lore. Kusunoki was a heroic 14th century samurai who obeyed the Emperor’s orders in battle, but lost his life. Find the statue the southeast corner of the garden.

Tip: The open space and benches around the statue are a good spot for picnic lunch, a snack bar close by has cold drinks.

Enter the East Garden through any of the gates – Ote-mon, Hirakawa-mon, or Kitahanebashi-mon – crossing over the moats. Check out the thick stone walls above the water, and think about how hard it would be to attack this castle.

Make a beeline for the Honmaru area, and climb up the walkway to the Tenshudai donjon, (though only the foundations remain). At the top, close your eyes, and imagine there is a black tower, five stories high, the tallest castle keep in Japan at the time, symbol of the Shogun’s power. 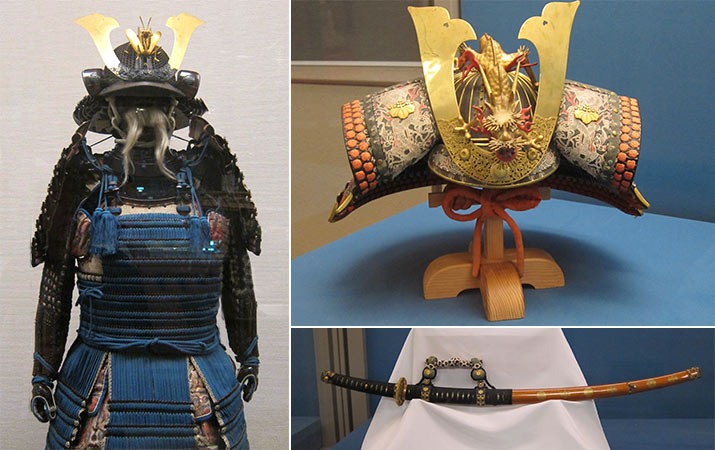 Samurai trained intensively for battle – swords, armor, helmets were a matter of life and death.

Samurai wore two swords – a long sword (katana for fighting on horseback or tachi for fighting on foot), and shorter straight sword (wakizashi). Only samurai could wear two swords, and they also displayed the clan crest on their clothing. Other weapons they used in battle were arrows, spears (yari) and daggers (tanto).

Samurai armor protected the samurai with chest, shoulder, leg and neck guards, and helmets with striking crests. Masks were decorated with mustaches and painted to frighten enemies with a “devil face.”

Swords were the “soul of the samurai,” and sword makers extraordinary craftsmen. Swordsmiths forged iron into the finest steel, which was polished razor sharp. Other artisans made the scabbards, sword hilt (tsuka) and sword guard (tsuba), decorated with birds, flowers, animals.

On the first floor is a gallery with Japanese swords; go up to the second floor for two rooms with an excellent display of samurai armor in different styles, swords, lacquered masks, and impressive helmets.

In the museum, check out the scale model of Edo Castle, with a diorama of the Pine Corridor (gold screens decorated with pine trees) where Lord Asano attacked Lord Kira.

In this museum kids will see the incredible craftsmanship of samurai swords, signed by the sword maker. The museum is just one room, but it has ancient collection of sword blades dating back to the 13th century – long blades (katana and tachi), short straight blades (wakizashi and tanto), plus sword decorations in the shape of lions and tigers, ornate hand guards (tsuba), and beautifully decorated scabbards.

Sengakuji Temple and the Forty-Seven Ronin

One of the most famous samurai stories took place here in Tokyo.

In 1701, a daimyo Lord Asano, confronted Lord Kira at a court event inside Edo Castle. Although it was forbidden to use a sword inside the castle, Lord Asano drew his sword in anger, and injured Kira. Lord Asano was immediately sentenced to death, and he committed seppuku (ceremonial suicide).

As a result, all of Lord Asano’s samurai became ronin, samurai without a leader. Forty seven ronin vowed to avenge Asano’s death, and secretly plotted to kill Lord Kira. Two years later, the ronin attacked Lord Kira in his well-guarded mansion, and cut off his head.

The forty-seven ronin marched to the Sengakuji temple where Lord Asano is buried, and placed Kira’s head on their daimyo’s tomb. Knowing they broke the law by killing Lord Kira, all the ronin committed seppuku two months later, and are buried in the same temple.

Read the full “Story of the Forty-Seven Ronin” in Tokyo.

The Sengakuji is our favorite samurai locale to visit in Tokyo. Entering the temple, on the right is a bronze statue of the leader of the ronin Oishi Kuranosuke, holding a scroll with names of the forty-seven ronin.

Be sure to stop both museums to see original armor and helmets, and stellar wooden statues of each of the forty-seven ronin.

Walking to the graveyard, you’ll pass by the well where the ronin washed Kira’s head before placing it on Asano’s tomb.

At the graveyard (video above) inside the large enclosure are lines of stone markers for each ronin, incense burns in front of the graves. Oishi’s grave is the single stone marker topped by a wooden roof. Lord Asano and his wife are buried separately, just outside the enclosure.

To get to Sengakuji temple, take the Asakusa subway line, get off at the Sengakuji stop (exit 2), walk up the hill and you’ll see the large wooden gate before the temple complex.

Read about samurai life and lore, history and adventures of legendary samurai, famous battles, and what it meant to be a samurai.

Tip: Visiting Tokyo, read our “Tips for Tokyo” – getting around on the subway, restaurants and restrooms, and also “Tokyo Family Hotels” for our list of hotels, near to fun things to do with kids in the city.