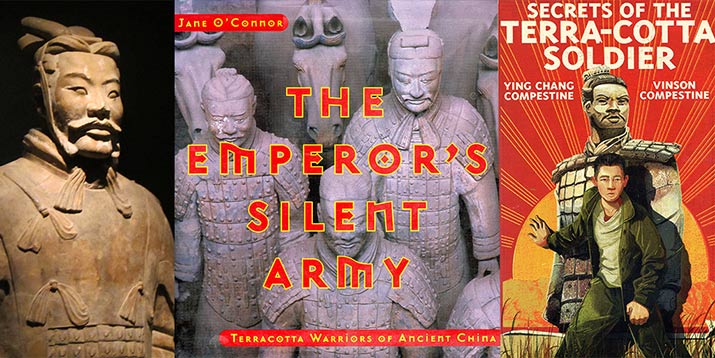 It’s quite a trip to Xi’an in China to visit the mausoleum of the first emperor of China and the fabled terracotta warriors. But one of the great things about summer is, with books to read, we are transported thousands of miles and years away.

In 1974, farmers digging a well discovered the head of a life-size terracotta soldier. Archaeologists uncovered thousands of clay warriors, along with bronze chariots and actual weaponry in the burial complex for the Emperor Qin Shi Huang, created over 2,000 years ago.

The terracotta warriors were buried in separate pits near the actual tomb of Qin Shi Huang (not excavated). Like real life warriors, the clay army would protect the emperor from his enemies.

What’s truly boggling about the terracotta figures is the detail and individuality. Generals wear spiffy armor, long sleeved robes, double knot headgear, and would have been painted red, blue, green and black. Soldiers with crossbows and standing archers are positioned as in a real battlefield. Sturdy horses, hitched to wooden chariots, are ready to rush forward.

Here’s both non-fiction and fiction books for kids to read, and travel to a wonder of the ancient world: