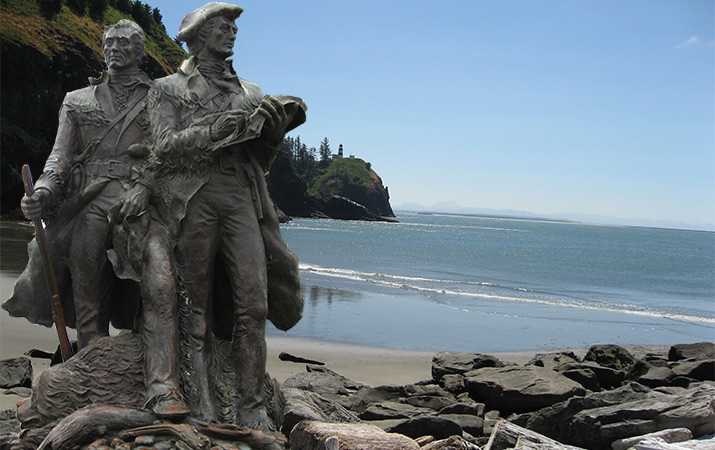 In November 1805, the Corps of Discovery expedition, led by Lewis and Clark, reached the Pacific Ocean. “We behold with astonishment the waves dashing against the rocks and this immense Ocean!”

Explore Cape Disappointment, Washington and Fort Clatsop in Oregon with kids, following in the footsteps of Lewis and Clark.

President Thomas Jefferson proposed an expedition in 1802 to explore unknown western lands, following the great rivers across the continent. Meriwether Lewis and William Clark assembled the expedition, and departed from St. Louis with a group of young men, and a dog in May 1804. Along the way, the Corps added an essential member, a young Shoshone woman Sacagawea (with a new baby), who helped guide the expedition.

A year and half later, the Corps of Discovery paddled their dugout canoes through rain and high waves on the Columbia River. Lewis and Clark spent a month exploring the north (Washington) and south (Oregon) side of the river, then built Fort Clatsop for their winter camp. The Corps lived four and a half months at Fort Clatsop, preparing for their homeward journey.

When the expedition returned safely in 1806 (only one person died on the whole trip), what an adventure it had been! The Corps crossed unexplored wilderness to the Pacific Ocean, they mapped the continent, collected plants, animals and minerals, wrote detailed information about the customs and languages of Native Americans, survived hardship and life-threatening dangers. Their contribution is a lasting one – not about conquest, it was a voyage of discovery.

Tip: At Thomas Jefferson’s home Monticello, in the Entrance Hall take a look at the artifacts brought back by Lewis & Clark, including a painted Mandan buffalo robe, Native American shields, pipes, bow and arrows, deer and elk antlers.

The first days of the expedition in Nov. 1805 were miserable. They first camped on the north side of the Columbia River on a rocky cliff (now Station Camp) in terrible rain and fog, high waves on the river, their dugout canoes nearly smashed to bits. 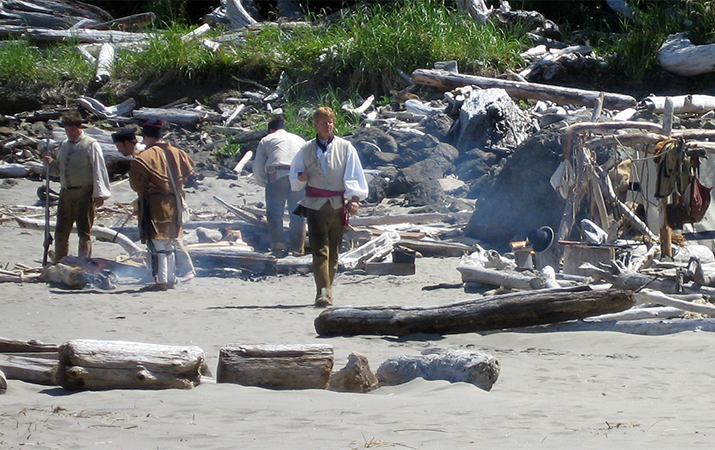 The Corps hunted for food, mapped the Columbia River and explored the area, including Cape Disappointment. Lewis made a solo trip, then Captain Clark took a group to survey the coast, and camped near McKenzie Head. There for the first time, the Corps saw an immense blue ocean, the Pacific. 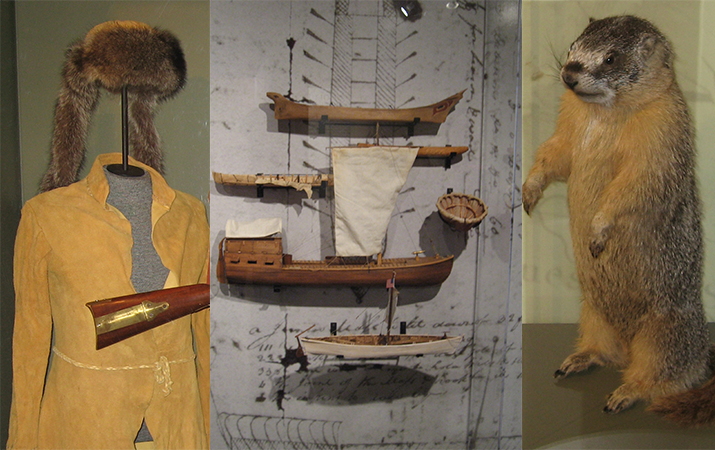 The Interpretive Center is an excellent introduction to the Lewis and Clark voyage of discovery, with hands-on activities and first-hand accounts from the expedition. Kids can choose provisions to eat along the way, learn how to hunt animals for food with a rifle, use words in different Native American languages, load a canoe so it doesn’t tip over.

From the center, take the short (less than mile) trail through lush forest Cape Disappointment Lighthouse. Half the trail is in dense forest, and kids will feel like William Clark, who explored this headland. 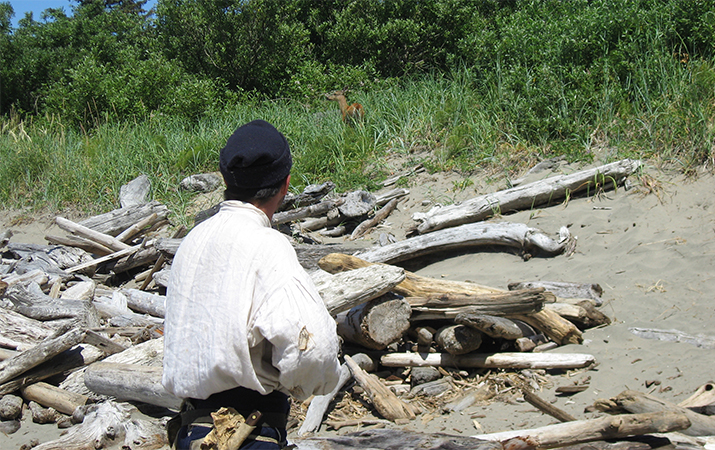 On our visit, we stepped into a living history re-enactment, “Clark’s Campsite.” Dressed in period clothing, volunteers set up a traditional campsite from 1805, similar to Clark’s camp at Mackenzie Head, and kids can ask them questions. The living history was quite realistic – one guy was over by the trees, pointing his rifle at a live deer (much needed food for original expedition). We somehow startled the deer, it ran off, and the volunteer glared at us, as well he should, we’d scared away dinner.

Note: Lewis and Clark did not name Cape Disappointment (although they hoped to find a Northwest Passage). In 1788 an earlier explorer, a sea captain John Meares, searched for an entrance to the Columbia River. Not finding a way through, he called the headlands Cape Disappointment. 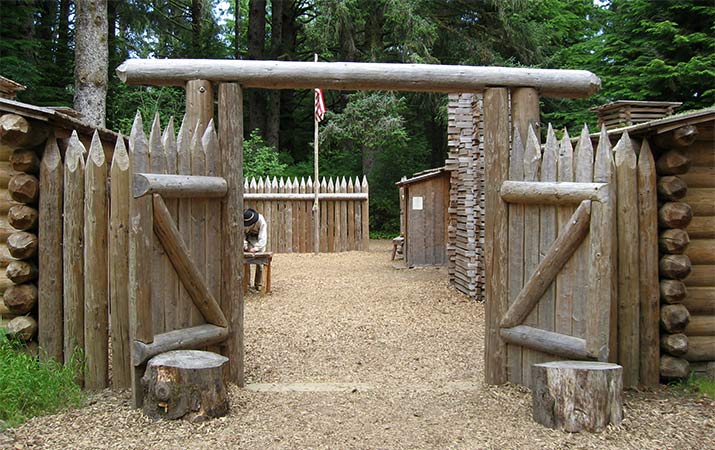 The expedition made their winter camp at Fort Clatsop, named after the Clatsop Indians living in the area. It took about three weeks to build Fort Clatsop, with an exterior 50 ft wooden wall and gate, inside seven small cabins and open space down the middle. The Corps, 33 adults, plus one baby, lived in these cramped quarters all winter. Kids can sit in a bunk bed and imagine fleas biting all night, rain drumming on the roof …

During the long winter months, despite days and days of rain, the group worked hard to ready for the return journey. They repaired weapons, sewed moccasins and elk skin clothing, made candles, dried and smoked meat, bargained for whale oil, set up a salt works on the coast. Clark worked on his maps, Lewis wrote detailed descriptions of animals, plants, traditions of the Clatsop (their journals and collections are preserved to this day). 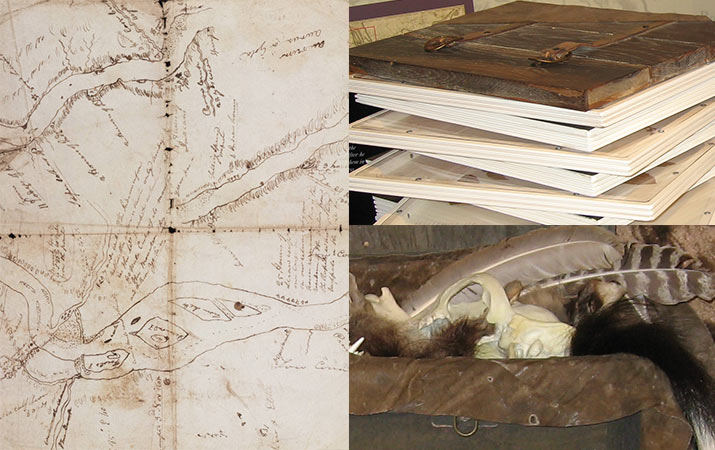 At Fort Clatsop in the summer months are demonstrations, such as firing a flintlock rifle, writing with a quill pen (look at the handwriting in Lewis and Clark’s journals), making candles, or hear about the youngest member of the expedition, Sacagawea’s baby boy, Jean Baptiste, nicknamed Pomp.

It’s just a short distance down the Netul River Trail to the Canoe Landing, where Lewis and Clark arrived in December 1805 to set up the fort. At the landing are replicas of the dugout canoes.

Continue down the trail to the river at Netul Landing (1.5 miles); with picnic tables, it’s a great place for lunch. Kids can look out over the river and imagine there’s a carved Clatsop dugout canoe paddling by. 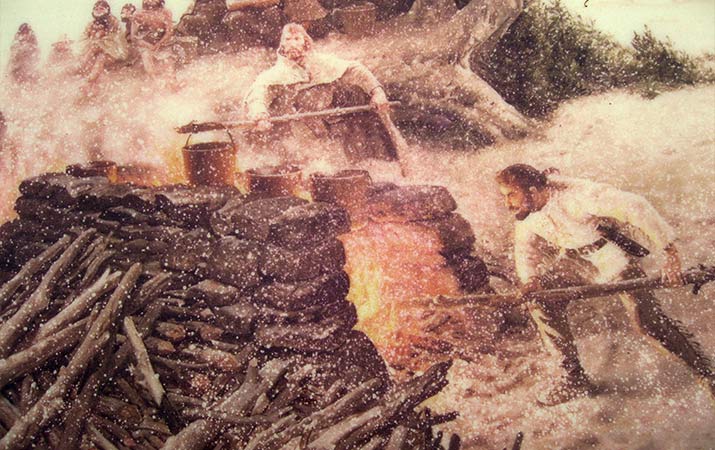 In January & February 1806, the Corps camped at the ocean to make salt, needed to preserve food for the return journey.

To make salt from sea water, the men built a stone oven, lit roaring hot fires, then boiled huge kettles of sea water day and night. When the water boiled away, the result was white sea salt, which was packed into wooden kegs. 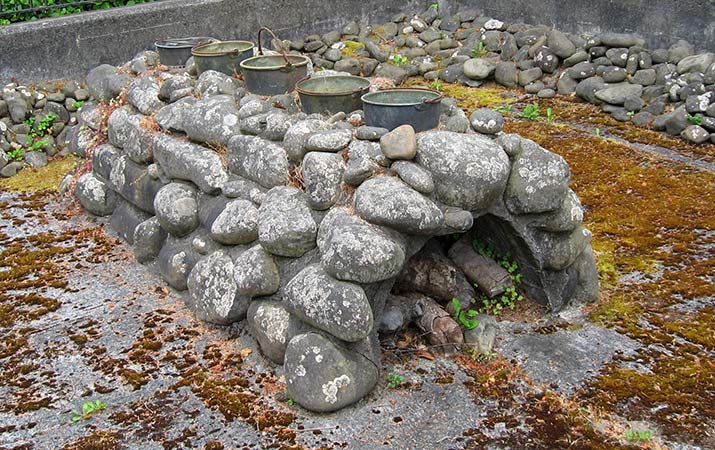 In Seaside is a small re-creation of the Saltworks, a stone oven and kettles for boiling sea water, located on Lewis & Clark Way and S. Beach Dr.