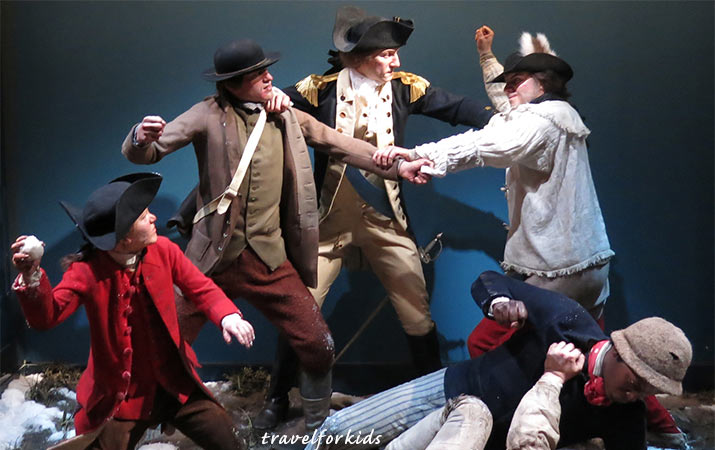 We took a trip to see the new Museum of the American Revolution in Philadelphia.

The museum presents the story of the American Revolution and founding of the United States with re-created historical moments, immersive theater and hands-on experiences, personal stories, authentic artifacts, such as muskets and swords, poems, newspaper with Declaration of Independence, and George Washington’s war tent.

Galleries in the museum go beyond events in Boston and Philadelphia to include the war at sea and in the South, role of Native Americans, women, free and enslaved African-Americans, and the legacy of a new nation.

The museum also has a children’s gallery, where kids can try on Revolutionary-era clothing, make flags and tents. Older kids with some knowledge of the American Revolution, will get the most of out of this museum.

Tip: Before going up the upstairs galleries, first stop into the ground floor theater to watch a short movie, an excellent introduction to the museum.

The Road to Independence 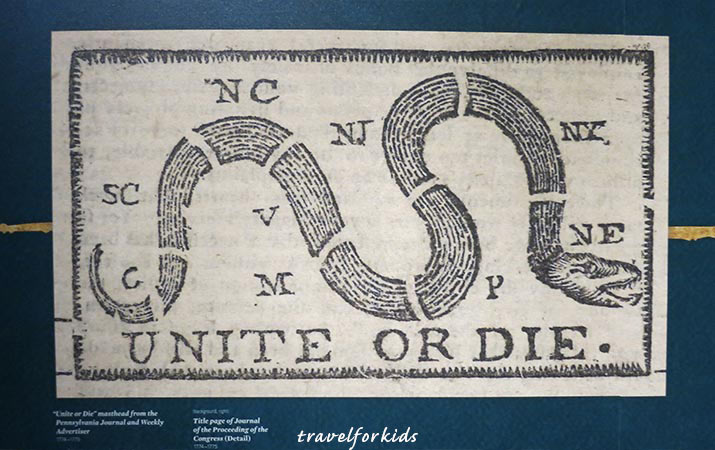 These galleries trace the road to revolution, why people became revolutionaries, announcing independence, preparing for war, organizing an army.

Ben Franklin’s political cartoon (above), published in 1754, highlighted need for colonies to stick together against unfair treatment by Great Britain. 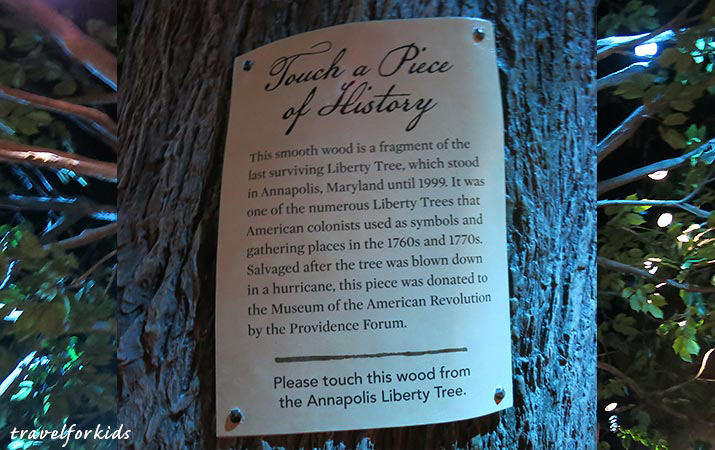 Check out a life-size replica of the Boston Liberty Tree, a meeting place where people gathered to discuss revolution against the British. Kids can touch a genuine piece of wood from a 1775 Liberty Tree in Maryland. 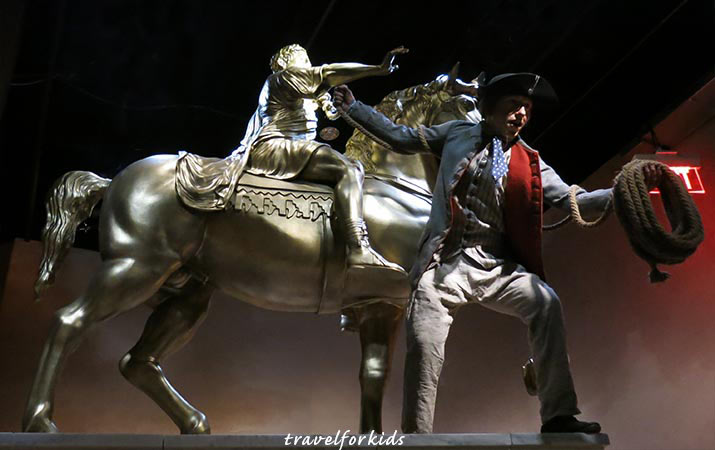 July 9, 1776, George Washington and his troop assembled in New York City to hear the Declaration of Independence read to all. Afterwards, soldiers pulled down the huge gilded statue of George III wearing a Roman toga and seated on horseback. 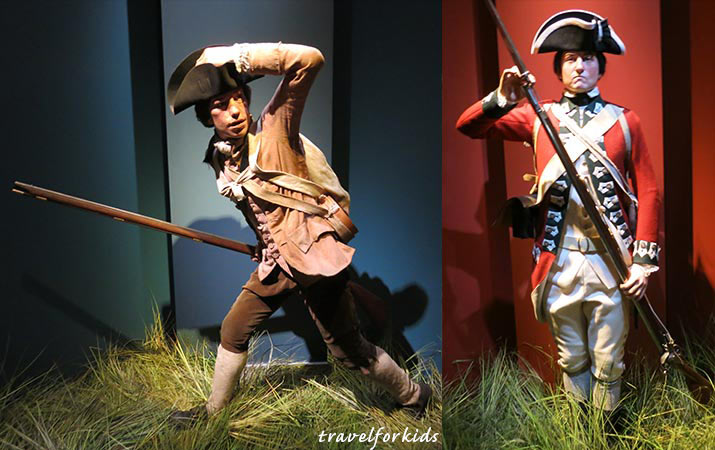 This area of the museum focuses on campaigns, battles, uniforms, weapons of the Revolutionary War, and the people who fought.

Profiles of two soldiers (above) – Joseph Plumb Martin (Patriot) and William Burke (British). Joseph was a teenager who joined the army, and saw first battles, as the Americans lost terribly to the British in New York. William, age 24, survived the war, but described America as a place of “trouble and sorrow.”

On display are an impressive collection of original weapons – swords, pistols, muskets, cannonballs. Also, find out about different American uniforms, decorated with deer tails or red liberty caps, fringed hunting shirts, moccasins – all these items identified the revolutionaries from the red-coated British. 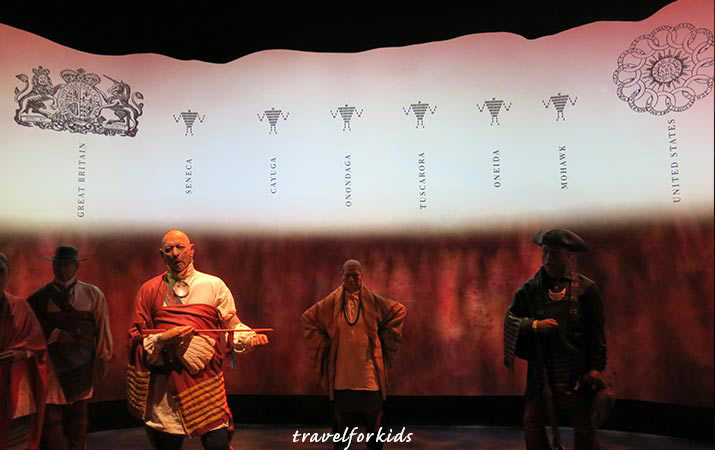 In the Oneida Indian Nation Gallery, watch a multimedia presentation, as you walk around six lifelike figures, debating whether to support the Americans. Both the Americans and British asked the native people to join their side – the Oneida Indian Nation chose to join the United States, becoming its first allies and enduring hardships through the war. 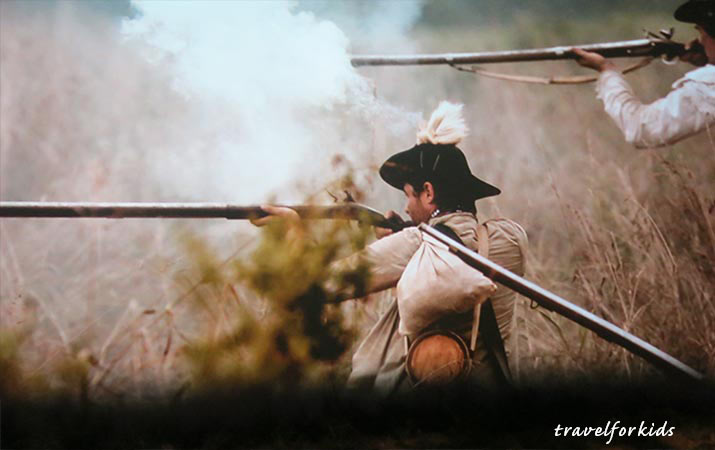 Step into the Battlefield Theater for a movie recreation of the Battle of Brandywine. Kids can imagine they’re in the Continental army, poorly armed and organized, facing a line of well-trained British in spiffy red uniforms. This battle didn’t go well, the Americans lost. 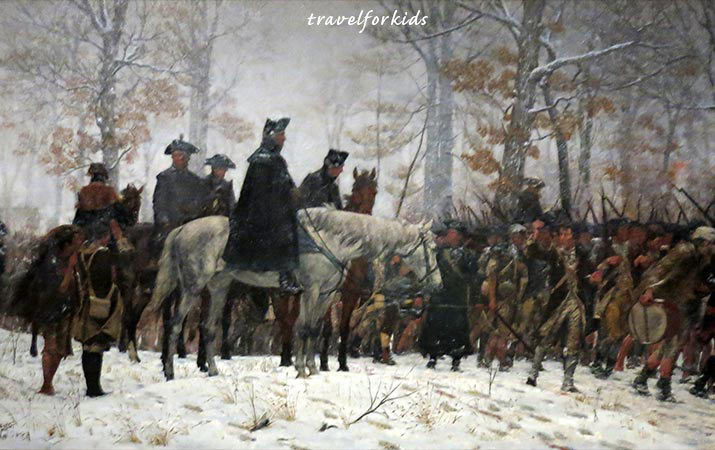 After another defeat at Germantown, in Dec. 1777 George Washington led the remainder of the Continental Army to Valley Forge. The army spent the 6 months in the winter encampment, and when they left, the army was reorganized and trained to fight the British.

Check out a fascinating collection of artifacts, such as items used in the Valley Forge encampment – spades, shovels, axes, toothbrush, spoon, bucket, wooden canteen, powder horn. Also George Washington’s own leather luggage, silver camp cups, plus a first edition of the training manual by von Steuben, and army buttons, stamped with USA on the button. 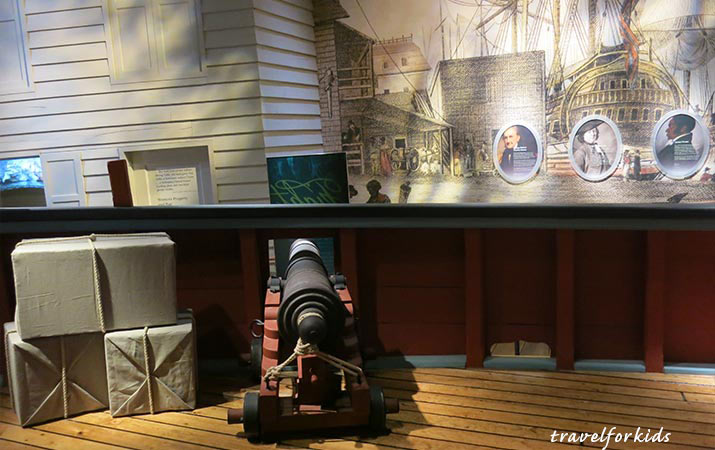 A navy was created in 1775, but the United States had few ships, and Great Britain “ruled the seas.” Instead, the Americans used small, privately owned ships, “privateers,” and sent them out to fight the British, rewarding the owners and sailors with cargos from the ships taken.

Kids can step into a replica privateer, and learn about the war at sea. Find out about the story of 14 year old free African-American James Forteen who sailed on a privateer, and check out 18th century pistols, and a telescope and musket that belonged to John Paul Jones, one of the most famous American sea captains. 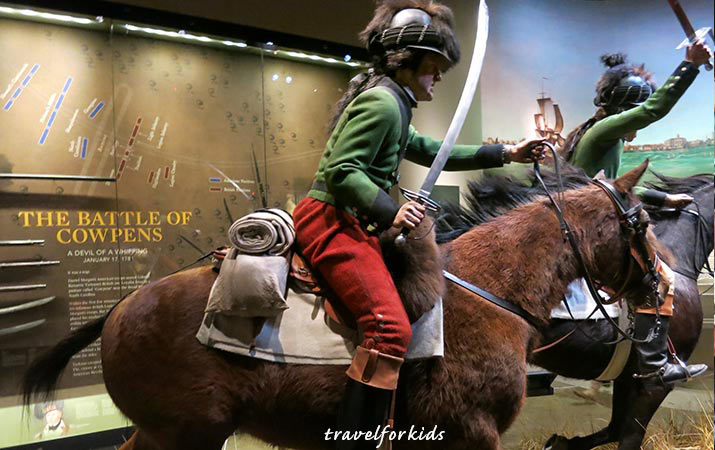 In 1779, the war moved to the South. When the British took Charleston, some Loyalists and slaves joined the British, and captured American soldiers were forced to fight with British too. Here’s a re-created moment in the Battle of Cowpens, on horseback are British Loyalist soldiers. 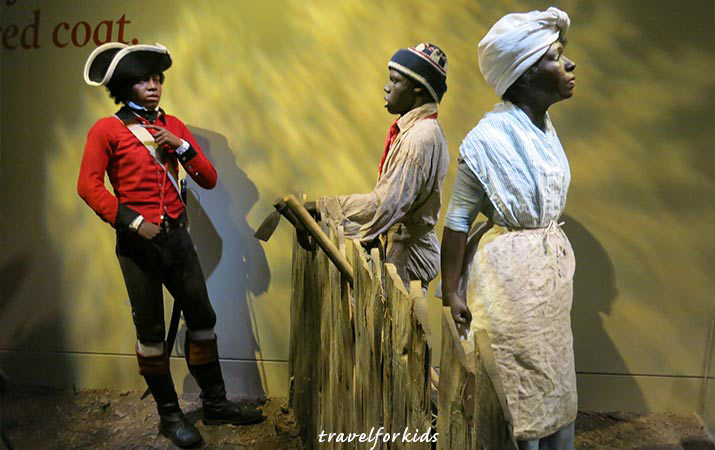 “Freedom wore a red coat.” For enslaved African-Americans, joining the British was a way out of slavery – the British promised freedom.

In this scene are a conversation between two enslaved Virginians and fifteen year old Pleasants London, an African-American Loyalist soldier, who joined up in 1781 and escaped his Virginia plantation.

The gallery ends with two large paintings of the Siege of Yorktown, and the surrender of the British. 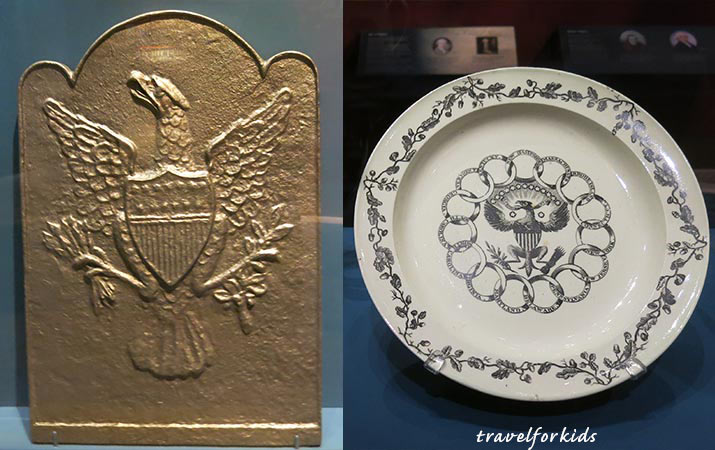 After the war ended, George Washington was the first president, but forging a new nation was difficult.

In homes, previous British symbols were replaced with eagles, the new symbol of the American republic, and rings representing each of the united states. Watch a movie for a first hand experience about writing the Constitution, and kids can sit in a replica of the “rising sun” chair used by George Washington at the convention. 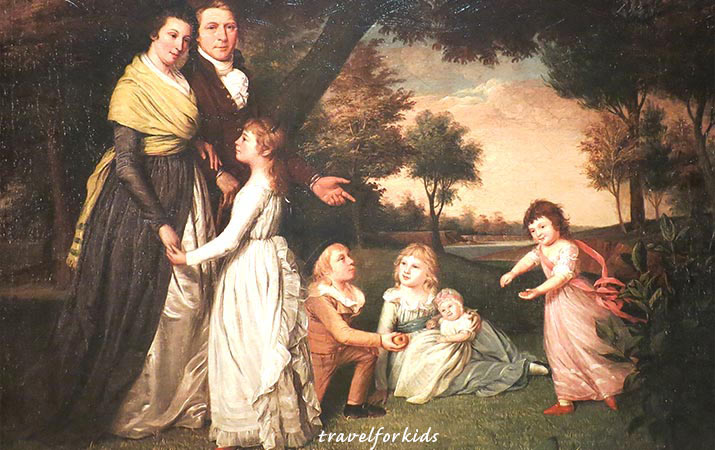 Other exhibits focus on the role of women, and importance of education. Kids can browse a replica student notebook to see homework from centuries past, and try sewing stitches.

And don’t miss photographs of men and women, taken in the mid 1860’s, people who lived through the American Revolution! 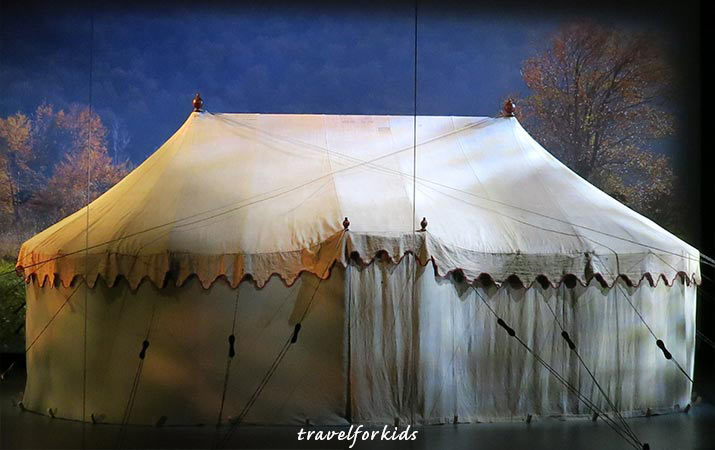 Save this theater experience for last, for us it’s a highlight of the museum.

The multimedia presentation is the story of a canvas tent used by George Washington as commander in chief of the Continental Army. The tent was both his headquarters and sleeping quarters throughout the war, and has been preserved to this day!

The tent is also a symbol of George Washington’s dedication to his troops and leadership – “first in war, first in peace, first in the hearts of his countrymen.”

Tip: On Travel for Kids Find more fun things to do with kids in Philadelphia. 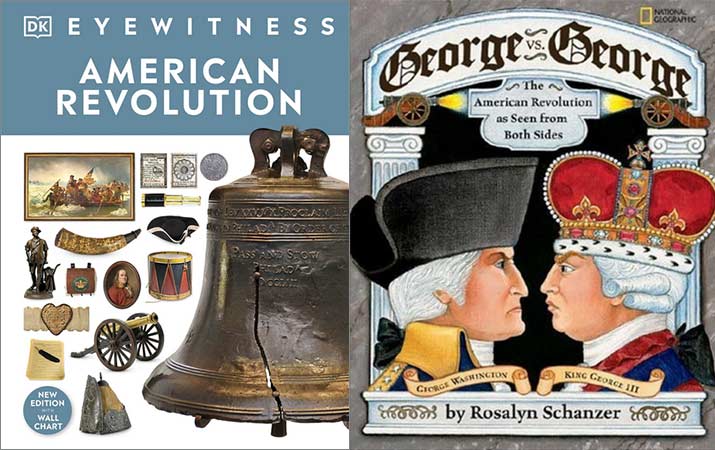 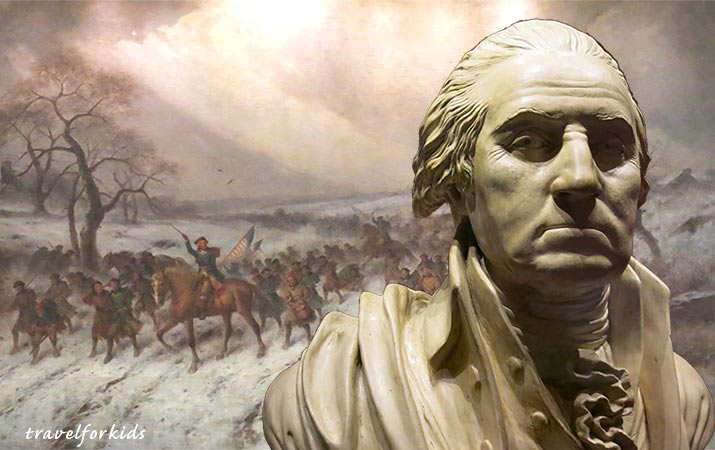