Valley Forge is not a battlefield.

During the American Revolution, from December 1777 to June 1778, Valley Forge was the winter quarters of the Continental Army, led by George Washington.

In December 1777, George Washington wrote, “I am convinced, beyond a doubt, that unless some great and capital change suddenly takes place … this Army must inevitably be reduced to one or other these three things. Starve, dissolve, or disperse.”

When we visited on spring break, looking out over rolling green hills and flowering trees, this is very same landscape where 9,000 soldiers sheltered in log huts, overcome with disease and starvation, lack of blankets, clothing, even shoes, living in rain and snow.

A trip to Valley Forge with kids brings to life a critical chapter in the American Revolution. Under George Washington’s leadership, the army stayed together, young soldiers survived terrible hardships, learned to fight as an organized army, continuing on to defeat the British.

Start with the exhibits in the Visitor Center to learn about life in camp and how to make an army. 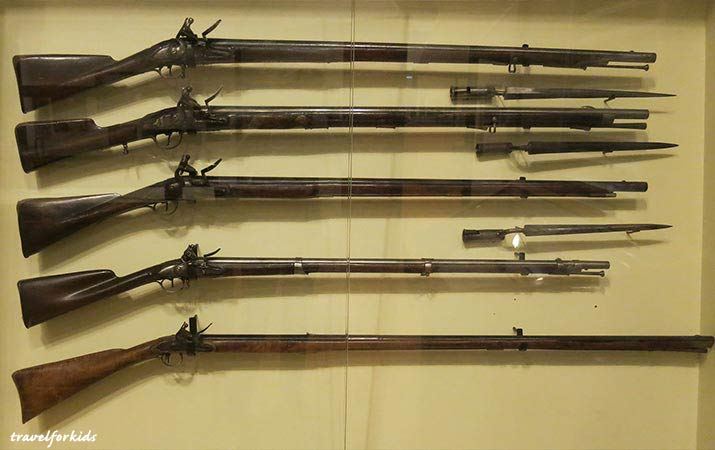 Kids can see different kinds of weapons, bayonets, muskets and hold up a replica musket – how would it feel to carry a heavy musket like that all day?

It’s also fascinating to see cooking equipment and list of what the soldiers were provided to eat (they cooked for themselves). For the first months, food was very scare – the local farmers sold their wheat and meat to the British, who had more money than the Continental Army short on cash. Soldier’s rations were flour (mixed with flour to make firecakes) or bread, peas, beans, some beef, or pork, whiskey, rum, vinegar (for scurvy).

Head over to the theater to watch a movie with re-enactments of life at Valley Forge – cold and snowy environments bring the hardships to life.

Also in the Visitor Center, pick up maps, browse the bookstore with good selection of children’s books, there snacks and cold drinks, and get tickets for the trolley tour (perfect way to see Valley Forge if you don’t have a car). 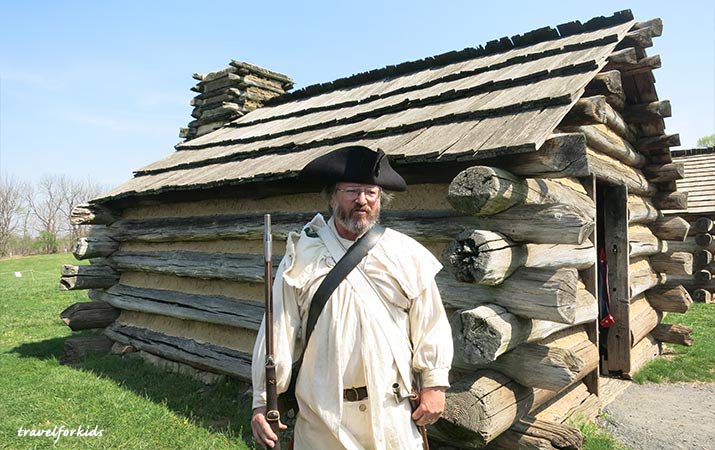 It’s a short walk from the Visitor Center to the Muhlenberg Brigade log huts. Take the path that goes by Redoubt No. 2, stopping to look out over the defensive position from this vantage point. 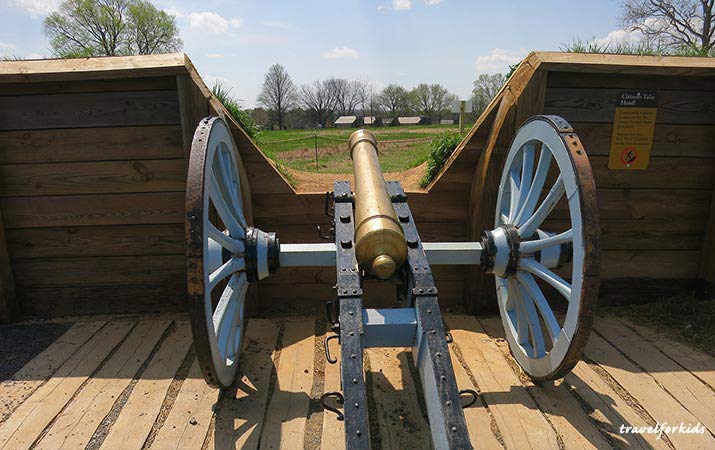 The Redoubt is an earthwork defense, built to make it difficult for the enemy to attack. An outer trench is lined with sharp stakes, also the parapet wall is fortified with branches and rocks. From this hilltop, the Continental soldiers could have seen the British coming from miles away!

Washington set up a line of five redoubt defenses earthworks around the encampment. Barely twenty miles way was the British army, which occupied Philadelphia. The British never attacked Valley Forge that winter, but Washington was prepared. 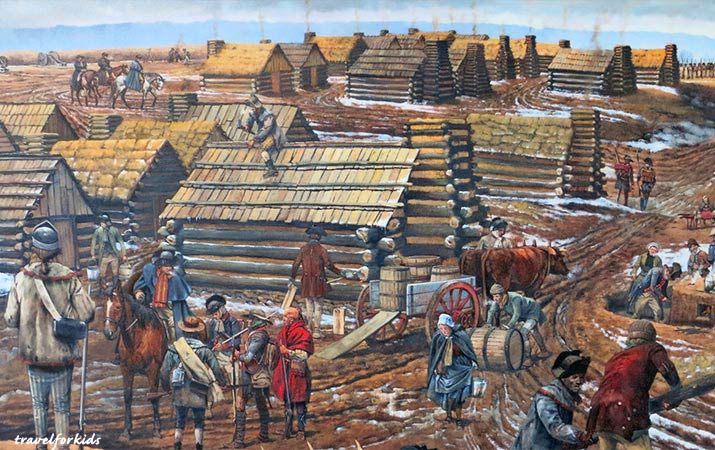 This line of replica log huts are reconstructed from accurate descriptions of 2,000 log huts that provided shelter for thousands of men. The soldiers built the “city” of huts themselves, digging the dirt-floor foundation and cutting up the wood with primitive tools. 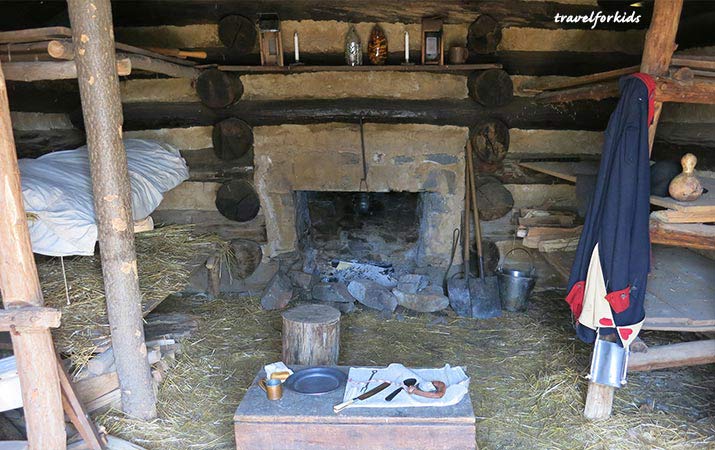 Twelve people lived in the hut, and it was crowded. Fortunately, soldiers didn’t have much stuff – their musket, blanket bedroll, perhaps a knife, journal, soap, eating utensils and cooking equipment.

In summer, by the huts are Living History programs – musket and live cannon demonstrations, cooking and bread baking (soldiers had to cook for themselves). 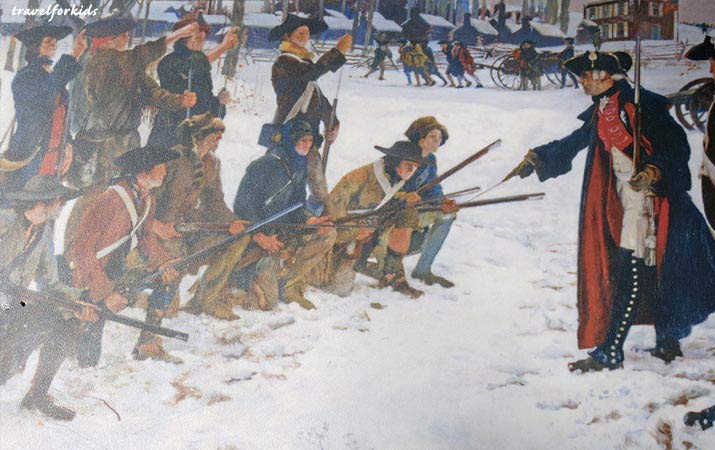 A key aspect of life at Valley Forge was training young men to work together as an organized army. Benjamin Franklin hired Friedrich von Steuben, an experienced German-speaking European military officer, and sent him to Valley Forge.

Von Steuben drilled the soldiers constantly on the parade ground, marching them in formations, practicing firing muskets on command and charging with bayonets. 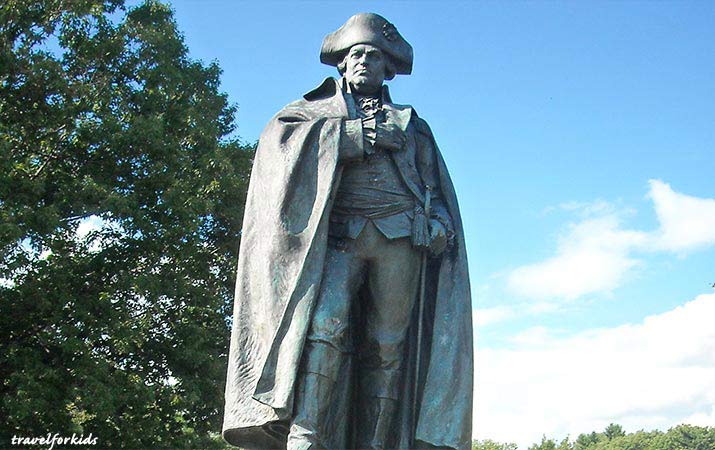 Stop to see the statue of von Steuben on the J. P Martin Trail (also there’s a parking lot on Inner Line Dr.) From the statue, kids can look out over the grassy grand parade area, and imagine the new Continental army, a disciplined army, ready to take on the British. 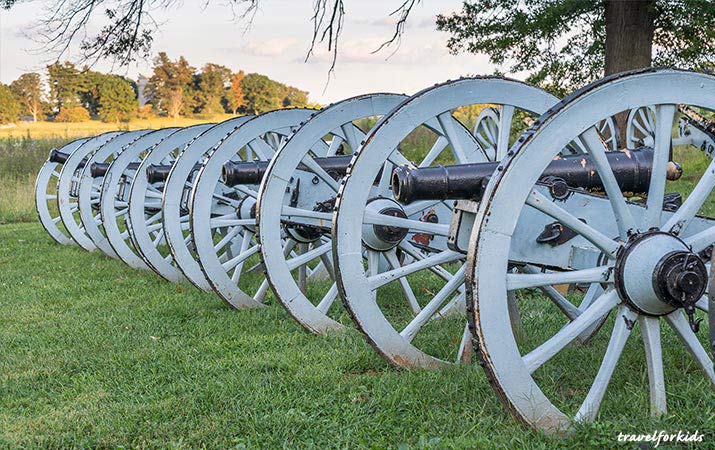 In Artillery Park are lines of cannons. The cannons were positioned in the center of the encampment, to keep them safe from the enemy and for maintenance.

On May 6, 1778, at a public ceremony for the entire army, George Washington reviewed all the troops, the cannons were fired 13 times (for each of the thirteen states), muskets were fired in unison, and the soldiers cheered “huzzahs” for Washington. 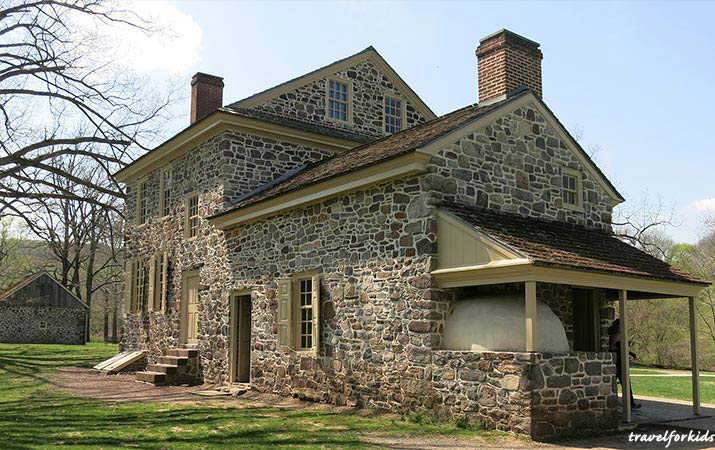 When the Continental Army arrived at Valley Forge on December 19, 1777, there were no accommodations for the soldiers. In the cold winter weather, soldiers, officers, and George Washington pitched their canvas tents.

George Washington stayed in his marquee tent, until Dec. 24, when he moved into this stone house that became his headquarters. (Tip: See Washington’s original tent in the Museum of the American Revolution in Philadelphia.)

As commander in chief of the Continental Army, Washington had to deal with inadequate supplies of food, he needed to get clothes, blankets and shoes for the soldiers, set up camp hospitals for the sick, and keep tabs on the British nearby in Philadelphia.

The house accommodated not only George Washington, but also his aides John Laurens and Alexander Hamilton, and Martha Washington, who arrived in February and stayed the whole time.

Martha Washington was a big help at Valley Forge – she cooked, sewed clothing for the soldiers, visited the camp hospital, and was very popular with the troops. 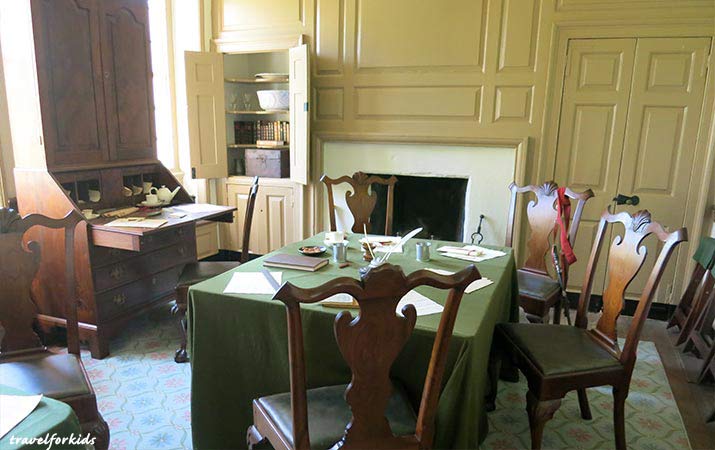 Downstairs, see the room where Washington met with his aides and officers, on the left is his personal desk. 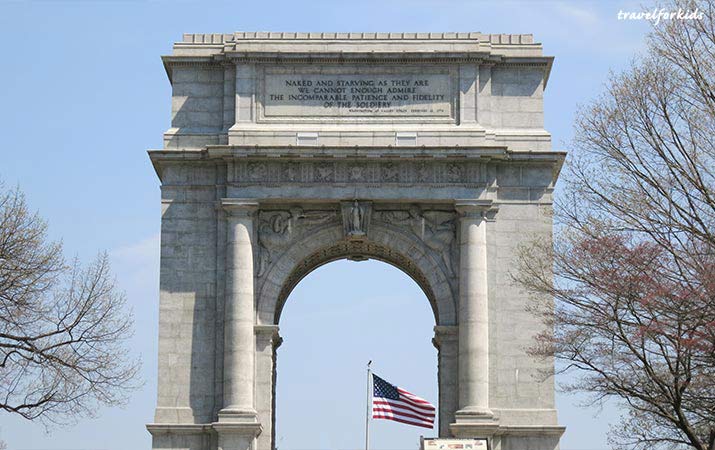 The National Memorial Arch, erected 1917, celebrates the officers and soldiers of the Continental Army. George Washington’s words are inscribed on the arch:

J.P. Martin Trail – With older kids, continue walking down this trail, a five mile loop trail that circles back to the Visitor Center.

Walking this trail, kids will get a sense the superb choice to make Valley Forge the winter encampment. This is a hilltop, with visibility to the south, to the east is Mt. Joy, which they controlled, to the north is the Schuylkill River, a natural barrier.

Mt. Joy Trails – Hike through the forests to the top of Mt. Joy, with views all around. Pick up trails at Washington’s headquarters, or from the Artillery Park parking lot.

Tip: Valley Forge is open year round, to see it in winter would be very authentic. During winter months, the Muhlenberg huts are open, Washington’s headquarters are weekends only.

Children’s books to read, and information about visiting Valley Forge on Travel for Kids.

Also, find more fun things to do with kids in Philadelphia, and check out our list of Philadelphia family hotels. 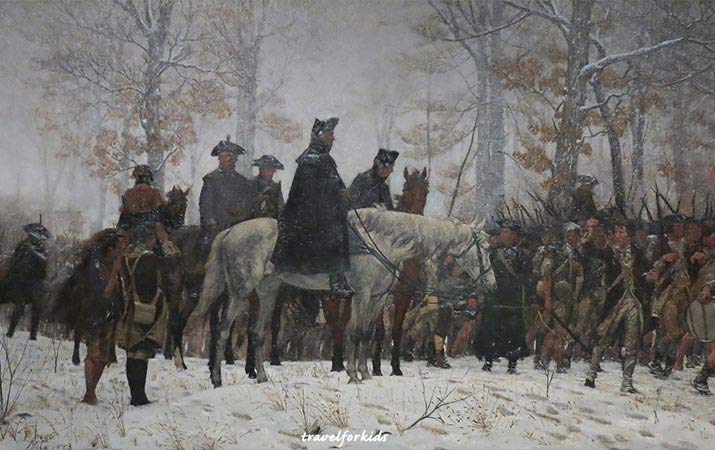