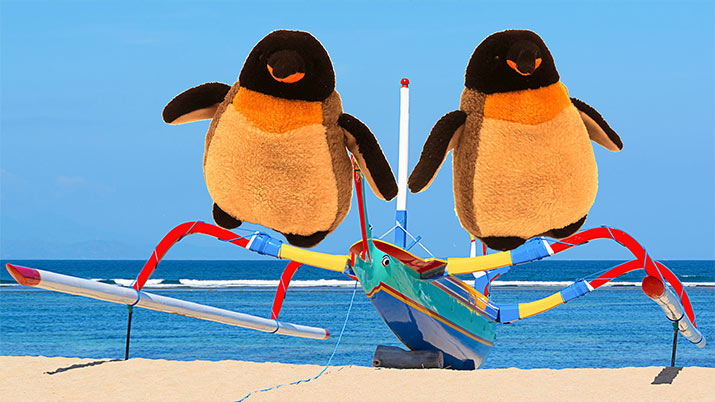 Packing for our first family trip abroad to Bali, I told my two boys, ages 6 and 8, they could pick one stuffed animal to take along.

Our kids are like vanilla and chocolate, different in many ways, but this time, their decision was identical – they chose two small chubby penguins called the “Pengos” or “Pengo Brothers.”

Coincidentally, a tag on the stuffed animals said “Made in Indonesia.” The boys said with confidence, “We’re bringing the Pengos back home.”

In fact, the Pengos had just started their travels to destinations around the world. 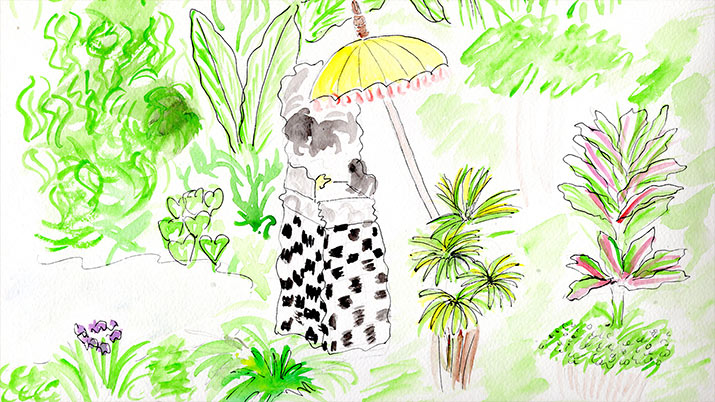 In our rental house in Bali, the Pengos made themselves right at home. A walk down a path along the rice fields, steps up through a carved stone gateway that was the way into our house yard. The airy spacious two-story house with shaded veranda was surrounded by a snug, lush tropical garden and towering coconut palms.

During afternoon rainstorms, the boys played with the Pengos, propelling them around on toy wooden cars we’d bought in the open air market.

At bedtime, the boys carefully placed the Pengos, like benevolent guardians on the headboards above their beds. Pengos were joined by the sounds of unfamiliar birds and very loud frogs in the warm humid darkness. 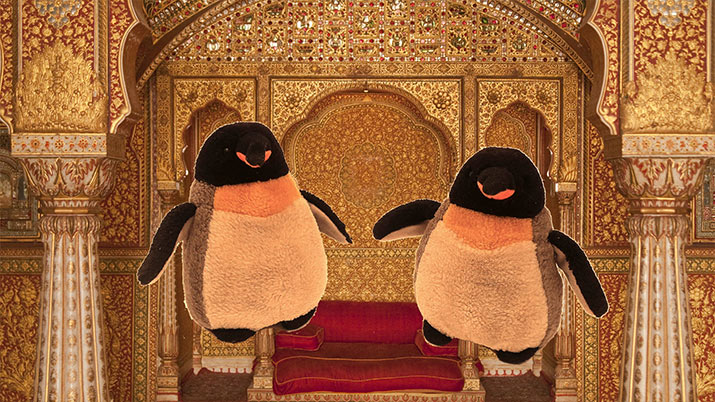 The following year, we trekked off to India, and Pengos came along. We were on the move a lot, traveling to new places almost every day. Snow in Mussorrie, palaces of Rajasthan, canceled trains. No matter how complicated our travel arrangements, the Pengos were always calm and unflappable.

Riding in the back of a camel cart, piled high with luggage and bedding and odd cooking equipment for a camel safari, Pengos took it in stride. The camel might be foaming at the mouth and snorting loudly, but Pengo Brothers were serene.

At night, they were tucked in with each boy in his sleeping bag, beaks poking out, dreaming under the stars in the Indian desert.

Once or twice, we had to retrieve the penguins from spots where they might have been forgotten. For Christmas, we stayed in a festive “tent” palace in Jodhpur. Our tent was fit for royalty – walls and ceiling covered in brilliant yellow and red fabrics, shimmering bedspreads shot with golden threads, pillows and draperies everywhere. Just the place for a Pengo to get lost.

When it came time to leave, our taxi driver was waiting, but Pengo was missing. Since I’m the perennial finder in the family, I did a quick mental check. “Think like a penguin, think like a penguin.” First place to look was under the beds, but no Pengo. Moments later, as I slid my hand between the bed and wall, there was Pengo, tangled up in yards of fabric. The adventurous penguin was packed into our luggage and made it back safe and sound. 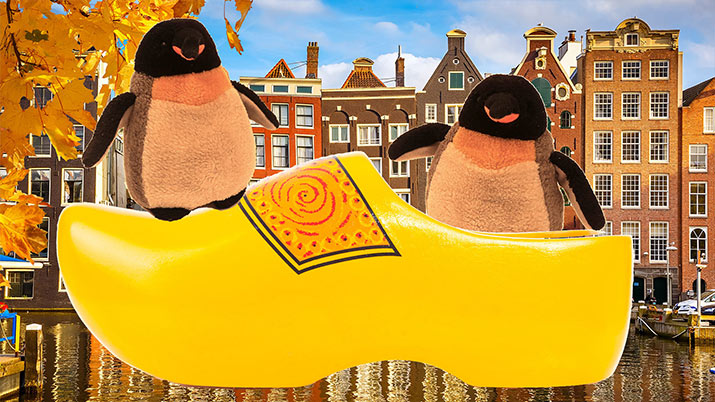 When the boys were in 3rd and 5th grade, we spent four months abroad.

On the plane to Amsterdam, when my younger boy started rummaging around his day pack, he pulled out something soft and brown, like some kind of magic act. This squishy stuffed animal was a hermit crab called “Hermity.”

Hermity, the kind of guy who takes his home with him, was a stowaway.

My boy explained with a note of defiance, “Hermity won the stuffed animal lottery and a free round trip ticket to Europe.”

That fall we collected more friends for the Pengos – two “Hogsters” (wild boars) from a department store in Amsterdam, red and yellow Eiffel Towers from Paris, camels and hippos from Egypt.

When we returned home, our new traveling animals were given a special spot on the shelves in the boy’s rooms. But only the Pengos continued to travel.

The next year on a spring break trip to the Yucatan, my boys discovered “accessories” for the Pengos.

In Merida we were shopping for Mexican hats for the kids, when the boys spied miniature sombreros in the store. The tiny sombreros, red or black velvet trimmed with silver and decorated with embroidery, were a perfect fit for Pengos. 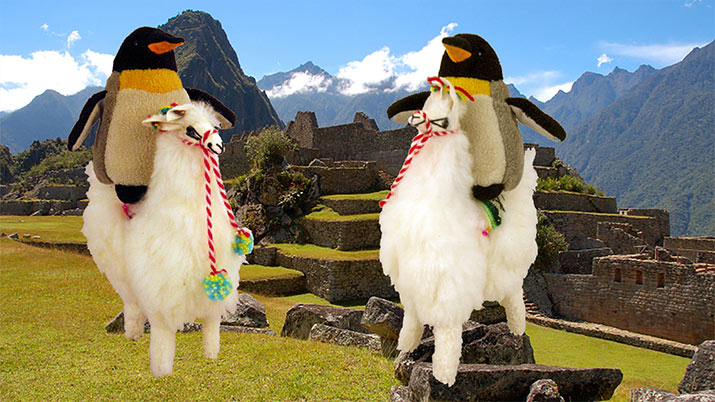 One summer, we headed to South America, and everywhere we traveled, there were more accessories and stuffed animal friends.

At the Otavalo market in Ecuador, we bought fluffy llamas and miniature ponchos and red felt hats for the “penguinos.”

The Pengos were ready for our next stop – Machu Picchu.

At Lake Titicaca, we visited the Floating Islands and rode on reed boats in the lake. We brought back miniature boats for the Pengos too. 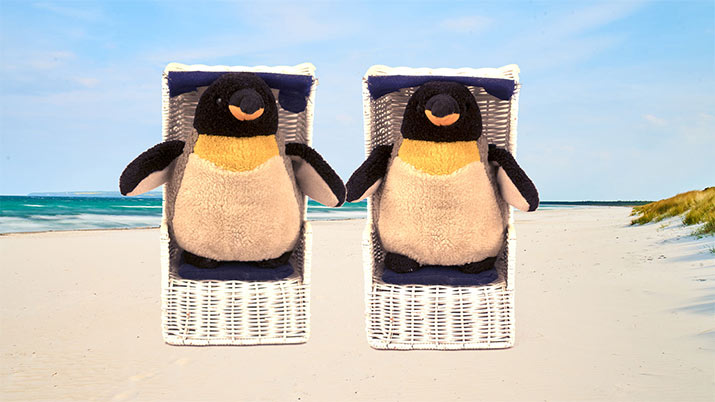 On a trip to Germany one summer, we vacationed in Rugen, an island resort in the Baltic Sea. The boys, now 11 and 13, tossed the Pengos into their luggage along with their grubby tee shirts.

The beach at Binz is chock-full of rattan beach chairs, as far as the eye can see. Amidst the jumble of stuff in a souvenir shop in town, we spotted two little white beach chairs with blue cushions (“strandkorbs”), just big enough for the Pengos.

The Pengos had become our trip talisman. No longer the snuggly toys for two little boys, the Pengos are now world travelers, comfortable everywhere.

Tips for traveling with stuffed animals

Pick a small toy – Take one that doesn’t take up much space and packs easily (leave the giant bears, hippos and rhinos at home.)

Don’t take the most treasured stuffed animal – There’s a small chance that your animal traveler may get misplaced and end up an expatriate.

Make sure your plush toy is washable – You never know what may end up on your beloved toy – from crushed crackers to the results of a distressed stomach. Pick a color that won’t show the dirt.

Pack your stuffed animals in carry-on luggage – If your checked luggage gets lost, the kids can still go to sleep with their snuggly animals. 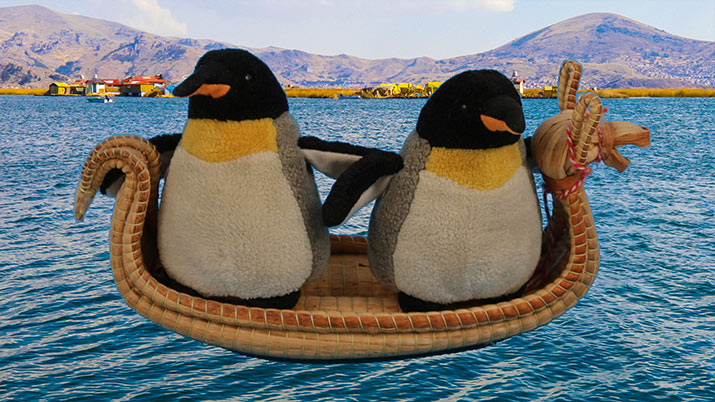