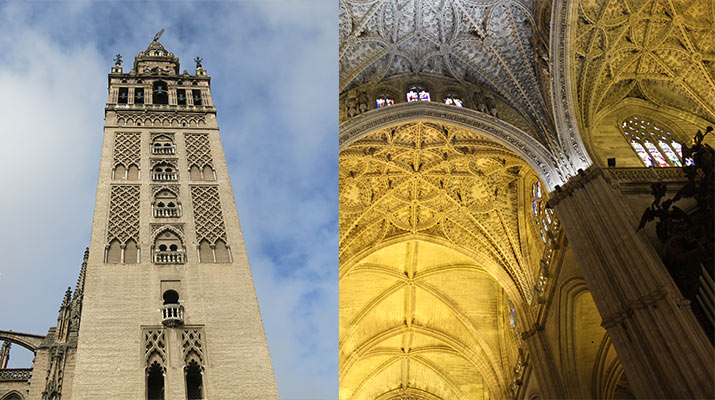 Seville Cathedral and its Giralda bell tower is the heart of Seville. The cathedral is the largest Gothic church in the world, but is also built over a 12th century mosque, and the Giralda is Islamic in design. Inside the church, kids will see the tomb of Christopher Columbus, gold and silver treasures, a majestic golden altar, and can climb up to the top of the tower for panoramic views of the city.

In the 12th century, Seville was the capital of Islamic Spain. In addition to a magnificent mosque, a beautiful new minaret was built for the muezzin to call the faithful to prayer. The foundation of the tower uses old stones from Roman or Visigothic eras, but the tower is solidly constructed with lovely Islamic-style interlaced brickwork and double arches.

Originally the top of the minaret was decorated with gilded bronze balls. When the King Ferdinand III (San Fernando III) conquered Seville in 1248, the mosque became a church, and the balls were replaced with a cross on top. In 1401, the mosque was torn down, except for the tower and Patio de los Naranjos, and replaced with this magnificent Gothic cathedral. A Renaissance belfry was later added in the 16th century, and the tower crowned with a large bronze weathervane, figure of Faith (Giraldillo) turning round and round atop a globe. 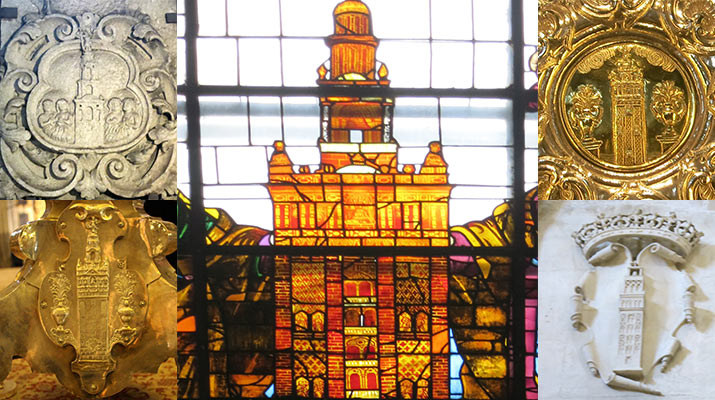 Tip: The Giralda is such an important symbol, look for Giralda images throughout the cathedral – in a stained glass window, carved stone, a golden candlestick or tray, on white plaster wall decoration (shown here). 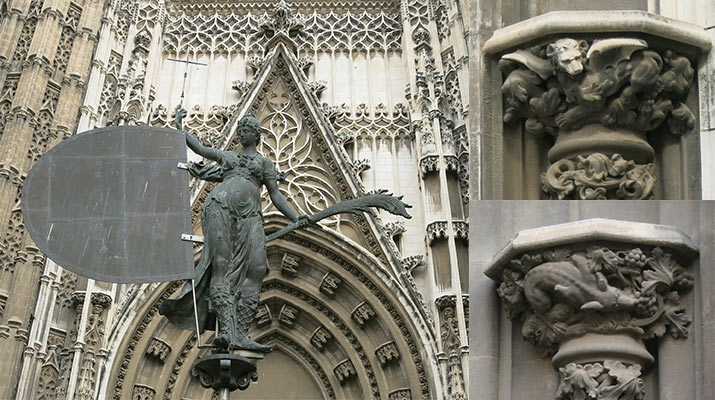 The ticket line and entrance to the cathedral is on the south side of the church, at Puerta de San Cristobal. While waiting in line, check out a full-size replica of the weathervane on the Giralda. Also, on the church doorway, look for Gothic creatures – winged lions, dragons, etc. 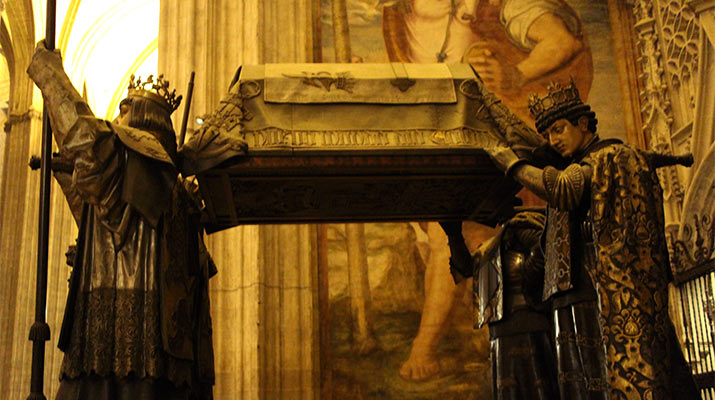 Once inside the cathedral, look up at the high vaulted ceiling, covered with lacey designs. Then make a beeline for the monument and tomb of Christopher Columbus.

After all his voyages, Columbus died in Spain, and was buried in a monastery here in Seville, but then moved to Santo Domingo, on to Cuba, and finally back here to Seville. 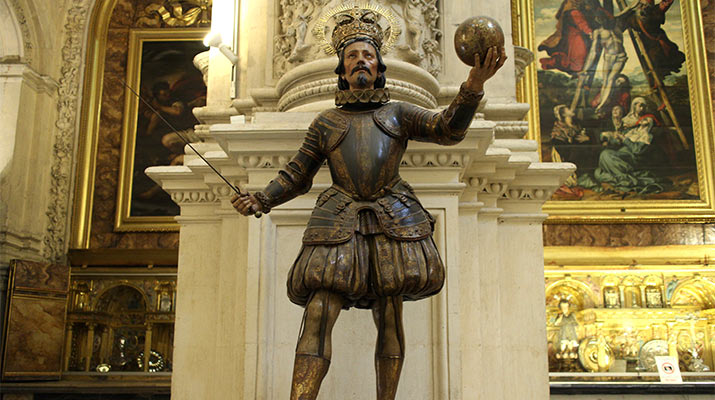 Continue down the nave, and turn right into the Main Sacristry (Sacristia Mayor). A gorgeous room, look for images of the Giralda on white swirly plaster wall decorations, and also on a silver reliquary underneath the paintings.

The large statue in the center is Ferdinand III holding a globe and sword. In the 13th century, King Ferdinand lead Christian armies that defeated the Muslim-ruled cities of Cordoba and Seville, and was designated a saint in the 17th century.

Also in the Sacristy are reliquaries (with sacred relics), and statues of a cherubic baby Jesus and graceful Virgin Mary. 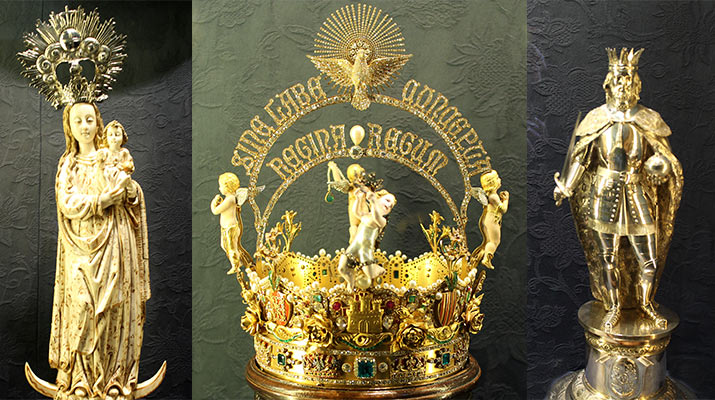 The most spectacular item is the Crown of the Virgen de los Reyes, ornamented with precious gems, diamonds (angels have diamond wings), and pearls. The angel in the center is made from a single pearl! 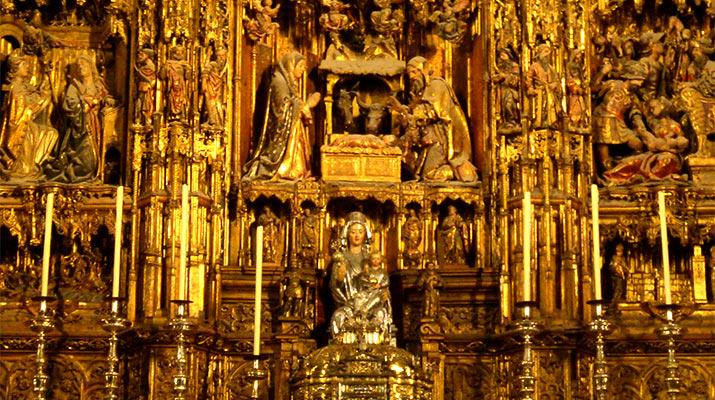 From the Treasury, head over to the Main Altar (retablo) in the middle of the church (Capilla Mayor). The altar has 45 different scenes from the life of Christ and the Virgin Mary, saints at the top level.

At the bottom of the altar in the center is Mary Virgin de la Sede, a silver statue of Mary with Jesus on her lap. Above her is a panel with the nativity in Bethlehem. Just to the right, look for scene of Seville with the Giralda and cathedral.

Tip: Although the altar is immense, one of the largest in the world, it’s some distance away. Bring binoculars to see all the intricate scenes, carved in wood and covered in gold.

Climb up the Giralda tower 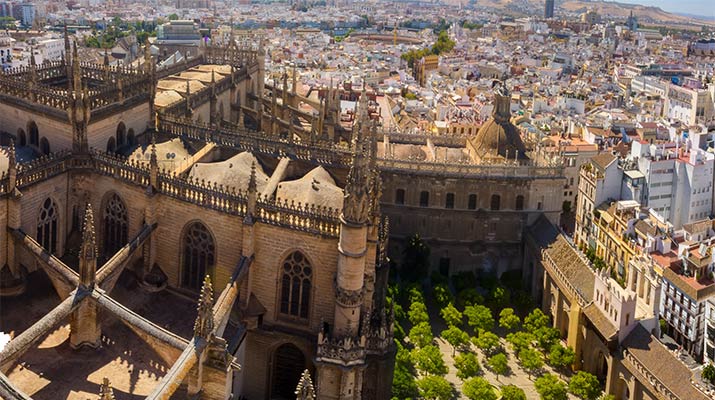 From the main altar, head over to the entrance for the Giralda (the tower is included in the cathedral ticket). It’s easy for kids to climb up the wide sloping ramps to the top.

Along the way, stop to look out the windows at the Gothic architecture and decorations – gargoyles, mythical creatures, coats of arms. Also, at different levels are exhibits about the church – an original 14th century door with Gothic letters and words of the Koran, medieval tombstones, church clock, tools used in Gothic construction.

At the top is the belfry – and the bells are still in use, you’ll hear them while in the cathedral.

Walk all the way around the gallery for 360 degree views of the rooftops and streets of Seville. And look down on the enclosed courtyard with orange trees – this is the Patio de los Naranjos, part of the original mosque. 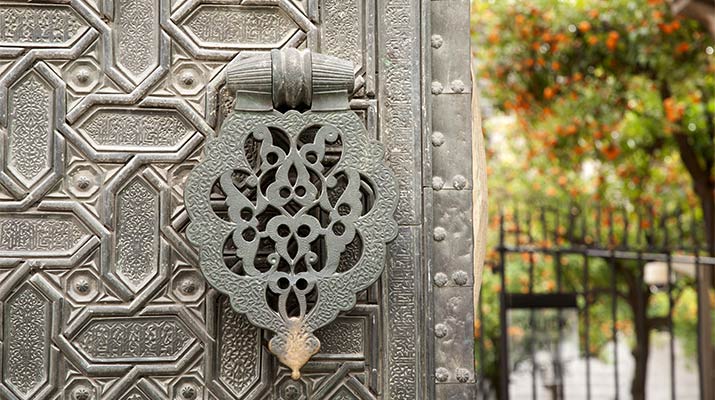 After climbing back down the tower, exit from the cathedral through Puerta del Lagarto to the Patio de los Naranjos, a peaceful spot with orange trees and cooling fountains.

Just outside the Puerta del Lagarto, look up – and there’s a scruffy wooden alligator hanging from the ceiling. It’s a remembrance of a stuffed alligator given by the Sultan of Egypt to King Alfonso X.

In the 12th century, this courtyard was the entrance to the mosque. Worshippers used the fountains to wash their face, hands and feet before going inside.

As you exit out the Puerta del Perdon, the bronze doors are decorated with elegant Arabic script and door knockers in Islamic design. And look back at the Patio de los Naranjos, framing the Gothic spires of the cathedral. 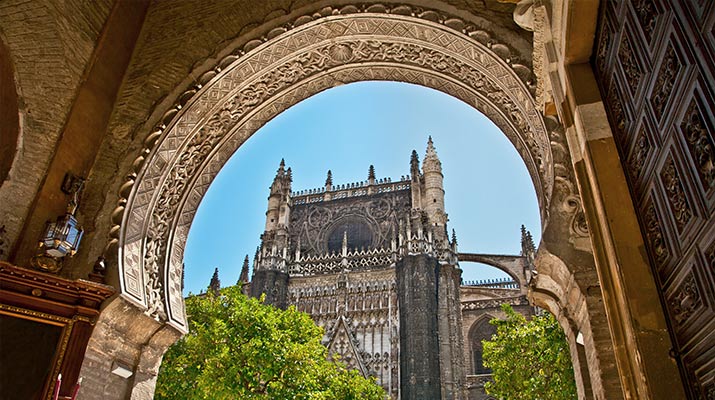