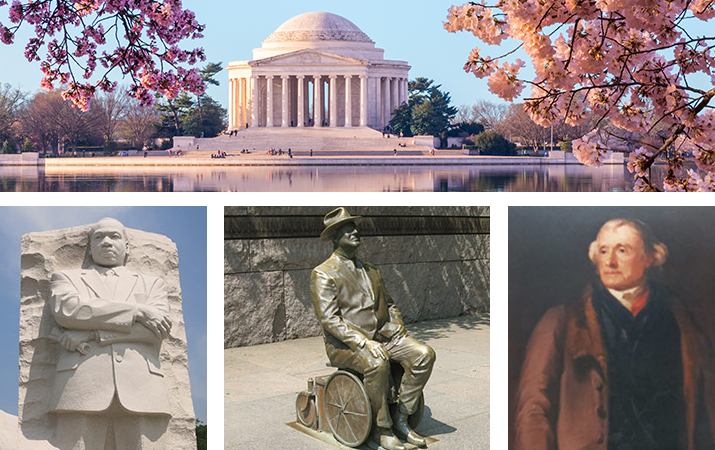 Around the Tidal Basin in Washington DC are three memorials to Martin Luther King, Jr., Franklin Roosevelt, and Thomas Jefferson.

In the memorials are inscribed quotations spoken or written by these extraordinary men.

Thomas Jefferson is the primary author of the Declaration of Independence, Franklin Roosevelt is president of the United States during World War II, Martin Luther King, Jr. is a leader of civil rights for all.

Their words are timeless, their ideals and actions in the history of the United States speak to us today.

Every nation must now develop an overriding loyalty to mankind as a whole in order to preserve the best in their individual societies.

I believe that unarmed truth and unconditional love will have the final word in reality. This is why right, temporarily defeated, is stronger than evil triumphant.

Injustice anywhere is a threat to justice everywhere.

The structure of world peace cannot be the work of one man, or one party, or one nation … It must be a peace which rests on the cooperative effort of the whole world.

We hold these truths to be self-evident, that all men are created equal, that they are endowed by their Creator with certain inalienable rights, among these are life, liberty, and the pursuit of happiness, that to secure these rights governments are instituted among men.

I am not an advocate for frequent changes in laws and constitutions, but laws and institutions must go hand in hand with the progress of the human mind. As that becomes more developed, more enlightened, as new discoveries are made, new truths discovered and manners and opinions change, with the change of circumstances, institutions must advance also to keep pace with the times.

On Travel for Kids, find more fun things to do with kids in Washington DC, and also our selected list of Washington DC family hotels.