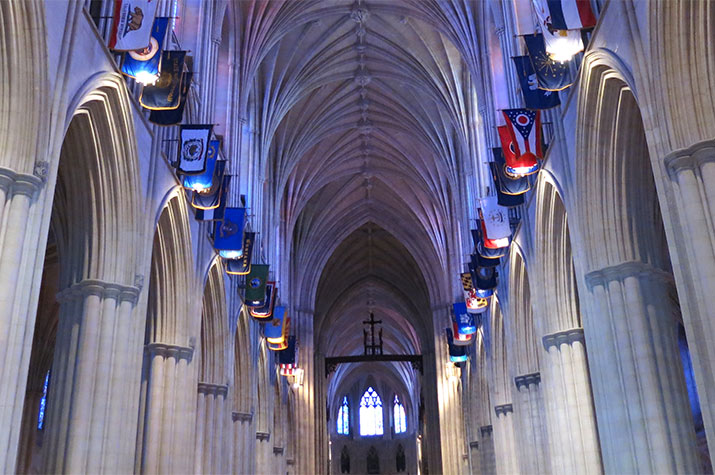 Washington National Cathedral in Washington DC is a church with a national focus.

The idea for the church dates back to to 1791 when Pierre L’Enfant, under the direction of President George Washington, came up with the idea of a national cathedral, but construction didn’t begin until 1907.

The cathedral is immense, the tallest building in Washington DC, and is constructed of white limestone in a Gothic style with flying buttresses, stained glass windows, high vaulted ceilings, towers, gargoyles on the exterior.

Much cheaper than a trip to Europe to visit medieval cathedrals, a visit with kids to Washington National Cathedral is a way to experience a Gothic church, but one that’s also very much American. 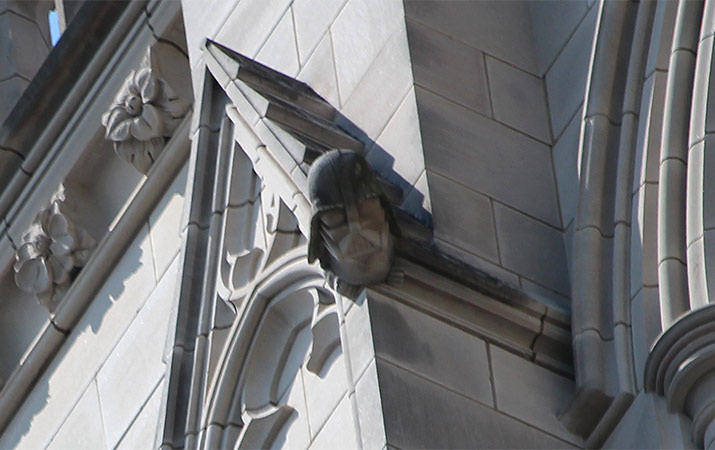 Before going inside the church, walk around the church exterior to look at all the sculptures. Some of the carvings are gargoyles, those that function as rain guttter. Other carvings are decorative sculptures with no specific function.

On the exterior, look for gargoyles shaped like monsters, dragons, griffins, animals, or people. On the northwest tower, one of the most popular decorative sculptures is Darth Vader, way high up.

Bring binoculars, and even then, it’s not all that easy to see. Here’s detailed directions to locate the sculpture:

Why is Darth Vader on Washington National Cathedral?

National Geographic magazine had a competition for kids to design decorative sculptures for the church, Darth Vader was a third-place winner. The dean of the cathedral wasn’t too thrilled about this bad guy, so the sculpture is stuck up high, out of the way.

In the cathedral foyer, look for seals of all 50 states in the United States.

Also flags of each state fly in two long rows above the nave (photo at top). 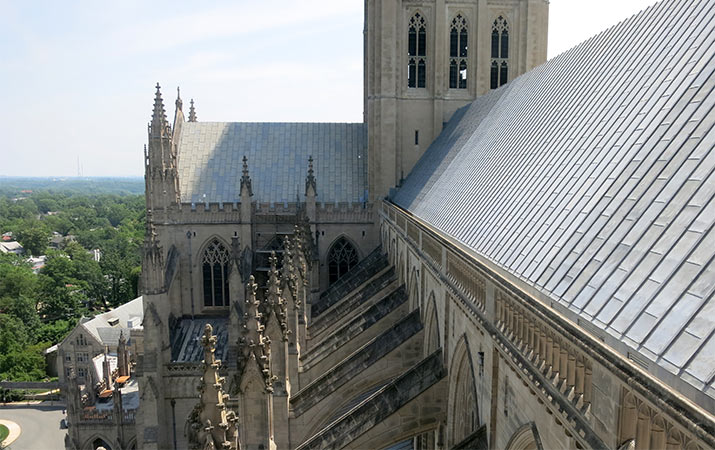 Before continuing through the cathedral, take the elevator up to the Pilgrim Observation Gallery.

Here kids will get a sense of just how high the cathedral really is, and can look over the nave crossing and flying buttresses, typical of a Gothic cathedral. 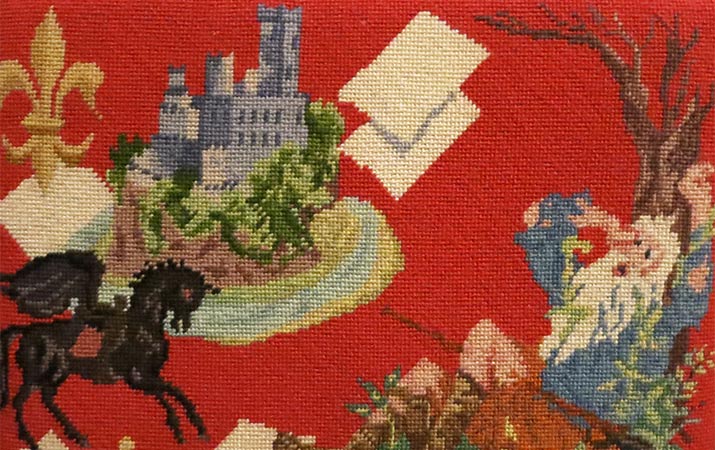 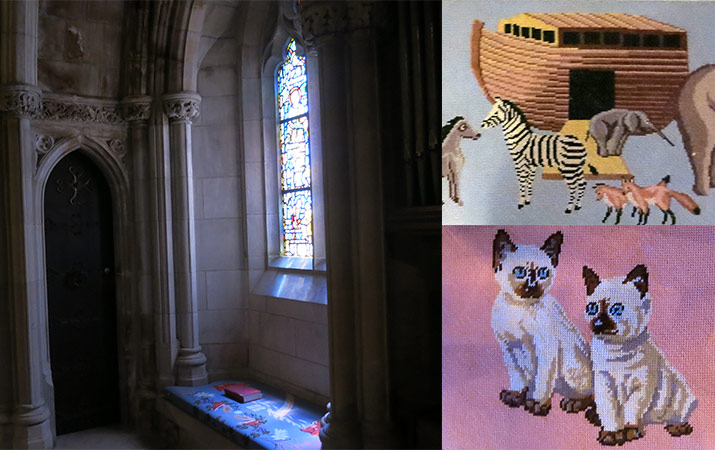 Next door, the Children’s Chapel is delightful for younger kids. Built in on a mini scale (sized for a six year old), at the entrance to the chapel is statue of the Christ Child, inside all the chairs are kindergarten size, even the organ is tiny. 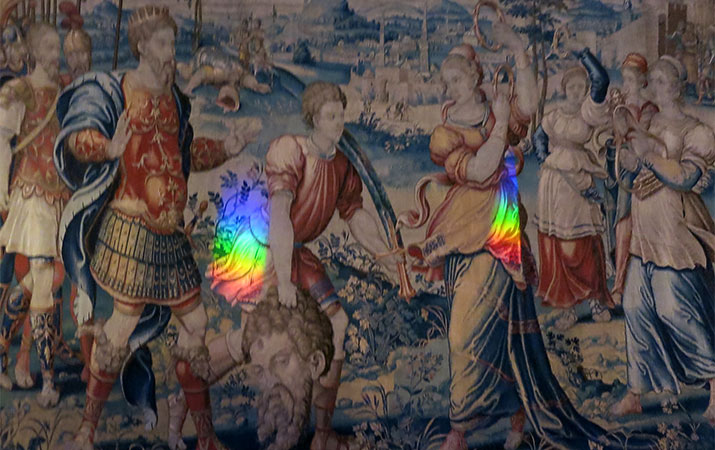 Around the high altar, on the walls in St. Mary’s chapel are 16th century tapestries with scenes of David and Goliath.

Five tapestries portray David approaching King Saul (wearing the crown) and offering to fight Goliath, refusing a spiffy suit of armor, attacking Goliath with his slingshot, subduing an unhappy Goliath on the ground, and greeted in triumph as David returns after defeating Goliath (shown here, rainbows are from the stained glass windows). 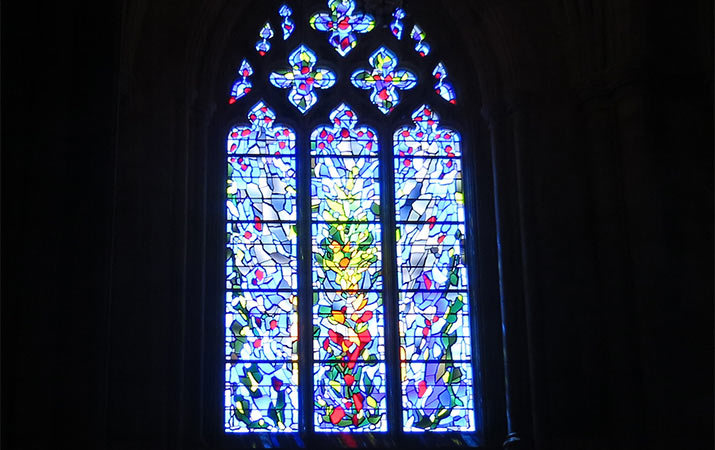 As you wander around the cathedral, check out three large rose windows, and many stained glass windows with scenes from the Bible, war memorials, Lewis & Clark’s expedition, and a space window (with a piece of moon rock). The self-guided tour booklet identifies all the stained glass windows.

Tip: To get the cathedral with metro and bus, take the Metro to Dupont Circle, walk over to Massachusetts NW and take the N6 bus north.

And find more fun things to do with kids in Washington DC on Travel for Kids.