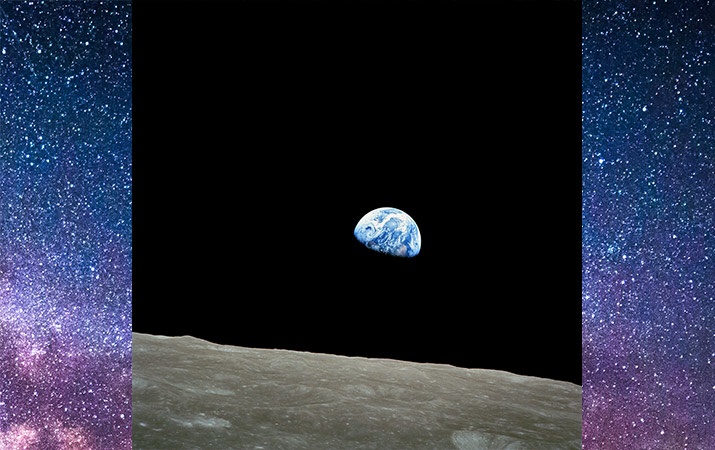 Fifty years ago, on December 24 1968, Apollo 8 spacecraft orbited the moon.

For the first time, astronauts Frank Borman, Bill Anders and Jim Lovell saw Earth from the depths of space, and took a photo that changed the world.

This photo is called Earthrise.

Bill Anders remembered “when I looked up and saw the Earth … and Earth that was the only color we could see, a very fragile-looking Earth, a very delicate-looking Earth, I was immediately almost overcome by the thought that we came all this way to the Moon, and yet the most significant thing we are seeing is our home planet, the Earth.”

Walter Cronkite, famed TV anchorman said, “the major impression I think it made on most of us is the fact, how ridiculous it is we have this difficulty getting along on this little lifeboat of ours float there out in space, and the necessity of understanding each other and of the brotherhood of humankind on this floating island of ours.”

The photo also prompted a new environmental awareness our planet.

A correspondent for Science magazine wrote “I suspect the greatest lasting benefit of the Apollo mission may be … this sudden rush of inspiration to try to save this fragile environment – the whole one – if we still can.”

The poet Archibald MacLeish composed this poem “Riders on the Earth.”

“To see the Earth as it truly is, small and blue and beautiful in that eternal silence where it floats, is to see ourselves as riders on the Earth together; brothers on that bright loveliness in the eternal cold – brothers who know that they are truly brothers.”

And read about about the historic space flight:

Apollo 8: The Mission that Changed Everything by Martin W. Sandler.