On May 10, 1869, the transcontinental railroad was completed at Promontory Summit in Utah, connecting the United States from coast to coast.

Celebrating this historic event, four special spikes were tapped in a railroad tie – the last spike was almost solid gold. Turns out, there was more than one golden “Last Spike.” Years later a second original Last Spike appeared – it was the “Lost Spike.” 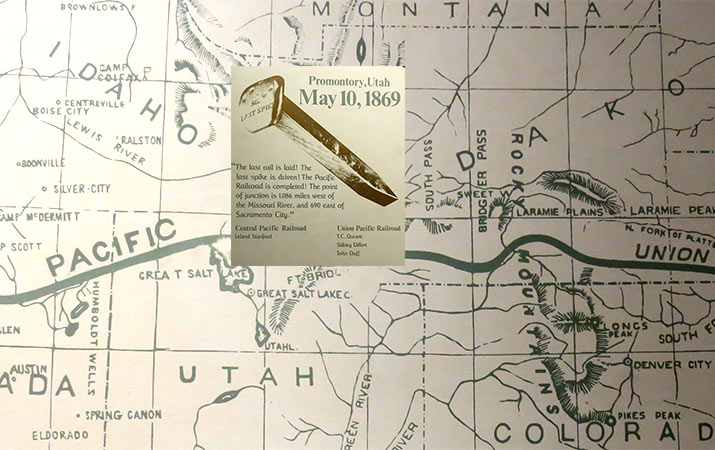 It was quite a competition between the two companies, but the tracks were finally joined together at Promontory Summit.

The railroad company presidents and other bigwigs gathered on May 10th for a ceremony on the tracks. Each company sent a special train to celebrate the event – Jupiter from the Central Pacific, No. 119 from the Union Pacific. Arriving from east and west, the two trains chugged up the track.

Track workers laid down the final pair of rail tracks in the center.

After speeches, one by one, four commemorative spikes were tapped (not pounded like regular spikes) into a fancy polished railroad tie. 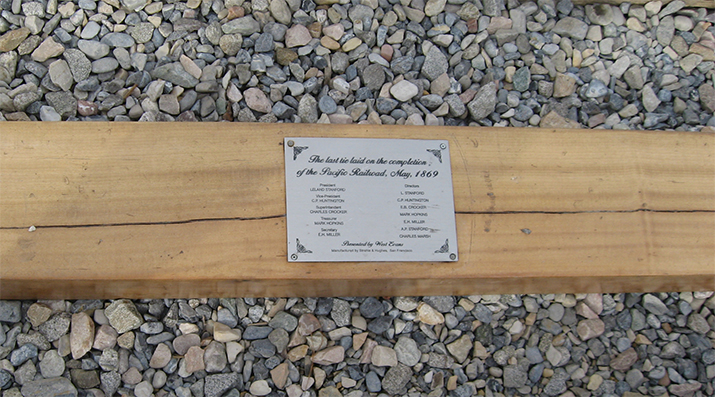 The first spike was iron, silver and gold, the second Nevada silver, the third a (less) gold spike, the Last Spike was three-quarters solid gold.

The Last Spike (Golden Spike) is inscribed with the words “The Last Spike” on the end. The spike has the names of Central Pacific officers, the words “The Pacific Railroad – Ground broken Jany 8th 1863, completed May 8th 1869,” and “May God continue the unity of our Country as the Railroad unites the two great Oceans of the world. Presented by David Hewes San Francisco.” 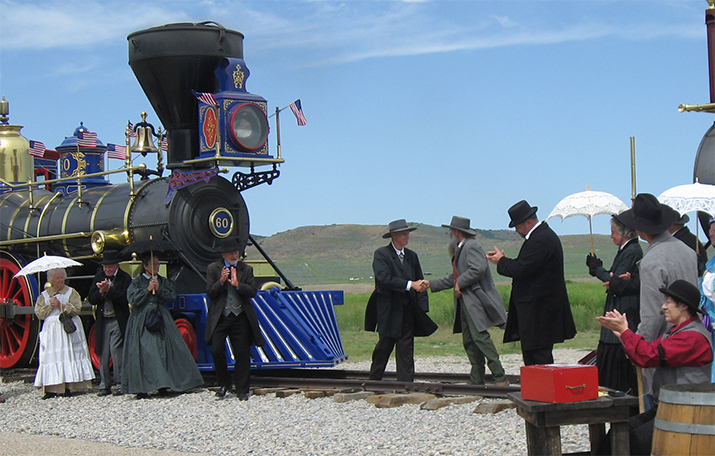 When you visit the Golden Spike National Historic Site, from May 1 to Labor Day kids can see exact replicas of the Jupiter and 119 locomotives chugging down the track, On Saturdays are re-enactments of the ceremony with people in period clothing.

The museum has excellent exhibits about building the transcontinental railroad, and a replica of Last Spike.

During our visit to Golden Spike National Historic Site, we took a hike down the Big Fill Trail. It’s a short section where it took two months for 500 laborers to fill a huge gully with dirt for the rails. Imagine laying 1,700+ miles of track across the continent through snowy mountains, forbidding desert wilderness, and every iron spike and rail had to be transported to the work site, without a railroad. 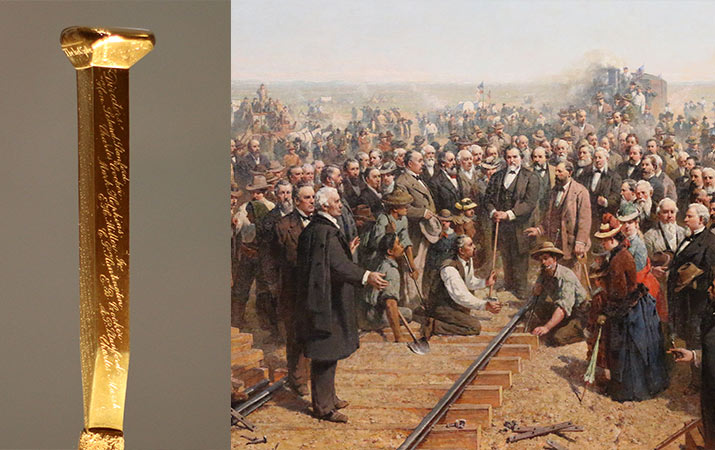 So where is the original Last Spike(s)?

Leland Stanford was one of the directors of the Central Pacific Railroad. Stanford’s brother-in-law David Hewes provided the Last Spike for the ceremony at Promontory Summit. Years later, it was discovered Hewes also ordered a second, identical golden Last Spike, now called the “Lost Spike.”

The “Lost Spike” golden spike is on display in the excellent California State Railroad Museum in Old Sacramento. Find the Lost Spike, along with the “Last Spike” painting (above), just behind the big black Southern Pacific cab-forward locomotive in the museum.

Books to read about building the transcontinental railroad: